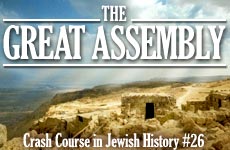 Extraordinary sages define the essence of Judaism for the Jews of Israel and the Diaspora.

The Men of the Great Assembly -- in Hebrew, Anshei Knesset HaGedolah -- was an unusual group of Jewish personalities who assumed the reigns of Jewish leadership between 410 BCE and 310 BCE. This time period follows the destruction of the First Temple, and includes the early decades of the Second Temple, up until the invasion of the Greeks, led by Alexander the Great.

Realizing that the Jewish people were growing weaker spiritually, a group of wise leaders came together -- expanding the Sanhedrin, the Jewish Supreme Court, from 70 to 120 members -- with a special aim of strengthening Judaism. Initially gathered together by Ezra, they defined Judaism in this tumultuous time when prophecy and kingship were all but gone from the Jewish people.

Among them we count the last of the prophets Haggai, Zechariah and Malachi, as well as the sages Mordechai, (of the Purim story), Yehoshua, (the High Priest), Nechemia (the chief architect of rebuilding of Jerusalem), Shimon HaTzaddik (also a High Priest).

Keep in mind that at this time the Talmud has not yet been compiled. Knowing how to live a Jewish life depends on knowing the commandments of the Torah and their interpretations and applications which have been passed down orally -- in short, knowing what is known as the Written Torah and the Oral Torah, both of which date back to Moses' teachings at Sinai.

It is impossible to understand the Written Torah without its Oral complement. For example, when the Written Torah states: "And these words which I command you today shall be upon your heart ... and you shall write them upon the door-posts of your house and upon your gateways," it is the Oral Torah that explains which "words" the Written Torah is referring to, and that these words should be penned on a small scroll and affixed to the door frame. Without the Oral Torah we wouldn't know about the mezuzah and countless other ways of day-to-day Judaism.

The destruction of the first Temple and ensuing exile were incredibly traumatic experiences for the Jewish people: The Temple and its daily service were gone as was the monarchy. The Jews found themselves in an alien land with none of the normative institutions fundamental to Judaism. (Ironically, the Jewish world is still in the same situation. The difference is that after 2,500 years the exile is so comfortable that what is really an abnormal situation is now accepted as totally normal) As the Jewish people struggle with the aftermath of exile, accurate transmission of this oral tradition becomes essential. And here is where the Men of the Great Assembly make the greatest contribution.(1)

As we see in history, to the extent that the Jews stop living according to Jewish law and tradition (i.e. that which makes them Jewish), to that extent they assimilate and disappear. Therefore, the contributions of these men can be said to account to a large measure for Jewish survival.

The Mishna pays them great homage:

Moses received the Torah from Sinai and conveyed to Joshua, Joshua to the Elders, the Elders to the Prophets, and the Prophets to the Men of the Great Assembly ... Shimon HaTzaddik was one of the remnants of the Great Assembly. He used to say, "The world stands on three things: on the Torah; on the service of God, and upon acts of loving-kindness..." (Ethics of the Fathers, 1:1)

THE CONTENTS OF THE BIBLE

In addition to insuring the accurate transmission of the Oral Torah, the Men of the Great Assembly decide which of the multitude of Jewish holy writings should be in the Bible. The Jewish people have produced hundreds of thousands of prophets (both men and women). Which of their writings should be preserved for future generations and which had limited applicability?

The Men of the Great Assembly make this decision and give us what is known as the Hebrew Bible today -- or the Tanach. (Tanach is a Hebrew acronym which stands for Torah, Prophets, Writings.)

This is what the Christians call the "Old Testament" but traditionally Jews never call it that. "Testament" is derived from the Latin word testari meaning "to be a witness." The Hebrew Bible was named the Old Testament by the Christians because of their belief that God cancelled the covenant he made with the Jews and made a new covenant, "New Testament," with the followers of Jesus. As Jews deny that God would ever "change His mind" after promising the Jews they would be His "eternal nation", they find that term insulting.

The Hebrew Bible consists of the five books of the Torah, eight books of the prophets (the last of which consists of twelve short books) and 11 books of various writings, which include the Psalms (largely attributed to King David), the writings of King Solomon (Song of Songs, Proverbs, Ecclesiastes), the books of Job, Ruth, Esther and Daniel etc.

The last thing that the Men of the Great Assembly do is formalize prayer. They actually begin a process which is not finished until the 2nd century CE, after the destruction of the Second Temple, but they lay down the key principles and basic structure of formalized prayer.(2)

During the First Temple period, there was no need for formalized Jewish prayer liturgy, because God's presence was more manifest. It was much easier for the individual to have a close, intense, personal relationship with God. Additionally, a great deal of what is now the object of prayer was formally accomplished through the offering of sacrifices and the Temple service. Of course, when the Second Temple was rebuilt, sacrifices resumed, but most of the Jews had not returned to the land of Israel and therefore had no access to this medium of connecting to God via the Temple. In addition, as mentioned previously, even with the Temple rebuilt, the connection during the Second temple period was much weaker.

The centerpiece of each selection of prayers (repeated three times a day) is the Shmonei Esrai, "The Eighteen Blessings." Each "blessing" is stated in the plural, to underscore the interdependency of the Jewish people, and each blessing is rooted in Torah and Kabbalah.

The mystical depth of this prayer -- a masterpiece of writing by the Great Assembly -- is astounding. For example, the blessing for healing is composed of 27 words, corresponding to the 27 words in the verse in the Torah (Exodus 15:26) where God promises to be the Healer of the Jewish people. It is said (Nefesh HaChaim 2:13) that the text of the Shmonei Esrai is so spiritually powerful that even when recited without intention, feeling or understanding, its words have a great impact on the world.

Through Divine inspiration and sheer genius the Men of the Great Assembly were able to create out of the ashes of a physically destroyed nation, a spiritually thriving people. Their work defined and anchored Jewish religious and national identity and created focus, unity and uniformity for the Jewish people, no matter where in the world they might be scattered.

The last surviving member of the Great Assembly was Shimon HaTzaddik. Under him, according to the ancient historian Josephus (Contra Apion 1:197), the Jews of Israel prospered and Jewish population in the land reached 350,000.

It helped the Jews physically (if not spiritually) that the Persians were such benevolent dictators. But the picture was about the change with the growing power of the Greek Empire looming on the horizon.

1) See Talmud-Nedarim 37b; Kiddushin 30a
2) See Talmud-Megillah 17b. The process was completed after the destruction of the Second Temple by the Sanhedrin in Yavne. In addition to prayer, the Men of the Great Assembly also instituted the blessings said before and after food and the performance of various commandments as well as Kiddush and Havdallah before and after the Sabbath.