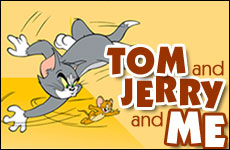 Am I brave enough to believe?

"Are you all right?" my older brother asked concerned. He was 9 and I was 5.

I sat sobbing in front of a cartoon episode of Tom and Jerry. "Why do the cat and the mouse always have to fight?" I screamed out. "Every episode, again and again. Why can't they just be nice to each other?"

Some big brothers save their little brothers from getting beaten up; my big brother protected me from losing my sense of hope that the world could be a caring place. One day he showed up at the soccer field with a gift for me. Pulling me aside with the hush of someone uncovering a rare sapphire, he revealed a sight I had never seen -- a blue smurf. I recall experiencing a sense of inner peace as he described the smurf world. Smurfs got along. They couldn't show off because they all wore white uniforms that helped you focus on each smurf's identity -- Handy, Sleepy, Chef and the kindly elder Papa Smurf. Smurfs skipped and sang and all appreciated the qualities and quirks of the others. Together they were a great society, for me anyway.

For the next few years I left behind the world of competitions, cliques and popularity and escaped happily into the mushroom houses of my smurfs. At age 11, when I got into punk rock, I told my parents that if they didn't take me out of public school, my previous clique that I'd abandoned -- a gang of heavy metal rockers -- would murder me. My parents acquiesced.

There were three other Jews at St. John's, my new Episcopalian parish school. We wore blue uniforms. Except for the fact that I had to attend church every day, it was almost like being a smurf. They even asked me to sing along with them. I was so honored that I would sing louder than everybody else till I got the name JC, at which point I would be silent. By the end of ninth grade, as president of the student body and star of the debate team, the headmaster expelled me for an incident where I challenged him and he had to back down. He agreed to take the expulsion off my record if I'd agree to leave.

There was a person within me, waiting to come out.

The thought of going back to public school -- to be taught by teachers who wanted to be there less than me, where I moved my pencil and not my mind -- was unbearable. I did the next best thing to dropping out -- I moved to Europe. My first six months as an exchange student, I was almost unable to communicate in my new foreign language. I grunted and made signs to get what I needed. It was great. Without the pressure to be popular or to achieve, I discovered the power of silence. For years I'd been patching myself up with personas -- the heavy metaller, the skater, the punk, the student body president, the athlete. I was trying too hard to be somebody that others would find impressive, to get the approval I was looking for. I did not realize that there was a person within me, someone very and special waiting to come out.

I was 16 when I met myself. One day I was writing in my journal and my pen refused to go. I stopped writing and said to myself: Okay, you tell me what you want to write. My pen began to express thoughts and feelings that I didn't know I had inside me. In the awkwardness of that personal encounter, I quickly squashed the moment and went back to putting on the personas I thought would get me ahead in life. I began writing poetry, and modeling for artistic photo shoots. I grew long curly hair, a goatee and Salvador Dali moustache. By the time I arrived in New York City for college, I'd disassociated myself from the American kid I was before. The other college kids assumed I was European. I didn't correct them.

Everyone has certain considerations when picking a college. Great professors, party school, or resume prestige. I chose Vassar because I was told that a Vassar student "is likely a musical prodigy, speaks two extinct languages, and got straight B-minuses in prep school." Maybe I'd at last find a playground of under-achiever dreamers who had a love for what the world could be, but not the system running it. Maybe together I'd be in the graduating class that would redesign society. Maybe the 40-60 male-female student ratio would also spur my idealism.

My bohemian appearance gained me immediate entrance in the Vassar clique who titled themselves the BPs -- the Beautiful People. The clique was a mirror of my worst qualities.

My business was to spread joy.

I left Vassar and vowed to get as far away from Western culture as I could. So I moved to Russia. It was just then that the Soviet empire was falling apart. A nation of 250 million citizens were broken and waiting for someone to show them the way. I arrived at age 19 with no college degree. Everyone was gray and sullen, amidst the wreckage of a world power. My contribution was to spread joy. I opened a nightclub. Every weekend people would show up and smile. Our crowd would go on to re-invent Russia -- music producers, fashion editors, Time and CNN reporters, oil men and artists.

Luckily, I got out of the nightclub business before the Chechen mafia got me. Instead I became a media and advertising guy in the great movement producing Russia's new youth culture. So what did I do? I started importing all the Western ideas I'd escaped. We became the first team to paint the shambles of Russia with a happy face and a gaudy Versace jacket.

Then one day my friend Arkady, a 24-year-old put in charge of 25 percent of the world's nickel supply, asked me if I wanted to go scuba diving in Eilat, Israel.

Israel?
I thought to myself. I'd only go scuba diving in a place that had more to offer beyond the coral reefs. The Bahamas or Fiji maybe, but not Israel. I told Arkady I would go, but only in a year after I had read up on the meaning of Israel and its people.

The Exodus, the Holy Land, Exile -- the more I read the more confused I became about who the Jews were, and who I was. Worse, though, was when it became clear to me that one day my own children would ask me why we were Jewish and I would have no answers.

I figured that to get a true taste of something, you drink from its source. If you want Islam, go to Mecca. Buddhism, go to China. Hinduism, go to India. I wanted to know what Judaism was about, so I decided to look for Jews in Israel who really believed in it. I'd decipher if they were fanatics, or if they had been transporting something valuable through the desert of their difficult history.

Songs from the Heart

A year later I showed up with my luggage in the sandstone of the Old City. "Welcome to Jerusalem!" The man who met me looked right past my shorts, black t-shirt, designer sport coat and very long curly hair. I'd never before seen an observant Jew, but this guy was down-to-earth and congenially upbeat. He brought me to a window outside a shul where bearded men were swaying intensely in silence. I wondered for a second whether I'd walked into Children of the Corn.

"Did you always dress like this?" I later asked many of the young men I saw praying. "No, I was a Wall Street banker… No I was a Harvard law student…" the answers came. Each one, stripped of his social costume, shared with me the love of being Jewish: the MIT scientist who spoke of the universe with the wonder of a child, the ex-gang leader who sat and taught me to read the Jewish alphabet, a modern dancer whose sensitivity to spirituality was as subtle as beautiful choreography.

The smurfs were sweet, but this was better.

Like a big brother caring for his little brother, they reached past my image and pulled me aside, as if to say: "Calm down and look. I have something precious to show you." As each opened his treasure in Torah for me, I found myself gazing at ideas I'd always intuited, but had never been brave enough to believe in.

The smurfs were sweet, but this was much better. These were real live Jews and I was one of them. These Jews sang songs from the heart, held hands to support one another, and wore a uniform in order to focus on each other, as opposed to focusing on themselves. Nobody tried to stand out, yet each one was unforgettable.

Of all the reasons I had ever seen people join together -- to get rich or become famous, to look good or to feel good, to be beautiful or to compete -- I'd never before seen people come together for the purpose of becoming better people, and sincerely desiring the same for me.

At last, I understood what I'd been crying about, sitting in front of the TV, as Tom and Jerry were fighting.

My Nazi Grandfather Would Have Shot Me

Body Image, Eating Disorders, and Living a Jewish Life
It Takes A Lot Of Faith To Be An Atheist
How Instagram Brought Back This Nostalgic Soup
What Makes Eli Run?
Comments
MOST POPULAR IN Spirituality
Our privacy policy