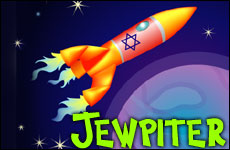 There are Jewish foods, clothing, music, books, movies, plays, cities, and a country. There are Jewish actors, singers, dancers, teachers, lawyers, and even cowboys. There is a Jewish version of nearly everything on our planet. But there has never been a specifically Jewish planet – until now.

Hold on to your yarmukles, because if you thought Jews rejoiced in 1948 when the state of Israel was founded, just wait. A team of Israeli astronomers has announced its discovery of the universe's first Jewish planet, which they have named Jewpiter. "We're qvelling," gushed lead astronomer Yitzchak Marmelstein, who along with his fellow astronomers, Pinchas Zebbel, Mendel Himmelman, and Rivka Feigenbaum were responsible for the momentous finding and are now clearly elated.

"A little ointment should clear that right up," quipped Zebbel. "We were just about to give up our 14 year search," explained Marmelstein, "when Rivka spotted it."

Feigenbaum takes up the story. "It appeared to be both glowing and complaining, if you can imagine that. It was almost as though it was saying, ‘Great, this is all I need right now – worldwide attention. Like I don't have enough problems.' That's when I suspected it could be a Jewish planet. When our equipment detected continual sighing sounds, that's when we knew for sure."

"When our astronomical equipment detected continual sighing sounds, that's when we knew for sure."

Unlike our own Earth, which has just one sun, Jewpiter has nine. "But they rarely call, unless they need something," stated Zebbel. "We astronomers refer to these as ‘Selfish Suns.' These suns then often wonder why they're left out of their planets' wills."

Preliminary infra-red imaging confirmed Feigenbaum's suspicions and shows Jewpiter's surface to be composed of what appears to be a kugel-like substance, with craters filled with a kishka-like substance.

"While we can't be 100% sure it's kugel and kishka," says Marmelstein, "we can say that if it does happen to be that, there will be no lack of sustenance for space travelers who enjoy high-cholesterol comfort food. In addition, they won't have to feel guilty about it because the zero-weight atmosphere gives one the impression that one is constantly losing weight. It's an eat-win situation."

In any case, Jewpiter seems to reveal a primitive surface that has never been warmed – "not unlike my ex-wife added Zebbel."In case she's reading this, I'm joking, sweetheart." Zebbel then whispers, "She's got a divorce attorney like a pit bull."

The most exciting part of the discovery is that there appears to be life on Jewpiter. Himmelman states, "We observed tiny life forms. The males were engaged in a variety of activities including davening, delicatessen service and wholesale jewelry sales. The women were primarily waiting nervously by the stairs for the children to return home.

Backyard astronomers with large telescopes can see the new, matzoh ball-shaped planet in the early-morning sky, in the center of the constellation Shmendrik which is in between the constellations Meshugas and Tsures

Perhaps it will not surprise you to learn that there are already vacation packages being offered to those desiring to be among the first to visit Jewpiter. Excerpts from the brochures reveal the most interesting to be:

There are already vacation packages being offered to those desiring to be among the first to visit Jewpiter.

The Born on Jewpiter Package

– How exciting it is to give birth not only on another planet, but a Jewish planet at that. And how great for your child, whenever he or she is asked their birthplace, to be able to respond, "Jewpiter." Painful birth? Probably. But no need to be self-conscious about screaming your lungs out since, as we all know, in space no one can hear you scream. Your baby will truly be out of this world!

– Transport your party of up to 100 friends, neighbors and relatives to an everything-included, inter-planetary Bar Mitzvah. Expensive? The price is $3 million – but for you -- $2.5 million, including photos. Be the first Bar Mitzvah boy in your neighborhood to be able to proclaim, "Today I am a man – in zero gravity!" Kind of beats a chopped liver swan sculpture any day, doesn't it?

– Not only are any wedding vows made on Jewpiter legally binding on Earth, they're valid throughout the universe! So don't worry about your spouse being tempted by a Venutian. Your wedding guests will recline on the actual Cloud Nine during the ceremony. They will also be required to sign a waiver absolving you of any responsibility for the effects of the locally grown "glowing" Kosher food, which has not yet been okayed by the FDA. You'll honeymoon in the Crater of Passion, which has a consistency nearly identical to that of perfectly prepared kasha.

Perhaps most interesting about the discovery is that some Jews have decided that they now have another homeland besides Israel. So don't be surprised if on Passover in the future you hear not only "Next year in Jerusalem," but also "Next year on Jewpiter."

What lies ahead for the amazing discoverers of this Jewish planet – Marmelstein, Zebbel, Himmelman and Feigenbaum? "Well, it would be really hard to top this particular discovery," admits Zebbel. "Unless there were Jewish galaxies, solar systems, or even other dimensions. We'll leave those for younger, more energetic astronomers in the future. Yet nothing excites us more than a challenge. So we've decided to attend law school and open our own firm dealing with the burgeoning new field of interplanetary law. Our names together already sound like a law firm, so we figure we've got a good head start."

In the meantime, Jewlarious congratulates the four, wishes them the best of luck on their new career endeavor, and is thrilled to bring our readers the following breaking news about an upcoming new version of one of our favorite reality shows. Later this Fall, look for "Survivor: Jewpiter."

Rabbi Gives Advice to Congregants through Twitter
Why Are The Prayers Of Yom Kipur So Repetetive?
Ha'azinu 5783: A Time for Unity!
Twisted Thinking
Comments