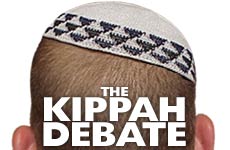 Wearing a yarmulke is no easy decision. It signifies to the world – and to its wearer – that it sits on top of a committed Jew.

The first time that I wore a kippah outside of synagogue in Canada, I was petrified. I had just got back from Israel, where I became religious and where kippahs are about as common as cellular phones. But when I came back to Vancouver, I didn't have the courage to start wearing a kippah.

However, my first Shabbat in Vancouver, I was informed that one is not allowed to carry anything on Shabbat (in the absence of an eruv, which didn't exist). That meant that after shul I couldn't put my kippah in my pocket!

What was I going to do? I had an hour walk home! What would people think of me? I didn’t have too many options.

I thought about sprinting home so people could only see a cat-like figure rushing by them.

I thought about sprinting home so people could only see a cat-like figure rushing by them which wouldn't give them time to make out my head covering. But I realized that I was not at all cat-like, and that I could probably sprint for about a block before I would fall to the ground in convulsions. So I decided to bite the bullet and walk all the way home wearing my kippah.

During that walk home, I must have looked like an escaped mental patient with a serious case of paranoia. When someone walked by me I would think to myself, "What are you looking at? Are you looking at my kippah? What's wrong with you? Haven't you ever seen a Jewish person before? RACIST PIG!"

Actually the person walking towards me was probably thinking to himself, "This man approaching me looks like he is addicted to crack. I hope he doesn't beat me up."

As the months and years went on I got more comfortable wearing my kippah and started wearing it almost all of the time.

But when I applied to summer internships at law firms in Vancouver I didn't wear my kippah to the interviews. "Who is going to hire me if I am wearing a kippah?" I asked myself. Despite the fact that Canada is probably the most multi-cultural, tolerant country in the world, I still couldn't do it.

But I discovered there were problems with not wearing a kippah at work.

My first day at the firm, they took me out for lunch to "The Spotted Prawn."

Since my co-workers had no reason to think that I was different, my first day at the firm, they took me out for lunch to a restaurant called "The Spotted Prawn."

While all of my co-workers ordered various shellfish dishes forbidden to me, I wanted to ask if the chef could make me a special dish -- like, perhaps, roasted water with a side dish of sliced water seasoned in water. Instead, I ended up ordering a salad, but I knew that I was still compromising my kashrut standards.

From then on, it was bag lunches for me.

For professional and spiritual reasons, I decided to move to Toronto. With my previous kippah-wearing difficulties under my belt, I was determined to go to my Toronto interviews wearing a kippah.

My first interview was in a downtown firm that I was really interested in. I got into the elevator, which was to take me to the 45th floor, a little nervous about the kippah thing but forging on courageously.

I noticed another guy in the elevator wearing a kippah as well. I felt immediately relieved. We struck up a conversation and I told him which law firm I was interviewing at.

"Oh, that is a great firm," he said. "Congratulations on getting an interview there." He paused for a second and then continued, "I should warn you. I've heard they don't really like it if people wear their yarmulkes to work."

I looked both ways as if I was going to set off the "kippah alert alarm."

My heart sank into the pit of my stomach. I am not sure if that was from hearing the news or because the elevator came to an abrupt landing on the 45th floor. I exited cautiously and looked both ways as if I was going to set off the "kippah alert alarm." I turned to the man in the elevator and thanked him for the advice.

"No problem," he said to me while he stepped out of the elevator as well.

"Good morning Mr. Rothstein," the receptionist said to my friend in the elevator. "Your 9:00 appointment is here to see you." My elevator buddy -- a partner at this firm -- winked at me and laughed. "Good luck in the interview. Come by my office when you are done if you get the chance."

My interview went well and I could see that my decision to wear a kippah was paying off already. Some of the lawyers told me, without me asking, that I would have no problem observing Shabbat at this firm, even in the winter months when Shabbat begins early.

The firm also wanted to take me out for dinner, but they offered to set up a get together in the office so that I could come without having to order roasted water. I didn't have to explain myself, my kippah did the explaining for me.

Once I put the kippah on they knew exactly where I stood. It was also a symbol for me to know where I stood, in that my internal "religious" thoughts and feelings had to be reflected by external actions.

You may think that I was overly neurotic about my kippah dilemma. But the fact is, that once someone puts on a kippah, he is making a statement.

For me, it is a statement to myself and to others of my commitment to Judaism and the Jewish people. After becoming more secure with my own Jewish identity, I have finally found the courage to make it.

Who Gets to Pray on the Temple Mount?

Jewish Foods You've Probably Never Heard Of
It Takes A Lot Of Faith To Be An Atheist
How Instagram Brought Back This Nostalgic Soup
What Makes Eli Run?
Comments
MOST POPULAR IN Israel
Our privacy policy