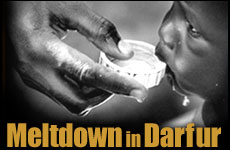 What happened to 'Never Again'?

"The genocide by attrition in Darfur is being accelerated." It is painful -- almost incredulous -- to have to repeat these words, which I first spoke at the Save Darfur rally on September 17, 2006, the first anniversary of the adoption by the UN General Assembly of the "Responsibility to Protect" doctrine (the "R2P doctrine").

Yet tragically, incrementally, the genocide in Darfur has moved into high gear, a standing repudiation of the R2P doctrine, both mocking the lessons of history while betraying the people of Darfur.

We know what is happening in Darfur and we have yet to act.

Unspeakable, because this genocide was preventable. No one can say that we did not know. We knew and we did not act. We know what is happening in Darfur and we have yet to act. The moral injunction of "never again" has become "yet again" - again and again, a particularly poignant and painful reminder as the UN has just commemorated the International Day of Remembrance for the Victims of the Holocaust.

Moreover, Darfur is in "freefall" or "meltdown," as Chief UN Aid Coordinator Jan Egeland recently put it, going beyond his ominous predictions in conversations with me in September on the occasion of the opening of the UN General Assembly in New York.

More than 450,000 Darfuris have died in this genocide by attrition. The media have been repeating for 20 months now the mantra that 200,000 have died - but the recent evidence of 450,000 dead is comprehensive and compelling. More importantly, this is not a matter of abstract statistics; behind every statistic is a human being with a name, a family, an identity.

There are four million people, as Jan Egeland put it, now on a desperate life support system. Again, the media mantra for some 20 months now has been that two million people have been displaced, ignoring the additional numbers of both displaced persons and those in desperate need of assistance.

These four million Darfuris in desperate need of food and protection are now being joined by one million Chad, and another one million in the Central African Republic. The humanitarian life support system is itself on life support.

There is a dramatic increase in mass atrocity, including systematic rape, indiscriminate bombardment and burning of villages, forced expulsions, and increasing assaults and killings of humanitarian workers.

The Darfur Peace Agreement of May 2006 between Sudan and the main Sudan rebel group is being violated daily and is itself in a "coma," as attested by Jan Pronk, the UN representative in Sudan, while the just brokered Darfur cease-fire has already been violated.

In a word, we know that the genocide by attrition -- or "go slow" genocide as it has sometimes been called -- a description that itself reflects the banality of this radical evil - has moved into high gear.

It is our responsibility, as I first said three years ago as Minister of Justice and Attorney General of Canada at the Stockholm Conference on the Prevention of Genocide - to shatter the silence, to break down the walls of indifference, to sound the alarm, to stand with the people of Darfur. Tragically, I feel like I am hitting the rewind button of that speech three years ago, and have repeated many times since.

But as a result of the "Save Darfur" Coalitions, it is no longer public silence or indifference that is the problem -- it is governmental inaction.

And while words are important, while UN Security Council resolutions are necessary, while the normative adoption by the UN of the Responsibility to Protect doctrine is crucial, words, resolutions and doctrines are not enough. What is so necessary now -- and of the utmost urgency -- is immediate international action to stop the genocide.

What is desperately needed is a Darfur Summit involving the leadership of the African Union (AU), the European Union, the UN, and NATO, that will be convened for the express purpose of putting a Save Darfur action plan into effect -- and will not adjourn until such action plan is adopted.

What follows is a recommended 10-point action plan whereby the international community can exercise the necessary moral, political and diplomatic leadership to save Darfur.

1. The robust UN Peace Keeping Force authorized by the UN Security Council must be deployed as quickly as possible to take over from the underfunded and undermanned AU Mission in Sudan (AMIS). Only this UN Force de Frappe will have the necessary numbers, mandate and resources to stop the genocide.

2. Sudanese president Omar el-Bashir has called the UN peacekeeping force a "colonialist" initiative and "Zionist plot", denies even that any atrocities are occurring, and threatens to withhold his consent for its deployment. But the AU has said it wants the UN force, the UN has authorized the deployment, the evidence of mass atrocities is overwhelming and most importantly, the people of Darfur are demanding that it be deployed immediately.

The resolve of the international community must be clear: to put the UN force on the ground with the consent of the Sudanese government if possible, but without its consent if necessary. Stopping genocide cannot be held hostage to the perpetrators of genocide.

3. The mandate of the AU Mission has now been extended to March 2007. Yet, the plans, announced four months ago, for sending an additional 1,200 troops to join its 7,200 member force - only 40 have arrived - and for broadening its mandate, have yet to be realized. The AU mission has courageously stood as the only line of defense for millions of Darfuris. But it has neither the numbers nor the mandate to stop the killing, and is itself increasingly under attack. Accordingly, until such time as the U.N. peacekeeping force is deployed and operational, the international community must immediately reinforce - and fund - an expanded AU mission, so that it can provide a measure of security to both the Darfuri people and the humanitarian workers seeking to assist them.

4. The UN Security Council demand in 2005 that the Sudanese government cease offensive military flights must now be enforced by the immediate establishment of a "No Fly" zone, supported in particular by France and Germany. The indiscriminate bombing and burning of villages must end.

5. The UN Security Council, the EU, and their individual members must also enforce and enhance the sanctions adopted by the UN Sanctions Committee against the named Sudanese violators.

6. Those Sudanese officials responsible for the perpetration of war crimes, crimes against humanity and genocide must be brought to justice before the International Criminal Court.

7. The Darfur Peace Agreement - which only a robust UN force can enforce - must not be allowed to unravel.

8. Human security is more desperate and humanitarian assistance more urgent than ever. Attacks on NGOs were 100% higher in 2006 than in 2005; attacks against members of the AU peacekeeping force are up by 1000%. There is no humanitarian access at all for the over 60% of people who desperately need it, with the ominous threat of death by starvation and disease. Simply put an enhanced AU mission and robust UN peacekeeping force on the ground is imperative.

9. Individual UN Security Council members must pressure Sudan directly to accept the UN peacekeeping force and end its military offensive. China has particular leverage as the paymaster of Sudan and its largest trading partner. Also, members of the AU and the Arab League have strong relationships with Sudan and can be politically effective in this regard.

10. As the International Crisis Group and Human Rights Watch recently recommended, the UN Security Council, with European support, must move quickly to establish a new UN peacekeeping mission with a strong civilian protection mandate in Chad and the Central African Republic, aimed at deterring the movement of insurgent armed groups across the borders. The NATO-ready rapid deployment force of some 30,000 might be an expeditious way of both augmenting the AU mission and underpinning the UN peacekeeping force.

As the student posters continue to cry out at the Save Darfur rallies: "If not us who, if not now, when"?

The writer is the member of parliament for Mount Royal and former minister of justice and attorney general of Canada. He is the founder of the Save Darfur Parliamentary Coalition.

My Encounter with al-Baghdadi’s Victims

The Golden Rule
Bechukotai 5782: Divine Retribution
Behar 5782: Working to Live or Living to Work?
The Wholeness of Being Broken
Comments
MOST POPULAR IN Society
Our privacy policy