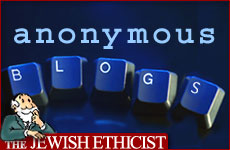 Can I make up a fantasy identity for my blog?

Q: I'm thinking of starting a blog, but I prefer to remain anonymous. Is there anything unethical about an anonymous blog?

A: There is nothing wrong with using a fake identity, as long as the people you talk about also have fake identities. Many bloggers write anonymously and when they write about their workplace or their neighborhood, their coworkers and neighbors are also anonymous -- false names are used, composite characters are created, and so on. In this way no real individual is faced with a situation where he has nowhere to turn to respond to statements made about him.

If you use your real name and talk about real individuals, there is nothing inherently wrong with this but immense care is needed. One obvious concern is saying things that would reflect badly on your friends, or even your enemies. According to secular law a negative statement is libel or slander only if it is false, but according to Torah law derogatory statements are forbidden even if they are true, unless there is some compelling interest in their disclosure and they don't cause disproportionate harm to the subject of the statement.

This prohibition is learned from the verse, "Don't go about as a talebearer among your people" (Leviticus 19:16). However, we see from the verse itself that not only negative speech is implied; the simple sense of the verse seems to speak about a common gossip, who goes about revealing everybody's private affairs, even if they are not necessarily shameful. The Ibn Ezra (and other commentators) connects the word talebearer or gossip (rachil) with the word peddler (rochel): "The wandering peddler buys from this one and sells to that one, and the gossip reveals to this one what he heard from that one."

An innocent friendly blog is okay if these boundaries are kept, but as soon as it becomes anonymous the safeguards against abuse are breached. A person who objects to his mention on the blog is limited in his ability to respond. The most he can do is send a response to the blogger. If the identity is known, there are other possible responses such as a discreet or third party discussion, avoiding the person, etc.

We find an interesting parallel to this idea in the laws of evidence in Jewish law. Testimony given in court is never considered slander; an evident explanation is the strict rules of procedure. Any testimony must be publicly stated in the presence of all litigants, and a right of reply is guaranteed. This corresponds in some ways to a blog in which the author is identified and a right of reply is granted to anyone who feels he has been wronged by a post -- as blogging ethics dictate.

Conversely, Jewish law establishes very strict boundaries on the reliability of hearsay evidence, and one key reason is the lack of a known responsible source for the information. The Talmud tells us that sometimes a rumor is given conditional credibility, pending a thorough legal clarification. (One example is if it is widely reported and assumed that a person is already married, they aren't allowed to get married pending clarification.) However, the passage then gives strict conditions for the kind of "rumor" we credit: "Not a mere passing rumor, but rather where we ask: Where did so-and-so hear? From so-and-so, and him from so-and-so, but since they have traveled away." (1) In other words, we can sometimes give limited credence to hearsay reports, but even this is only when we can trace the exact source of the story. Each link of the chain must have a name and an identity.

Statements that are both anonymous and unsubstantiated are almost by definition gossip.

So any statements that are both anonymous and unsubstantiated are almost by definition gossip. They will never be reliable enough to be believed, and there is no equitable way to refute them. Yet they will be believable enough to cause suspicion and concern. Even if your statements are actually true and constructive, they are still improper because they are unsubstantiated. The authoritative work on forbidden speech, Chafetz Chaim, states that even these statements are forbidden if they are not believed, because they are perceived by the listener (or reader) as slander. (2)

The blog world provides a very important forum for discussion of important topics. Even when controversial statements are made, when they are made with full responsibility and identification there are generally good safeguards to ensure that a fair defense can be mounted. Of course there is still a danger that once information is revealed it can't be concealed, but at least when a person bears personal responsibility for his statements there is some degree of reluctance to reveal private information.

Likewise, even the unpleasant side of our everyday existence can sometimes have important public interest, but this can be achieved in an imaginary neighborhood or workplace with a reasonable but not identifiable resemblance to your own.

However, the ethical line is drawn when a blogger hides behind an anonymous identity is used to disperse irresponsible and unsubstantiated statements about real people. 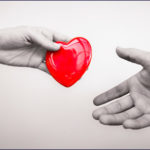 You Give, You Will Care3 min read