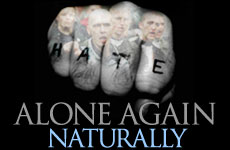 My brush with anti-Semitism.

"Pardon me, I seem to have run out of tissues. Can I please get some more?"

Larry was just one of 160 of us who journeyed to Eastern Europe for nine days this past August. It was Day Two and the group was gathered in the Conti Hotel in the city of Vilnius in Lithuania -- home of the sainted Vilna Gaon and other prominent Rabbis of yesteryear.

Larry stood politely at the front desk awaiting the box. It never came.

"There are no more tissues."

"You mean, there are no more tissues left in the whole hotel?" Larry asked, taken aback.

"There are no more tissues," was the robotic reply.

"Let me speak to the manager," said Larry.

"Is it possible for me to get some more tissues? We seem to have run out of them in my room.

"Which floor are you on?" she asked.

"There are no more tissues for the 5th floor," she answered and walked away.

Larry stood there, puzzled. Was there something about the 5th floor that warranted punitive action? Is it possible that the hotel had actually run out of tissues? Was there some magic word that Larry was missing in his request?

The painful answer to all of these questions is an obvious no. Corroboration came early the next morning when Devora was hovering around a basket of apples at the far end of the lobby.

"Those apples are not for you," bellowed the uniformed staff person.

"Pardon me," said Devora, "I'm a guest here in the hotel. I believe we are entitled to a continental breakfast."

I don't think I've ever met a 'Jewish' apple, but I know a rotten one when I see one.

"No. If you want apples you can go into that room over there (pointing to our dining area). There you will find the Jewish apples."

The 'Jewish' apples, you know, were not wearing yarmulkes; nor did we find any that happened to be in the shape of a Menorah or a Shofar. I don't think I've ever met a 'Jewish' apple, but I know a rotten one when I see one.

The disdain and the contempt in the eyes of these Lithuanians were palpable, but they also served to punctuate the authenticity of the full Eastern European experience that we had come to discover and to lament. It was a reality that I had read about, heard about, and fought hard to deny and dismiss. But now it was staring us in the face.

Many similarly ugly confrontations took place in the days following. Some were subtle -- shopkeepers who suddenly "ran out" of Diet Coke, and some were blatant -- swastikas graffitied on garbage cans, 'Judenrein' etched into old cardboard placards.

I watched as my fellow travelers and I attempted to assimilate these experiences into our ever so complacent Western psyches. Like a small innocent child who witnesses violence, injustice, or bias for the first time, we saw our comfy American liberal bubbles burst before our eyes. There was no officer to complain to, no form to fill out, and no affidavit to file. They hated us for reasons they wouldn't be able to explain and we fell victim to the time-honored tradition our ancestors eternally encountered and suffered from.

Probably the most frightening moments of our trip took place just a couple of days after we left Vilnius. After enduring a five hour plus passport check at the Belarus border (just "routine," of course), we arrived, haggard and worn out, at our destination -- the holy city of Volozhin. The time was 11:30 p.m. It was here that the Mother of all Yeshivas -- the citadel of Torah that blossomed from the vision of the great Reb Chaim Volozhiner -- had been realized.

The holy edifice, now standing over 200 years, perched before us, as we descended from the buses and strode in the darkness en route to the building. This house of God had lain abandoned since 1892, but in its 86 years of operation it had borne Torah giants of unprecedented scholarship and a legacy of impeccable repute.

A spirit of rejuvenation spread through the group, until we took notice that we were not alone. Outside the still proud structure, a gathering of local hooligans had assembled. Over 100 neighborhood toughs, many of them inebriated, stood and stared as 'the Jews' made their way to the ancient schoolhouse. The Jews were back!

The rejuvenation quickly transformed into dread and fright.

The rejuvenation quickly transformed into dread and fright. One of the thugs shouted something largely unintelligible that scared the wits out of many in the group. Someone else threw a bottle at no one in particular, but the crash of shattered glass in the dark was enough to pummel terror into the bravest among us. We shuffled hurriedly into the building, trying hard to pretend that we were unafraid by the looming threat before us.

Many admitted later that they had conjured up the most horrific scenarios possible, borrowed from terrifying Holocaust testimonies and movies. One woman was certain that a full scale riot would ensue and we'd have to run for our lives.

In fact, we left the scene, thank God, without further incident. Besides being subjected to a vulgar "mooning" exercise by a dozen or so of the more intelligent rowdies among them, we felt fortunate to have survived the truncated visit.

The anti-Semitism we confronted, stinging and startling as it was, somehow did not dominate our nine-day excursion into the past. Our journeys to the holy cities of Mir, Telshe, Vilna, Kelm, Ponovezh, Slabodka, Kovno, Radin, and Volozhin, as well as the horrors of Auschwitz and Majdanek, left us with incredible inspiration and resolve to learn more, teach more, and do more with our talents and our uncommon identity.

I returned to the friendly confines of Brooklyn and hugged my kids extra hard. I uttered a silent prayer that they be spared the anguish and torment of anti-Semitism.

But how realistic is that petition? Does our tortured past not demonstrate clearly that the hatred that we always endured is all but inevitable? Can we seriously pretend that history does not necessarily have to repeat itself? Have our Sages not stated and taught us that the incessant enmity toward the Jewish People, inaugurated by Esau's malevolence for Jacob, will always be a part of our existence on this world?

We prefer to deny our invariable destiny. We make believe that the exception might actually become the rule -- that hatred's temporary lull in benevolent lands might somehow alter the natural order of history's most storied venom. But the fact is that anti-Semitism does, and always will, haunt and oppress our daily lives -- wherever we are and no matter what we do.

Painful as it may be, we all need to reflect on the wrenching reality of this fearful fate. Pogroms, persecutions, and threats of extermination seem always to be present or looming ahead. When we are pushed against the wall, even our best friends seem nowhere to be found -- or arrive too late with too little. Dictators and madmen proclaim, without shame, their full intention to "wipe us off the face of the Earth," or "drive us into the Mediterranean Sea." And no one bats an eyelash or dares to care. The laughable U.N. seems to exist for the sole purpose of serving as a permanent, unimpeachable record of the hatred of the nations for the Jews. Israel, as always, stands alone.

And being alone is never easy -- not as individual, not as a group, and certainly not as a People. But we might as well get used to it because it is not likely to change. Complaining about our destiny, waiting for unquestionable support, or expecting anything different only increases our frustration and intensifies our anguish.

But the day will certainly come when the Jewish People will reach their full potential, the entire world will recognize and appreciate the reality of God, and peace will reign.

That is God's unshakeable promise.

Hanukkah and the Secret to Jewish Survival
Near Death Experience Panel
The Western Wall: The Heart of the World
Ask the Right Question: Tisha B’Av
Comments
MOST POPULAR IN Israel
Our privacy policy
Aish.com Is Looking for Great Writers