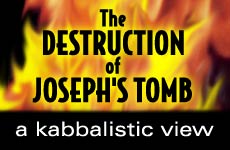 Shechem -- where Joseph was sold into slavery and later buried -- is where redemption will begin with acts of destruction.

How fitting it is that a rioting Arab mob destroyed Joseph’s Tomb after all these millennia.

I am devastated by the loss of such a holy site, but I am also awed by the timing of the event.

Because this is Joseph's millennium.

According to the Talmud, there are six millennia to world history as we know it (Sanhedrin 97a); in the Kabbalistic understanding there is a correspondence between each millennium and the functioning of the world according to different spiritual forces.

Just like the concept of physical DNA, so too, is there cosmic DNA.

Just like there is a concept of physical DNA, so too, is there a concept of cosmic DNA, spiritual realities called sefirot which possess the potential for all that history can and will ever produce. They act as spiritual transformers, spiritual filters for the awesome and sublime light of God, resulting in the manifestation of different traits that form the basis of all creation and mankind.

All together, there are ten such sefirot, filters or traits, which represent the spiritual "chain of command" between God and the world in which we live. Six of them have governed history since creation, and each one is associated with a specific Torah personality who exemplified this trait, as follows:

We are now in the year 5761 (from creation), therefore we are also in the sixth millennium, the one that is spiritually "powered" by the sefirah called yesod – the one that corresponds to Joseph.

The Torah tells us that, just before Jacob died, he gave Joseph an extra piece of Israel – the city of Shechem.

The Torah tells us that, just before Jacob died, he gave Joseph an extra piece of Israel – the city of Shechem (Genesis 48:22). It was in Shechem that Joseph's brothers sold him down into slavery, and, it was to Shechem that the bones of Joseph were brought from Egypt hundreds of years later for their final burial.

It was here in Shechem – called Nablus by the Arabs – that the yeshivah stood, until two weeks ago, when it was viciously destroyed.

Regarding the territory of Joseph, the Zohar, the chief work of the Kabbalah, has this to say:

In the time of the resurrection of the dead, many camps will arise in Land of the Galil, because that is where the Messiah is going to be first revealed, since it is part of Joseph's territory. It will be the first place to be destroyed. It will begin there ahead of all other places, and then spread to the nations. (Zohar, Vayakhel 220a)

Shechem, according to the Talmud, is a place where bad things happen (Sanhedrin 102a.) It is a place "set aside for punishment," and at this time, this prophecy has come true. Arabs have ruthlessly murdered heroic Jews – Jews who were self-sacrificing for the sake of Torah, for the sake of Israel, and for the sake of Jewish history – and pillaged and destroyed the yeshivah, and burned many holy books.

And now, with the Israeli withdrawal from the site, in the minds of Arabs and Jews alike, Shechem represents a weak point in the Israeli chain of command.

But it need not be so.

It is pointed out in the Kabbalah – where so many secrets about Messianic times are revealed – that the first letters of each of the words Baruch Shem kevod malchuto l'olam va'ed, spell the words, b'Shechem lamed-vav, meaning "in Shechem, thirty-six."

Baruch Shem is the second verse of the Shema said twice a day. According to tradition, it represents our belief that God orchestrates the events of history, even when this fact is veiled by nature and "natural" cause-and-effect. This verse alludes to the day when God will stop working undercover and reveal himself to humanity in an obvious manner. In other words, it is a verse that alludes to the final redemption.

But, why "in Shechem thirty-six?" And "thirty-six" what? That's a question that opens up a Kabbalistic "pandora's box," for thirty-six is all about exile AND redemption.

The original primordial light of creation shone for 36 hours before God hid it.

There are many phrases that have the same gematria or numerical value and they all point in the direction of one answer: the original primordial light of creation, which, the Talmud (Brochos 8:5) says shone for thirty-six hours before God hid it for the righteous people of history. This light is redemption; when it shines, evil is banished.

This is why Moses was born with it, and exemplified it, and was even compared to it. He was also born in the Hebrew year 2368, thirty-six years after Egyptian servitude officially began following the death of the last of Joseph's brothers, Levi.

This light is called Ohr HaTikun – the "Light of Rectification." It shone for Adam on day six of creation; it shone again at Mount Sinai when the Torah was given; and, with the help of God, it is going to shine again, soon – permanently – for the generation of Messiah.

As we mentioned earlier, Ten Sefirot represent a "chain of command" between God and the world as we know it. Each of those Ten Sefirot are also meant to have a sub-set of Ten Sefirot of their own, but, during times of exile, we only have six. Six times six, of course, is thirty-six, and, it represents our potential to fulfill the purpose of creation.

This challenge is actually alluded to in one of God's own name, Elohim. Kabbalah teaches that this name is really made up of two parts: the first three letters add up to a numerical value or gematria of thirty-six, corresponding to the six sefirot we have examined; the last two letter have numerical value or gematria of fifty, representing one of the top three sefirot – binah, which is associated with "fifty gates of understanding."

What does all this mean?

If we, the Jewish people, act as if God and Torah are all that counts, then, the light of binah is drawn down and becomes attached to the lower six sefirot, and, this, in turn, elevates these six sefirot upward towards binah. The result is redemption.

This is actually what we were trying accomplish at the end of the Yom Kippur service, when we say the Shema once, Baruch Shem kevod three times, and Hashem et Elohim seven times – one time for each level of heaven that, in exile, stands between us and the Divine Presence.

When falsehood rules the minds of men, this is a signs that the Messiah is near.

If, on the other hand, we act inconsistently with our belief in God, paying only lip service to His desire for creation and us within it, then, binah is drawn upward, the six sefirot downward, and falsehood and exile overrun creation.

The Talmud (Sanhedrin 97a) says that, when falsehood rules the minds of men, this is actually one of the signs that Messiah is not too far away.

Judging by the reporting of the Israeli-Arab conflict by many prominent newspapers, we have entered that era.

Even the name Shechem itself symbolizes this idea. The first and last letter are separated from each other by the letter kaf which symbolizes intellectual blindness. However, when kaf is removed, and these two letters are allowed to unite, then they spell the word shem, "name," a euphemism for the Tetragrammaton, God's holy ineffable name – Ha-shem, "the Name."

Yes, Shechem is a place set aside for punishment. However, that is only up until the time for redemption, and, when that time comes, then, the hidden light of creation will be unleashed, a light clearly associated with Joseph, and it will cause great miracles. Miracles that will clearly reveal the hand of God in history, and cause God's name to be unified, with or without our efforts.

So, how fitting it is at this late stage of history, while the Jewish people seem to be grappling for ground on so many fronts, that Joseph’s Tomb was decimated. I hope it is a good sign, for they know not upon which holy ground they tread, nor what powers of redemption they have unleashed.

A year of miracles and peaceful redemption for all the Jewish people!

Hanukkah: Seeing Beyond the Surface

Kindling the Lights of Wisdom