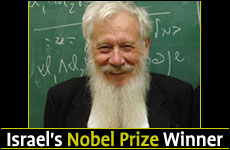 When he receives his Nobel Prize for Economic Sciences this week, Prof. Robert Aumann will talk about bringing world peace.

Bringing peace to the world is usually the preserve of political or religious ideologues - certainly well outside the domain of mathematicians. But this is the theme of the lecture that Prof. Robert J. Aumann of the Hebrew University of Jerusalem will deliver next week when he receives his Nobel Prize for Economic Sciences in Stockholm.

In October, the Royal Swedish Academy of Sciences jointly awarded Aumann and Prof. Thomas C. Schelling of the University of Maryland the prize "for having enhanced our understanding of conflict and cooperation through game-theory analysis."

Speaking at a Jerusalem press conference at the university's Center for Rationality on the eve of his departure to the Stockholm ceremony on December 10th, Aumann explained that resolving specific conflicts -- whether in the Balkans, the Middle East, Africa, Asia -- does not bring peace to the world. To accomplish this, he maintained, what is required is an interdisciplinary analysis -- historical, psychological, sociological -- into the very nature of war.

War must be studied "like you study illnesses, like you study cancer. Once you understand the causes of it you can begin to try to cure it," he said.

It's a mistake to say that war is irrational.

According to Aumann, it's a mistake to say that war is irrational. There are "rational motives" he explained, that have driven us to war since the dawn of civilization. And it is through investigating the rational nature of war, that we can then be able to address the problems by applying game theory -- Aumann's speciality.

Game theory provides a complex mathematical analysis of elements and strategies, which are involved in decision-making situations, including those concerning conflict and cooperation. Despite the difficult nature of the mathematics of game theory, Aumann explained to ISRAEL21c that the theory is actually something which we all, at a basic level, experience in our daily lives.

"I do it all the time," he said with a shining broad grin emerging above a long carefully displayed white beard. "When I want information from someone official, I always ask their name. I usually forget it immediately -- but I want the person to feel responsible for what he's doing."

The German-born Aumann has been a central figure in the development of game theory for about 50 years. He has been able to apply his outstanding ability as a pure mathematician in a field which concerns itself with real-life problems of conflict and co-operation.

In 1955 he completed his doctorate at the Massachusetts Institute of Technology (MIT) on the mathematically esoteric subject of knots -- a subject that, much to Aumann's surprise, has now become of interest to scientists studying the way DNA gets tangled in a cell, sometimes leading to cancer.

It was at MIT he met John Nash (the subject of the 2001 film A Beautiful Mind) and the two discussed the newly emerging field of game theory.

Aumann then joined a small group at the Forrestal Research Center, attached to Princeton University. Here he was to meet a problem that, because of his earlier discussions with Nash, he realized could be solved with game theory. The problem was of strategic importance, concerning a squadron of aircraft, a few of which were armed with nuclear weapons. Aumann began work on game theory.

In 1956 Aumann moved to Israel; his second emigration -- having moved from Germany to the US with his family in 1938. Throughout his life in Israel he has continued to maintain close collaboration with mathematicians and economists in the US. Most recently he was a Visiting Scholar at the Cowles Foundation for Research in Economics at Yale University (1989); Oskar Morgenstern Visiting Professor of Economics, New York University (1997); Nemmers Professor of Economics, Northwestern University (1999-2000). He has been a member of the US National Academy of Sciences since 1985.

Despite the accolades for his outstanding achievements, Aumann, a devoutly observant Jew, remains a quiet, unassuming figure.

In 1991 Aumann helped found the Center for Rationality at the Hebrew University -- a academic venture in which he is still a leading light. Here outstanding scholars from 13 different university departments meet every other Friday.

Despite the accolades for his outstanding achievements, the 75 year-old Aumann, a devoutly observant Jew, remains a quiet, unassuming figure -- most excited to tell the press gathered around him of his plans to bring his entire immediate family of 35 people -- his children, their spouses, plus grandchildren and great-grandchildren to Stockholm, in addition to other relatives and members of his 'scientific family.'

As he is asked questions ranging from, the logistics of taking his family entourage, to more thought-provoking issues, his face flashes between reflective moments of deep still thought and radiant smiles and laughter. Despite the constraints on his time since winning the Nobel, Aumann has attempted to retain equilibrium in his life, and proudly announces that he hasn't had to cancel any of the classes he teaches or any meetings with students.

If there is hope for ever understanding the causes of man's seemingly unending ruthless struggle against his fellow man, the chances are great that it would emerge here -- in the Center for Rationality, under the guiding influence of the deep humanity, piercing intellect, beguiling wit and mathematical genius of its founder: Professor Robert J. Aumann.

Breaking My Silence: An Arab Christian Speaks Out

Slouching Toward Narcissism
The Jewish History of Prague
Why the Sexual Revolution was Bad for Women
The Princess: Sukkot
Comments
MOST POPULAR IN Israel
Our privacy policy
Aish.com Is Looking for Great Writers