Ethics of the Fathers, 3:8 In Praise of Servitude 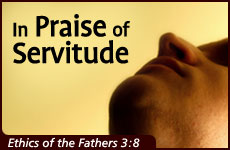 Who is greater: the servant of the king or the king of servants?

Rabbi Elazar of Bartosa said,: Give Him from His own, for you and all that is yours are His. And so, regarding King David, the verse states, "For everything is from You, and from Your hands have we given to You" (I Chronicles 29:14).

The sages teach a parable about young man who returned from a long voyage abroad to discover that his father had fallen ill and died in his absence. Even worse, the father had left his entire fortune not to his own son but to his slave, with instructions that the son, when he returned, should be allowed to choose but a single item from the father's estate to keep for himself.

Initially confused and resentful that his father had left behind such a will, the young man gradually worked out the only possible explanation for his father's instructions. Uncertain when his son would return, and mistrustful of the servant who would be left overseeing his affairs, the father had worried that his estate might be left irresponsibly managed or subject to pilfering and embezzlement. Faced with the dilemma of how to ensure that an otherwise untrustworthy servant might responsibly oversee the welfare of the son's inheritance, the father had found himself with only one course of action.

"I choose as my inheritance," the young man said before the Jewish court, "my father's slave, for everything a slave possesses belongs to his master."

The son recognized what the slave had not: by leaving everything to the slave, the father had guaranteed that the slave would tend his estate well; by allowing the son to choose one possession, he provided the means for his son to reclaim everything else.

Jewish tradition and Jewish law define servitude, or slavery, as an institution vastly different from the enslavement of African peoples in the shameful history of Western Civilization. The Torah requires a slave-owner to treat his slaves with respect, to provide for their basic needs, to refrain from overworking them, and to set them free if he mistreats them. In the ancient non-Jewish world, where abject poverty and capricious violence imposed themselves on all but the most privileged, the opportunity to sell oneself or one's children into the relative comfort and security of Jewish servitude would have appeared to many the most attractive of all possible alternatives.

By acquiring a master, however, the servant not only freed himself from the responsibility of providing for himself and his family, but simultaneously relinquished the privileges of self-responsibility. Just as it became his master's obligation to provide for the servant's needs, so too was it the servant's obligation to dedicate all of his productive resources to his master. Consequently, his time, his energy, and anything of value that he might come to possess automatically became the property of his master.

SERVANT OF GOD -- THE HIGHEST PRAISE

Only ten individuals in the Bible earned the privilege of having God address them with the Hebrew appellation avdi -- "My servant." Abraham, Jacob, Moses, and David are counted among that illustrious group of individuals so righteous that they sublimated every aspect of their own egos and committed every facet of their being to the service of their Creator.

Like the slave whose property belongs to his master, the true servant of God sees his every resource not as his own, but on loan from the Almighty. Why did God give me eyes, he asks himself, if not to perceive the glory of creation and recognize the Divine Will? Why did He give me lips if not to elevate my speech through prayer, Torah study, and refraining from gossip? Why did He give me hands if not to involve myself in acts of kindness and holiness? Why did He give me time and energy and money if not to commit myself to bettering myself and my community through charitable deeds?

Because we human beings possess the frailties and shortcomings of flesh and blood, not every servant bears his service willingly. The attraction of autonomy, the illusion of independence, the seduction of pleasure and power -- all these whisper to us to abandon the higher purpose of the soul and the spirit to assert ourselves in the arena of the mundane. And so the sages teach us: Better a tail to lions than a head to foxes: better to devote oneself as a servant to the greatest of masters than to set oneself up as a mere master of servants; better to prepare one's soul for eternity than sell it for fleeting temporal gratification.

Give Him from His own, proclaims Rabbi Elazar, echoing King David, for you and all that is yours belong to Him. Forgo the ego-indulgence of aspiring to mastery over the world and aspire to something infinitely greater, indenturing yourself in the service of the King who reigns over kings.

There is no greater service. There is no higher calling. And there is no more precious reward.

You Can Love Anyone

The Most Crucial Part of This Election

Principles of the Soul: #3 - Giving Vs. Taking

If You Could be Superman
Big OnThe Little Things
Chraime Egg Boil
Is Grease the Word?
Comments