How To Work Miracles - The God Factor: Part 2 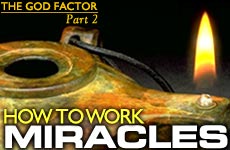 The distinction between the natural and the miraculous is only one of human perception. Everything that occurs is really a miracle.

On the third day of Chanukah, 1997, nineteen-year-old Israeli soldier Menachem L. and his buddy Donny were stationed at a military outpost in the northernmost tip of the Lebanese Security Zone. Menachem, a religious Jew, was carrying in the pocket of his battle vest a laminated card. His father had typed out in Hebrew part of a verse from the Torah: "Hashem is God; there is nothing besides Him."(Deut. 4:35) He gave his son the quote when Menachem went off to war, with the admonition to say the verse whenever his life was in danger.

Suddenly Menachem saw an anti-tank missile hurtling directly toward him.

Now Menachem and Donny were being shot at by Hizbullah terrorists positioned on a nearby mountain above them. Suddenly Menachem saw an anti-tank missile hurtling directly toward him. Such missiles are two meters long and carry about six kilos of warhead, sufficient to easily penetrate a tank -- or the concrete outpost where Menachem was standing.

Menachem thought, "For sure I'm dead." He quickly recited the verse, "Hashem is God; there is nothing besides Him," thinking, "Whatever God wants will happen. If He doesn't want it to happen, it won't."

Suddenly, a few meters in front of Menachem, the missile changed direction in midair, as if it had struck an invisible force field. In full view of Menachem and eight other soldiers stationed on adjoining hilltops, the missile veered upwards, against gravity, and flew 20 meters straight up, then made an arc over Menachem's head and landed behind his outpost.

The force of the explosion knocked Menachem and Donny off their feet, but the only injuries they sustained were some shrapnel in the back of their knees.

When the battle was over, the platoon held a debriefing. The eight soldiers, including a few top officers, who had witnessed the missile's astonishing trajectory were at a loss to explain what had happened. In their entire military careers, they had never seen a missile behave like this. Their unanimous appraisal was that it was... a miracle.

What happened? How could a missile, upon the recitation of a Torah verse, blatantly violate the laws of physics, aerodynamics, and gravity?

In order to forestall a run on laminated cards printed with this particular verse, it's vital to emphasize that Judaism decries magic, Menachem L. is not Harry Potter, and this verse is not a magical incantation.

We must delve deeper into Judaism's understanding of miracles.

On the surface, it appears that there are two kinds of miracles. Some events, such as we discussed in Part One hyperlink (the victory of the Maccabees or a 45-year-old woman getting pregnant with I.V.F. using one egg) are exceedingly unlikely, but still possible according to the laws of nature. Other events, such as a missile changing its trajectory in midair or the famous Chanukah miracle of a cruse of oil sufficient for one day burning for eight days, are simply impossible according to the natural order.

Thus, to understand miracles, we must define "the natural order." Many people understand "the natural order" as the laws of cause and effect, such as gravity and electromagnetism, which God set up at the creation of the universe. These laws operate consistently except when God chooses to make an exception, which is called "a miracle."

God wills reality into existence at every millisecond.

According to Judaism, this view is a total misunderstanding of the way the world operates. In truth, God wills reality into existence at every millisecond. No other force -- not nature, not gravity, not physics -- has any causal power at all. That's what Menachem's verse means: "Hashem is Elokim (usually translated as ‘God,' but also meaning ‘powers'); there is nothing besides Him."

As Rabbi Eliyahu Dessler, a great sage of the mid-20th century, wrote: "The truth is that there is no essential difference between the natural and the miraculous. Everything that occurs is a miracle. The world has no other cause but the will of Hashem."

Thus, the distinction between the natural and the miraculous is only one of human perception. Again from Rabbi Dessler: "We call God's act a ‘miracle' when He wills an occurrence which is novel and unfamiliar to us and which consequently makes us aware of the hand of God. We call God's acts ‘nature' when He wills that certain events should occur in a recognizable pattern with which we become familiar."

According to Rabbi Dessler, nature is an illusion which God created in order to give human beings free choice to recognize God or not. Once a human being has risen above the illusion of nature as an independent power, he is no longer constrained by "the laws of nature."

The Talmud relates a story about Rabbi Chanina ben Dosa. One week, when it was time to light the Shabbat lamp, his daughter realized, to her horror, that she had accidentally filled the lamp with vinegar instead of oil. Rabbi Chanina told her to light the lamp anyway, saying, "He who told oil to burn can tell vinegar to burn." The vinegar proceeded to burn the entire Shabbat.

In other words, oil does not burn because it has combustible properties. Oil burns because God wills it to burn. Because an environment of chaos would not be optimal for human beings to live and make choices, God wills things to operate with a high degree of consistency. Thus, when you light oil, you can expect it to burn. But God could just as well will vinegar to burn, because nature has no independent reality.

THE IDOLATRY OF NATURE

We modern sophisticates tend to snicker when we read the Chanukah story of how the zealous priest Mattathias refused to bow down to a Greek idol, and thus launched his famous rebellion. Who but a primitive would engage in idolatry?

The ancient Greeks, who were advanced in science and philosophy, were not a religious people. While they paid lip service to their gods, their intellectual elite, such as Socrates and Plato, were atheists. The god they really adulated was nature.

The idolatry of our modern world -- more than money or rock stars -- is nature.

That's why the first prohibition they enforced on the Jews was forbidding circumcision. They believed that nature, and thus the human body, was perfect; circumcision, according to the Greek view, was mutilation. Many Jews of that era bought into the Greek idea and had their circumcisions surgically reversed.

Idolatry is believing in the ultimate power of any force "besides" God. The idolatry of our modern world -- more than money or rock stars -- is nature.

This explains the many books and articles written by leading biologists, biochemists, and physicists who wax almost poetic about the incredible intricacy they have discovered in their fields of study -- the uncanny congruence of elements and factors without which birds could not fly nor subatomic particles oscillate, and then conclude their paean with some version of: "Isn't nature amazing!"

Only idolatrous devotion could keep such brilliant minds from acknowledging the irrationality of crediting the blind force of nature with such teleological precision.

Judaism asserts, in the words of Rabbi Dessler: "Nature has no objective existence." Or as the Torah puts it: "Hashem is God; there is nothing besides Him."

God factor is the only factor.

In Part One, we showed how expert predictions which fail to take into account the God factor cannot be accurate. We were looking at God's will as one factor among many. Now it turns out that the God factor is the only factor. Despite the illusion of multiple forces, the truth of existence is "There is nothing besides Him."

Now we can understand why the mitzvah of Chanukah is to kindle eight lights, rather than seven. After all, the Maccabees found one cruse of oil sufficient to burn naturally for one day, so the miracle was of seven days' duration, not eight.

Our sages answer that even the burning of the oil on the first day was a miracle, for that oil burns at all is not a given of nature, but a miracle of God.

Now we can also understand how a 19-year-old soldier on a hilltop in Lebanon could work a miracle that saved his life. It was not the words of the verse which magically deflected the missile. Rather, the words of the verse, "Hashem is God; there is nothing besides Him," reminded Menachem of the truth which had been inculcated into him by his religious upbringing. As soon as Menachem thought, "Whatever God wants will happen. If He doesn't want it to happen, it won't," he acknowledged that the missile has no existence independent of God. This recognition disempowered the deadly missile that was hurtling towards him. Menachem understood that the same God who makes missiles fly straight can make missiles do porpoise leaps in midair. So God did just that for Menachem.

When the debriefing was over, Menachem went back to his outpost and lit his Chanukah candles.

A Response to Recent Tragedies: 8 Questions for 8 Nights
What Happened to the Truth?
The Japanese Everything Bagel Spice Recipe
How To Stock A Jewish Pantry Wherever You Live
Comments
MOST POPULAR IN Israel
Our privacy policy