A cosmic conspiracy to get one man to keep kosher.

For some Jews, keeping kosher is an integral part of their spiritual connection. For me, it just seemed plain weird. I always thought that it would take nothing short of a miracle to convince me it was a viable option. But life sure does have its surprises...

A few years ago, my wife and I moved from Johannesburg to Los Angeles to further our careers in film and television. At the same time, we decided to learn more about our Jewish roots. We found the ideas and philosophy amazingly powerful.

But liking the concepts is a lot different than living them -- that usually involves some kind of change in one's life -- and who likes to change?

The advice we got from everyone was to start out slowly. Pick a mitzvah you're comfortable with and then grow gradually.

I decided I'd work on "do not murder" for a year or two, and then take it from there.

Great idea. I decided I'd work on "do not murder" for a year or two, and then take it from there.

But my wife, Genevieve, had other ideas. She was already talking about koshering the kitchen.

"Are you nuts!?" I shrieked. "What will we eat? We'll starve to death!" I tried to appeal to her sense of reason.

But Genevieve is a woman of action. She pulled me into the kitchen and proceeded to pluck cans and bottles off the shelf. To my chagrin, every single item of food in our possession already had a hecksher, a kosher symbol. Even my favorite ice cream. We had been practically keeping kosher for months, and I didn't even know it!

I had to concede defeat. Next thing I knew, we had a rabbi in our kitchen blow-torching our oven -- kosherizing it, as we called it.

Truth is keeping a kosher kitchen wasn't even that hard. In fact, I kind of liked it. The real challenge came next: What will I eat at work?

Since I'm always on the move -- on location or in a studio -- eating is the least of my concerns. The idea of food becoming a priority in my life was, let's just say, less than appetizing.

Fortunately, I had time. After all, we were "in transition." So whenever I had a say in it, I'd opt to eat at one of the many kosher restaurants around town. But if there weren't any nearby, or if it was really impossible -- I'd eat in a non-kosher restaurant, being careful about what I ate.

If God wants me to go fully kosher, He's going to have to let me know Himself.

I was happy to hover "in transition" mode forever -- the best of both worlds. Genevieve, however, was leaning towards making more of a commitment. "If God wants me to go 'fully kosher,'" I said half joking, half serious, "He's going to have to let me know Himself."

A short time later, two new kosher restaurants opened up right around the corner. I felt an unnerving, cosmic wink.

But that was nothing compared to what came later.

Around the time I was having my strongest existential kosher crisis, a former client called and invited me back to my native South Africa to produce his launch. "You see?" I goaded Genevieve, "How would we keep kosher in Johannesburg? It's just as well we're not ‘fully kosher,' or we'd be in trouble."

I set up the production office in my client's building, and didn't give the kosher issue another thought -- which was fortunate, since his office served fully catered meals that were naturally not kosher.

Turns out my client's brother-in-law just happened to own a kosher business that was branching out into catering at that time. This was his first account. So I ate fully catered kosher meals every day."Maybe Somebody's trying to tell you something?" Genevieve teased.

I couldn't be sure. But the weirdness didn't stop there. Suddenly, all of Johannesburg seemed to be going kosher! Three new kosher restaurants had just opened up around the city -- and, to my astonishment -- even the studio I edited at had a kosher canteen. I couldn't believe it! An American film crew, with Jewish producers, ‘just happened' to be in post-production at the time, and they insisted on kosher food.

What was the world coming to?

Even our parents were supportive -- they koshered their kitchens for us. But I still managed to convince myself keeping kosher wasn't a viable option. It was going to take a lot more than a few little coincidences to turn around a hardened cynic like myself.

I wanted to get back to LA., back to the way things were -- where I could bury my head comfortably in the sand.

But there were other plans in store for me...

My younger brother, Allan, came to spend some time with us. He had some business to attend to in San Francisco, so we planned to drive up the coast together.

Throughout my "Jewish Journey," Allan has always been my reality check -- constantly quizzing me, pushing me, making sure my feet were planted firmly on the ground. Despite his own deep love for Judaism, he made it his personal mission to make sure we didn't go "too far."

My brother thought I was nuts.

From the moment he got to LA, he was on the offensive, probing and questioning my motivations. I did my best to explain the serendipitous providence I had been experiencing, the practical and spiritual benefits of keeping kosher, and I guess, well -- he thought I was nuts.

He challenged me for hours on end -- and all the way to San Francisco. I just couldn't seem to find the answers that would satisfy him.

By the time we got there, my head was spinning. I wasn't sure if I'd convinced him I was on the right track -- or if he'd convinced me I was, perhaps, a little overboard.

I knew the kosher thing in San Francisco was going to be tough, so I planned ahead. I armed myself with a list of the local kosher restaurants printed off the Internet.

We checked into our room, and promptly set out to explore the city. Since my brother is a take-charge kind of guy, I let him lead the way -- up this street, down the next. I followed as he hopped onto a passing streetcar, and off at some random point.

Finally we ended up in China Town. Perusing the stores and restaurants, I realized I was really hungry, and I was sure Al was too. I reached for my handy kosher restaurant guide but it wasn't there! I inadvertently left it in the room, miles away.

It would take at least twenty minutes to call around and find the closest kosher joint -- and a whole schlep halfway across town to get there. Surrounded by a thousand restaurants, it all seemed so absurd and I knew Al wasn't going to be impressed.

Things were about to get ugly.

"Is this really all worth it?" I wondered to myself. "Does God really care what I stick in my mouth? Maybe it's time for me to be a little realistic and forget the whole thing."

Just then, Al turned to me and asked, "So where are we going to eat?" I could tell he really meant "when."

I panicked. My eyes darted around, frantically searching for an Internet café. It was hopeless. I didn't want to get into another confrontation with my brother.

I was about to give in, when another voice inside me yelled, "You WIMP! You gonna give up that easily!?! Stand up for what you believe, man!"

That was it. I just had to do the right thing. 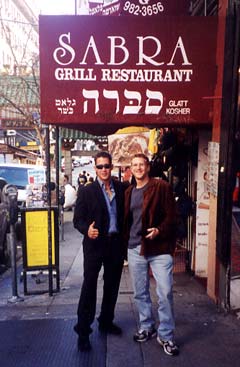 I was about to tell him to brace himself for a 45-minute delay, when out of the corner of my eye I noticed something strangely out of place -- Hebrew writing. I looked again closely and spelled out the words, "G-l-i-t K-u-sh-a...No, Gl-ett...? Glatt Kosher!"

Right there, smack in the middle of China Town -- a kosher restaurant!

I couldn't believe it.

And neither could Al.

There were no more questions left to ask. My most ardent challenger had unwittingly led me through the streets of San Francisco -- only to find the answers we both were looking for.

From then on, keeping kosher was no longer an issue for me.

Maybe what happened to me isn't exactly typical. But I believe that in everyone's experiences, the essence is still the same: When you set out to do the right thing, the Universe conspires to make it just a little bit easier.

Wayne Kopping is an award-winning filmmaker.

The Gift of Light

Shavuot and the Grateful Dead
What Makes Eli Run?
The Tyranny of Materialism
Science Enters the Mysterious Inner World of Consciousness
Comments
MOST POPULAR IN Spirituality
Our privacy policy