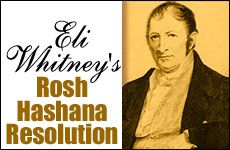 This Rosh Hashanah make sure your resolutions are S.M.A.R.T.

As Rosh Hashana rapidly approaches, we want to make resolutions that will help us change our lives for the better so that we don't make the coming year a repeat of this past year.

We can learn some important lessons about implementing change from Eli Whitney, a man who changed America and the entire world, more dramatically than Henry Ford or Alexander Graham Bell. A man who also made some fatal errors, ones that would cost him dearly.

Eli Whitney, a real Yankee from Massachusetts, graduated from Yale University in 1792, and moved south to fill a tutoring position which was supposed to assist him in paying off his college loans (some things never change). When he arrived, he found the employers would only pay half of what they had promised (again, some things never change). He left, and went looking for other work. He was invited to stay a week at a plantation outside of Savannah, while he went job-hunting.

At the plantation, he noticed a problem with Upland Cotton, the species commonly grown in the South. It had seeds covered in a coating resembling green velvet which stuck to the cotton fibers like Velcro. It took a full day of labor to "gin," or remove, the seeds from one pound of cotton. This was so inefficient that Upland Cotton was essentially worthless and the entire South was only exporting a few hundred bags of cotton to England each year.

Eli invented a machine called the cotton gin, which ginned cotton and cleaned itself. The South soon changed from an uncultivated wilderness to a wealthy blossoming agrarian region, eventually exporting as much as 920 million pounds of cotton to England each year. This did not liberate the slaves; au contraire, slavery boomed, with the price of slaves rising from $50 in 1800 to $1,000 by 1850. However, the price of cloth dove down 99%, and people worldwide were clothed in comfortable, washable clothing. Even the common man could own more than one set of clothing for the first time in history.

But Eli didn't strike it rich. His mistake? He tried to grab too big a piece of the pie.

But Eli didn't strike it rich. What was his big mistake? He tried to grab too big a piece of the pie. Recognizing the enormous benefit of his invention, he decided to set up his own cotton ginning centers where he charged farmers 40% of their crop. The Southerners found this ridiculous, especially coming from a Yankee, and began making their own crude cotton gins, waving a big thumb at Eli Whitney's patent. They even began a rumor that his machines were inferior, and soon factories in England wouldn't buy cotton ginned in his machines. He fought patent battles for years and ended up losing money on this world-altering invention.

Lesson #1: Every year we are tempted to make the coming year "the Big Year," when we fix all our bad habits. We're going to quit smoking, come home from work no later than 5:30 pm, go to synagogue daily, begin learning with a study partner once a week, and never say anything negative to anyone.

Let's learn from Eli. We may have the ideas for great innovations and positive changes, but we need to moderate them to ensure they will be doable. We can't bite a bigger piece than we can chew. In Social Work school, we learned the S.M.A.R.T. way to make goals; make them Specific, Measurable, Attainable, Realistic, and Time-Based. Just think where we'd be in 20 years from now if every year we were to take on one S.M.A.R.T. goal and actualize it.

After losing money on his gin, Eli needed cash, so he invented the system called mass production. Until then, most items were made beginning to end by one master craftsman, thus making every piece . If one part broke, the whole thing was useless. The U.S. Army was having a particularly difficult time manufacturing muskets. They took days to make, were expensive and, if one piece broke on the battlefield, the musket was useless, and the soldier became a sitting duck.

Eli invented a new system using high precision tools to manufacture parts. These parts could be assembled by any unskilled worker, and were entirely interchangeable. Thus, if a trigger were to break, a foot soldier would simply pull out a spare trigger and get back into action. The format Eli invented for the musket was adopted all over the world, revolutionizing manufacturing. Your car, washing machine, shaver, laptop, and bicycle are cheaper, easier to fix, and better as a result. Eli finally struck it rich.

Lesson #2: The problem Eli set out to fix can beset any of us. We often make resolutions which are complex and dependant on many factors. Here's one example: If I get up an hour earlier every day, and pray and exercise immediately after waking, then I'll be able to make my family a hot breakfast, and spend quality time with my kids before they go to school. That kind of resolution is dependant on far too many factors – if one detail breaks (you sleep through the alarm, your workout takes longer than expected, or one of your kids refuses to get out of bed), the entire resolution falls apart.

An example of a better resolution would be, "Every evening I will spend five minutes reviewing my day. I will make note of both the good things that should be repeated the next day, and the mistakes that should not." This is something that doesn't require other people's cooperation, it can be done anywhere, and at anytime in the evening, and if you miss one day you can be right back on track the next day.

Let's make sure our resolutions can be easily fixed if we slip, resolutions that can help us mass produce good deeds, and a happy life.

My 30 Days of Changing a Bad Habit and Doing Kindness

The Only Thing to Worry About on Rosh Hashanah
The Promise Of The Land
Which Chat Are You On?: Parshas Behar/Lag Ba’Omer
Do You Like Slow-Cooked Food? Thank the Jews
Comments
MOST POPULAR IN Rosh Hashanah
Our privacy policy