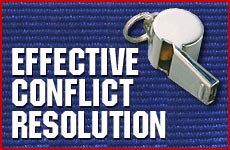 Disagreement is a natural part of marriage. Speak softly and definitely forget the big stick.

Disagreements can be a very healthy vehicle to promote expansiveness of vision and personal growth. The real secret to a good and lasting marriage is not lack of conflict, but how conflict is resolved.
Here are more tips for calm and effective conflict resolution.

When disagreeing, it's very tempting to make statements such as:

"You always do that."

"You're never here when I need you."

Such broad sweeping generalizations can be very damaging. No one is always wrong. No one always behaves negatively. And it obscures the issue at hand, putting the accused party on the defensive.

We wouldn't attack our children over a mistake they made. Don't we want to be equally sane with respect to our spouses? Don't we want them to know how precious they are to us?

Therefore, try to avoid generalizing. It will get your partner's back up before the conversation even begins.

If you have criticism to offer, try to precede it with a positive comment.

If you have a criticism, try to list the positive first: "You took out the garbage and did the shopping. That really saved me significant time and I'm very grateful. If next time you could buy fewer bags of potato chips and more fruit and vegetables, I'd appreciate it."

If you harness your creative powers, you can reframe many of your concerns in a positive light: "I like talking to you so much that I would really enjoy it if you would call me more often during the day."

2. Use a gentle tone of voice.

I think that the whole world would change for the better (speaking of generalizations) if everyone would learn to speak softly.

Your spouse, your children, your friends and colleagues, even animals respond much more positively to a request or complaint expressed in a soft, gentle manner. You could say the same thing loudly with much less effect and frequently create a hostile atmosphere.

Maimonides advised, "Speak pleasantly and softly when you admonish someone." (Hilchos Deos 6:7)

Have you ever watched people attach each other verbally in public? It's embarrassing and humiliating for both the attacker and the victim. A calm, gentle approach protects the ego of the other person and allows him to hear the rebuke more objectively.

Loud personal attacks are embarrassing and humiliating for both the attacker and the victim.

We sometimes feel that in order to be heard we need to be loud, maybe we need to yell and scream. This is a common mistake.

If you speak quietly, you will force the listener to pay close attention. And if you speak calmly there is a much lesser chance of your discussion deteriorating into a brawl. Even if your spouse is a screamer, your gentle tones will stop him in his tracks and force him to calm down too. And it's a great example to set for your children.

Marla used to look for excuses to fight with Ted, her husband of 10 years. But Ted never met her in the middle. He was a perceptive fellow and he recognized that his wife's need for an emotional catharsis frequently precipitated her angry outbursts.

He responded in calm, soothing tones. Marla was forced to react in kind. She would walk away with a strong sense of being loved, and now she rents a very sad movie when she's in need of intense emotional expression.

3. Find the Positive in the Moment.

I call this: "Stop the old tape you are playing and find a new one."

Miriam Levi has taught and written on Effective Jewish Parenting. She gives a very powerful example. Frequently when things are going wrong, we tell ourselves, "I can't stand it! I can't stand it another minute!" Mrs. Levi has a terrific response to this detrimental message. "Of course you can stand it. Being boiled in a pot of hot oil is something you can't stand. But this you can stand."

And of course, she's right. You have to change the tape you're playing over and over again in your head. Instead of "I can't stand it," try "I think I can, I think I can," (my personal favorite from The Little Engine That Could) or another alternative.

It's very helpful when you're in the middle of a rough spot in your marriage, and the door looks pretty tempting, to take a look inside yourself. What have you been telling yourself. Is it true or an exaggeration? Is there a more positive way you could put this? Does everyone else in the world really have a better husband/wife/mother-in-law? Could you deal with your frustration and affirm your marriage at the same time?

What we tell ourselves -- the tape we play -- is crucial to how we look at and handle each challenging situation.

No Time for Marriage

PODCAST: Accepting the Person I Married

My Appliance, My Spouse

Help! My Spouse is So Different than Me

Good Communication Comes Down to These Two Things
Why Are The Prayers Of Yom Kipur So Repetetive?
Ha'azinu 5783: A Time for Unity!
Twisted Thinking
Comments