The Myth Of Visible Diversity 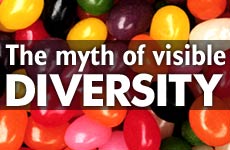 It's time to start wearing our Jewishness on our sleeve.

In recent years Corporate America and the media have worked hard to reflect an America that is visibly diverse. The company that I worked for until recently, MTV Networks has been a leader in working toward a diverse work force, and multi ethnic characters in programming. During my tenure there, I was educated, attending seminars and training programs to teaching me how to encourage visible diversity in the work place. For every job opening, there is a specialty headhunter to help us with recruitment in minority communities. Over the last two years all the major TV Networks have pledged to add more minority characters to their programming. All this work is to be commended and encouraged. It is important that we remain a country that celebrates our differences, and encourages people to maintain their ethnicity.

Sure we are included, as long as it doesn't get too Jewish.

Yet throughout all this there is a group that has been left out of the visible diversity mix, the Jews. Wait, I know what you are thinking. We don't look different; we don't speak a different language. How can we be visibly diverse? But when you look at corporate America and what is projected in today's media, it is rare to see Jewish culture and Jewish religious practices part of the regular fare. Sure we are included, as long as it doesn't get too Jewish.

Don't get me wrong, soon after Thanksgiving ends most Manhattan office buildings which are decorated with giant megalith-like Christmas trees, make sure to put a beautiful electric menorah underneath the trees. Sure, most companies send out really pretty cards, that have mistletoe, bulbs, and a menorah, along with the words Happy Holidays. With great adeptness they lump Chanukah in with Christmas, with a message like peace on earth -- a beautiful thought, but not message of Chanukah. And we are okay with that?

Chanukah is all about visible diversity. The Maccabees fought against both Antiochus and fellow Jews who said it was okay to be Jewish -- but not too Jewish. They fought against a Hellenistic culture that said that the literature and practices of Judaism were fine, but don't look too Jewish. No circumcision, don't observe Shabbat and or Torah -- they are too visible.

Corporate America has thrown Jews into the great white melting pot. Political correctness says it fine to be Jewish, but corporate culture says we can't be too Jewish. Companies that pride themselves on being diverse, would not think twice about having a company wide meeting during Shavout, or the company picnic on Shabbat. Maybe that is okay, but perhaps they should be reminded about it. Corporations that boast about their multi-cultural speaker series include great authors from all ethnic backgrounds, but don't include our culture -- we are not a minority. In hiring they go out of their way to do all kinds of diverse ethnic backgrounds, without checking how many of its employees wear a kippah, leave early on Friday's or, take off for Simchat Torah. Sometimes they do try -- like the corporate cafeteria that serves Matzo brie for Pesach (with ham).

Wanting to be like everybody else threatens the future of the Jewish people.

In no way am I suggesting that Corporate America is anti-Semitic. Big business reflects the "culture" of the American Jewish Community. How many times have you heard another Jew say that "so and so is too Jewish" or he "wears his Jewishness on his sleeve." Lets face it, the social pressures are to be like everybody else, and we like to think of ourselves as part of the majority. This attitude threatens the future of the Jewish people. And, if you agree that diversity is one of the things that makes America great, it is damaging to this country.

Maybe it is time for us to become modern Maccabees to take our Jewishness out of the closet and bring it to where we work, what we watch on TV, where our kids learn, where we shop. Lets face it, either way we aren't joining Winged Foot Country Club. Not only should it be okay to look Jewish, it should be okay to tell everybody else that we want today's society and culture to have a little Jewish in it as well.

Why not start writing the TV networks, tell them to have visibly Jewish characters on their shows. Not just someone giving presents on Chanukah or the stereotype of the old Jewish grandpa. I'm talking about a regular character that is an observant Jew. How about a judge on Law and Order who adjourns early on a Friday because of Shabbat, or maybe a doctor on ER who wears a kippah on a regular basis and walks to the hospital on Jewish Holidays. How about one of the kids who go to Boston Public taking off for Sukkot, or a character on one of my kid's cartoon shows who won't go to a fast food place because he keeps Kosher.

And while we are at it, can somebody tell some of our Jewish entertainers that it is okay to look Jewish. How about a billboard in Hollywood that says, "Hey Barbra Streisand, there are beautiful Jewish songs or Cantoral pieces! Enough with the Christmas albums already." Or one outside of Disneyland, "Yo, Michael Eisner, Disney is a very big company, can't it do one program that includes your Jewish Heritage?"

Maybe we should be writing our schools encouraging them to be diverse. At the same time they teach about Jackie Robinson, shouldn't we be encouraging them to talk about Hank Greenberg, and the reason he didn't break Babe Ruth's record, because when he hit 58 homers, no one wanted to pitch to the Jew. Or in the 1936 Olympics, it was ok for Jesse Owens to race in front of Hitler, but Marty Glickman was not allowed. Let's speak up and tell our school administrators that the secular social studies textbooks that talk about the Ten Commandments do so in a very Christian way and need to be changed. And while we're at it, let's tell them when our kids give historical dates using the term BCE and CE, don't look at them funny. Lets be too Jewish and tell school districts that the Saturday afternoon high school graduation ceremonies have got to go.

In the coming year, lets try to remember what the Maccabees really stood for and put it into practice. Lets make a stand for visible diversity. When you see our traditions being left out of the mix -- point it out, ask to be included. Wear your Jewishness on your sleeve; its what makes America great.