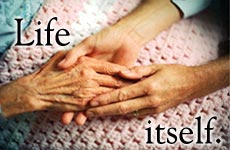 In the Netherlands emotional pain is sufficient legal justification to assist in one's suicide. What is happening to the immeasurable value in human life?

In the Netherlands, a 15-year-old needs parental consent to enlist a doctor's help in killing herself. If she waits until she's 16, although she needs to "involve" her parents in her decision, she need not receive their approval. Nor need she be suffering any terminal medical condition; emotional pain is sufficient legal justification to assist in her suicide.

Legal euthanasia in the Netherlands is defined as the "active termination of life on request." It does not include what is known there as "terminal sedation" -- the administering of morphine in quantities that relieve pain but also hasten death.

But if a Dutch doctor chooses to "terminally sedate" patients in pain without the consent of the patient or family members, "it doesn't need to be reported," according to Rob Jonquiere, a physician who heads a pro-euthanasia group, "Right to Die - Netherlands."

However many there may be, though, they are at least subtly encouraged in performing such "mercy killings" by the fact that the law in their country permits assisted suicide. "Terminal sedation" may not have similar legal sanction at present, but its goal, to be sure, is the same as the goal of assisted suicide: freeing people from pain, forever.

"Mak[ing] people happy" was how Canadian-born Dutch nurse, Lucy de Berk, referred in her diary to an unspecified secret she wrote she would take with her to the grave. She was convicted last March of murdering three terminally ill children and an elderly woman at two hospitals in The Hague.

We don't yet know what Charles Cullen's motivation may have been in having ended, as he has claimed, the lives of up to 40 patients in New Jersey and Pennsylvania hospitals over the course of his own career as a nurse. But it is certainly conceivable that he too felt he was doing a good deed in helping others in distress shuffle off this mortal coil.

Such sentiments, if not their promiscuous application, are easy to empathize with; most of us would readily act upon them ourselves for livestock or pets in terminus. At the same time, though, we maintain a deep commitment to something that Judaism has clearly and resolutely taught for thousands of years: human life is different.

Suicide is regarded by Jewish law as a sin, and "pulling the plug" of a patient on life-support machinery, even where natural death is imminent, is considered the taking of a life. All the Torah's laws, with the exception only of the three cardinal ones (idolatry, sexual immorality and murder), are put aside when life -- even for a limited period -- is in the balance.

Whence Judaism's exquisite valuation of even momentary human life? A likely reason lies in a recognition pondered by far too few, and far too infrequently.

It is not surprising that the terminally ill (or, as in Dutch law, even the gravely despondent) are seen in our times as prime beneficiaries of their own deaths. Ours is a culture, after all, where human worth is often measured by intellectual prowess or mercantile skills -- even by things like youth or physical beauty, or the capacity to convincingly impersonate a real or fictional character, or to strongly and accurately hit, kick or throw a ball.

The too-little-pondered recognition is that the true value of men and women lies elsewhere entirely, in men and women's potential to do good things -- to prepare, in fact, for an existence beyond the one we know. When that idea -- self-evident to some, challenging to others -- is internalized, a very different sensibility emerges.

And among the perceptions it affords is that there is immeasurable value in human life itself -- even in its minutes and seconds, and even when it is fettered by infirmity, immobility or depression.

Basketball or dancing may no longer be options in the confines of a hospital bed, and even tending to one's most basic physical needs may be impossible without help. But are acts there of sheer will -- like forgiveness, repentance, acceptance, commitment, love, or prayer -- any harder to accomplish, or any less meaningful? Are they compromised in any way by tangles of tubes and monitors?

Not even consciousness, at least as medically defined, need hinder what humanly matters most. We choose to take electronic brain activity as evidence of being meaningfully conscious, of the ability to think and choose, and then proceed to conclude that in the absence of such evidence, those abilities must no longer exist -- without a thought (at least a conscious one) of the immense tautology we have embraced.

We do not know, cannot know, when a human being is truly incapacitated -- when his or her soul has been released. Only when a heart has stopped beating can we be certain that life in its truest sense has ended. And so hastening or abetting the death of even a physically or emotionally compromised human being is no less an abortion of meaningful life than gunning down a healthy, happy one.

The attitude regarding human life codified in the Netherlands today is one toward which much of contemporary Western culture, unfortunately, is slouching. It is spoken of by sophisticates as "progressive," and indeed represents a progression of sorts, away from the Jewish religious tradition that is the bedrock of we call morality and ethics. The degree to which we manage to check that progression will be the degree to which we demonstrate that we truly understand what it means to be human.