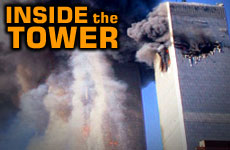 A rescue worker looks back to that fateful day.

Rabbi Chaim Baruch Gluck, a Foundation Member of Hatzalah New York, the emergency Jewish volunteer ambulance service for all members of the New York community, was inside the South Tower as it began to collapse. The following is his miraculous story which is excerpted from the book, "Even in the Darkest Moments."

While I was leaving shul on the morning of 9/11/01, phone calls came in from Hatzalah Volunteer Ambulance and the Port Authority Police respectively; an airplane had just struck the North Tower of the World Trade Center. Immediately I set off for Manhattan. On the way, I recognized the car in front of me; it was that of Rabbi Mechel Handler, the Executive Director of Hatzalah. (See http://www.aish.com/societywork/work/Through_the_Valley_of_Death.asp) Simultaneously with my arrival on the scene, in horror I witnessed the second airplane colliding with the South Tower.

After parking my car at the Twin Towers, I met with other Hatzalah personnel, who included Rabbi Mechel Handler, Dr. Richard Friedman, Rabbi Moshe Wulliger, Steven Zackheim, and Noson Jospehy. At that point, we were coordinating where our Hatzalah ambulances should be stationed in preparation for MCI operations.

Once both towers had caught fire, I joined a group of emergency rescuers that included firefighters, police officers, and other EMS personnel. As Chaplain of the Port Authority Police, I possessed the advantage of familiarity with the layout of the South Tower from previous work experience at the location, and was able to help grateful rescue personnel in locating entries and exits.

With the rush of people exiting the building, it became important to prevent panic, and we directed them towards the street exit. Those needing medical attention were filtered out to the best of our ability, and directed towards the EMS posts. During this initial rescue stage, one of the most horrifying things we had to witness was the gruesome and pitiful spectacle of victims landing nearby, after they had leapt from the upper floors of the Twin Towers.

Following several trips in and out of the building, I entered the second set of doors in the lobby. Suddenly, the lights went out completely. All I could see was complete and total darkness. Within moments, the building filled with smoke and soot. I was having trouble catching my breath.

At that moment, it sounded like ten thunderbolts around my head.

My eyes were burning and shedding tears uncontrollably. Next to me I felt a firefighter. I asked him why his flashlight was not switched on.

He pointed it straight into my eyes as though trying to prove that it was "working." Unbelievably, this high-powered searchlight was now as bright as a Chanukah candle flickering out. The smoke and darkness were of an intensity I had never experienced before.

The building started shaking as though it were about to come down upon us. At that moment, it sounded like ten thunderbolts around my head. I yelled for everyone to hold hands and form a human chain. There were eighteen of us, corresponding to the Hebrew "chai" which means life. I now think of that human chain as my chain of life. Whatever was happening was beyond comprehension for anyone there. All we could do was walk as fast as possible. We just kept walking, despite bumping into walls, poles, and all sorts of other objects. Eventually, we walked into the side of a fire engine. It was still so dark, we assumed that either it was parked inside the building, or we were outside with zero visibility.

When I looked behind, I could see a dark cloud chasing me.

In the midst of my fight for survival, constantly coughing or trying to catch my breath, I felt an arm grabbing me and pulling me to safety. A familiar voice yelled, "Rabbi Gluck, what are you doing here?" My rescuer was Port Authority Police Lt. Carbonaro. He placed me in the Port Authority Police command post, and then flushed out my eyes with large amounts of water. Just after I had taken a few minutes to regain by breath and eyesight, I again felt the ground start to shake. Later, I would learn the cause: the North Tower was collapsing.

I remember seeing the sign, Vesey Street, while running for my life. When I looked behind, I could see a dark cloud chasing me. Smoke was filling the air, while glass, metal, and all other types of debris were bombarding the earth all around. Barely seeing anything and battling to breathe, I came upon a bus with no passengers. I forced the door open and entered inside. From that time on, I have no recollection of anything except members of Hatzalah attempting to give me oxygen and wash me with water, and being totally covered from head to toe with debris.

How Hatzalah was able to find me is a miracle. I was told later that a person who identified himself as "Shimmy" was calling into the Hatzalah radio and giving my location to the dispatcher. Until now, I have not been able to identify this person, but I can only say that I would like to make this account into a "Thank You" to him.

Somewhere along the line, Hatzalah treated me in the back of an ambulance named Williamsburg 3. Numerous Hatzalah members and paramedics were there.

I was taken to Maimonides Medical Center on the ambulance, together with other Hatzalah members. The nursing staff showered me, and then treated me in the emergency room. Finally, I received a thorough eye exam. I received a call from the Port Authority, which requested me to set up at their headquarters a data bank of names of missing persons for help in assisting family members. Until late that evening, and again the following morning, I was engaged in carrying out that urgent task for the Port Authority.

The next few days I was busily occupied at the Medical Examiners Office with family counseling and identifying the remains of missing people. As chaplain for the Port Authority, for some of the time I was required at Kennedy International Airport and Newark Airport.

In advance, I have to apologize for any information omitted from this record, or which is out of order. I still do not remember exactly piece-by-piece all the events of that horrific day. There are some periods of time of which I have no recollection at all.

It was only much later that I realized the grave danger I had faced. The reality sank in after hearing one of the Police Officers, Lt. Richardson, recount how he and I were together during the South Tower's last moments. He was one of a mere handful of survivors from the collapsing building. After reaching safety himself, he had concluded that he was the last living link in the chain that began with him and finished with me. In fact, he contacted Hatzalah regarding my funeral preparations. The real "Thank You" goes to the Almighty for saving my life.

"Even in the Darkest Moments" is comprised of authentic stories of personal miracles from those who survived the Twin Towers tragedy. All proceeds go to Hatzalah's life-saving work.

COVID-19: Conspiracy Theories and Anti-Semitism
What Makes Eli Run?
The Tyranny of Materialism
Science Enters the Mysterious Inner World of Consciousness
Comments
MOST POPULAR IN Current Issues
Our privacy policy