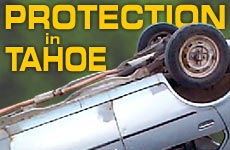 A surrealistic car crash triggers an uncanny string of events.

I was driving down I-5, heading toward Lake Tahoe with my husband and kids. The 70 miles per hour speed limit was beyond my comfort zone, and my eyes were glued to the road. So I failed to turn my head to the left when switching lanes. When I saw the car in my blind spot, it was already too late.

Overcorrecting, I had the car zigzagging all over the highway. There was no time to think, no time to feel. All of my focus went into trying to correct that steering wheel. It wasn't until we went flying off of the road that I heard my husband, Dov, who until then had been coaching me in the ways of "savvy" driving, gasp, "Oh, my God!"

A split second of terror. The next thing I knew, we were upside down in a ditch.

It should have felt nightmarish, but instead there was silence.

Somehow, I intuited that everybody was all right. "Well, we don't need these anymore," I stated, removing the keys from the now useless ignition. It was surrealistic to be staring down at the steering wheel.

It should have felt nightmarish, but instead there was silence. It was as if we were outside of ourselves, looking down on the situation. Our two sons, ages 6 and 2, were in the back, suspended from their booster and car seat like cocoons from a rafter. Thank God for safety regulations.

I noticed the smashed windshield. What I didn't notice was that the car was totaled, with a hole in the ceiling and one tire sticking out at a right angle to the rest of the car. The car was obviously in as much shock as I was -- my sense of calmness could not have been otherwise explained.

Dov was all action, undoing the seatbelts. We were helped out of the side windows by a variety of people who had magically appeared. Everything seemed fine, except for my lower back which ached. As a result, I was kept supine.

An eyewitness, who had seen our Honda flip over three times, came running with a blanket. When I started laughing, she covered me with the blanket, assuming I was in shock. But I was laughing with gratitude. It was finally getting through to me that we had just narrowly escaped death, and that we had been blessed. Very blessed. Something had protected us against all odds.

Somebody had called the E.R. at U.C. Davis. It started to dawn on me that the car was no longer an option and that we were waving goodbye to Tahoe, at least for now. But Shabbat was coming in a few hours, and our homemade challahs and other delicacies were in the trunk. Where would we stay? How would it all work out?

We let go of these questions as the ambulance arrived, loaded us on, and zoomed down the highway, the siren wailing in our ears.

My six-year-old thought that it had all been a blast. Flipping over was as good as a roller coaster, and the ambulance was a far better adventure than Tahoe. My two-year-old was fixating on the last sighting of his bottle, which had remained behind in the mud.

At the hospital, the children's tests, as well as mine, all came back negative. Nobody had a scratch, in spite of all that broken glass. The children were coloring and the nurses were enjoying them; it was a welcomed change from the various shooting victims and crack dealers who often came under their care.

The doctors would not release Dov. Something was wrong.

As for Shabbat, all of the hotels in Sacramento were filled, due to a weekend-long jazz concert. We telephoned our rabbi and rebbetzin back home in Eugene, Oregon. Half an hour before Shabbat, the Orthodox rabbi in Sacramento that they knew retrieved us. Even our food had been salvaged -- the mechanic who had towed the remains of our car had sent the contents of our trunk to the hospital. Guardian angels seemed to abound, beyond what we then imagined...

The doctors would not release Dov. There was something wrong. They were afraid that there had been aorta damage, which would apparently not be perceived by him, but would result in his demise within days. So an angiogram was ordered, and I didn't see him until right after Shabbat.

In spite of my natural sense of optimism telling me that Dov would be fine, I was restless, eager to know the results of those tests and have my optimism confirmed. Pumped with anesthesia, Dov had effortlessly endured the procedure. His aorta was fine. But there was a radiologist who had carefully studied his x-rays.

"I think that you have lymphoma," she had told him. "You'll want to go straight to the doctor when you return home." This being said to someone who was so healthy that he didn't even have a doctor!

On Sunday morning, we continued to Lake Tahoe, where my sister and her family were waiting. Somehow, we had a wonderful time, without dreading what the radiologist had said and what the following week might bring. Dov had had a past history of reactive lymph nodes. They had never proven to be anything of concern. Probably just that, we had assumed.

But I think that our ability to move on was not really based on logic. There was a sense that God had taken us so far, and would certainly continue to carry us forward. The calm that had defined our reaction to the accident continued, but this time it was not born of shock, but rather of faith.

When we returned to Eugene, the doctor confirmed the radiologist's diagnosis. After a biopsy, it was discovered to be Hodgkins disease. Of all of the possibilities, this lymphoma was considered to be the most curable, especially since it had been caught early. Dov's parents had flown in from Israel that week, and we all shared our relief that Dov's condition had a promising prognosis.

Halfway into his treatment, the doctors were shocked at what they had found.

We managed somehow to feel grateful for what he had been given, rather than resenting that there had to be a condition at all. For Dov, this was a time of tremendous spiritual growth. He was receptive to the power of illness to transform, and transcended the physical challenges of chemotherapy and radiation with hardly a complaint.

And that power of transformation did not stay contained. A mikvah was being built in our small community, and the visiting supervisor, a Chassidic rabbi from New York, gave Dov a very special blessing. "Building a mikvah is a formula for healing," he advised.

So Dov became the local overseer of the building project, in spite of his weakened state.

Halfway into his treatment, the doctors were shocked at what they had found. The tumor had shrunk twice as fast as they had predicted it would. They said they had no logical explanation for this rapid movement.

But we didn't need logic. We had been blessed with "hashgachah pratit" -- personal Divine intervention, and gratification in knowing that there is a reason for everything under the sun.

Brynn Olenberg Sugarman lives in Seattle with her husband and three children. They lived in Israel for 9 years, and still maintain strong connections there. Mrs. Sugarman has a B.A. in Creative Writing from SUNY Binghamton and an M.A. in English Literature from the Hebrew University in Jerusalem, and has had poetry published in a variety of literary periodicals.

Next Year in Jerusalem, Conclusion
In the Shadow of David and Goliath
Where Do the Laws of Nature Come From?
Saadiah Gaon, Rashi and Maimonides: How Three Rabbis Revolutionized Judaism
Comments