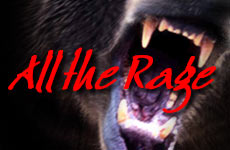 Murder out of rage is not primarily a moral problem. It is an extreme reaction of an individual who just realized he is not in charge of his world.

The Israeli tabloids graphically presented the situation -- twelve snapshots of a group of people remarkable for nothing except for their unremarkability.

These were people who had been killed in the past two weeks in various petty brawls and fights. While the Jewish people have their share of criminals, it was always thought to be mainly white-collar crime and petty thievery. The idea that murder and violence could occur with such frequency shocked many Jews. Even worse, it was murder for petty reasons -- someone was killed in a fight over a beach chair, another over a parking space, and yet another in a silly pub argument.

What was causing this murder spree? The heat? The security situation? The economy?

What was causing this murder spree? The heat? The security situation? The economy?

All of the above were duly cited, along with appropriate jeremiads about "we have become like Sodom."

But to call all murder by the name "murder" is an oversimplification. True, morally speaking, all murders are equally wrong. But if we are dealing with a situation that we are trying to remedy, we must distinguish between the various underlying causes of murder.

NOT AN ISSUE OF MORALITY

Can teaching children about the sanctity of human life prevent this?

I think not. The problem is not the person's moral compass per se. Even an otherwise devoted, decent person may become swept up in his rage and do things that horrifies him. These people are mortified at the crime they perpetrated and can never forgive themselves for what they did. It is not murder that we are dealing with, but rage and frustration. What are the roots of rage? How do we control frustration?

In order to deal with rage, we need to understand the mindset that produces it.

A person is born with a very strong sense of self. He wants, he struggles, he acts, he accomplishes. As one grows up, the idea of "I accomplished" becomes identical to "I am." Eventually failure of achievements becomes identical to failure of the person. If the person gauges a task as being within his abilities but fails, the person is frustrated. He feels that his very self is constricted and diminished. It is worse when the failure is caused by some sort of object blocking his path, and worse still when a person is the object blocking his victory.

A person is driving madly to make an important meeting. The following jumble of thoughts races through his mind: "I'm going to speed and hit the office at 9:00. It'll take me a minute to park and I'll be in the building at 9:01 and at 9:02 I'll barge in. I know that I can rely on myself to make it in a tight situation."

Suddenly someone ahead of him is driving slowly. He furiously pounds on the horn, "Who is this idiot cruising in front of me?! Can't he move more quickly? What right does he have to cut my freedom of movement?"

The driver soon realizes he will miss the meeting and the hapless person in front of him is now his direct enemy, striking at his self-image.

Frustration is the feeling that one's personality is being hemmed in and choked. Rage is the reaction of desperate resistance to this emotional choking, akin to the reaction of thrashing to physical choking. "I am the Master of my Universe! How dare you obstruct me?"

Living according to Jewish ideals engenders a different perspective for the person. The global superstructure of the universe is a God who has willingly and purposely placed the person in this world in order to bring out the best of his or her moral self. A person's life consists of challenges, aspirations, tests and false leads, but all of those serve the purpose of developing the person's moral self.

Judaism does not preach a meek withdrawal or a passive fatalism.

Judaism does not preach a meek withdrawal or a passive fatalism. Man is not an inanimate object, meant to "survive" various God-ordained events. Rather, he is a being with real freedom of choice enjoined to "rule over the earth and conquer it" [Genesis 2]. But his ambition and freedom are only part of the picture. He does not know, a priori, which goals are attainable and which will never be his. He tackles all worthy goals with equal zest and drive. But when they are not attained, he puts it into perspective -- they were meant to be tests of sorts. I did my best and that was sufficient.

Imagine a person taking an entrance exam at a prestigious university. The student discovers that the test is completely unfair and impossibly difficult, and he gets very upset. He can react in a number of ways -- he cheats, or blows up in rage and curses out the university administration, or gets depressed and goes out to get drunk.

Imagine the same student taking a test with NASA, the space agency. As he is getting upset at the unfair test, a suspicion begins to sneak in. Perhaps they are not testing his knowledge, but rather his stamina, patience or character. Maybe they are looking for people with qualities of endurance needed for harsh space-module environments. He decides to be a model of equanimity.

The Torah does not teach us a simplistic, resigned "it's all for the best." Rather it broadens out horizons by teaching us that our personal perspectives are narrow and time bound, while God's perspective is broad and timeless. No one knows what, in particular, his life is meant to accomplish. He therefore approaches each task with zest and energy. But if after having done his best, he fails, he is not frustrated or enraged. He has passed with flying colors; it is just that we are not aware of what the test was.

WHO IS IN CHARGE?

One of the great figures of the last century was the last Rabbi of Brisk, Rabbi Y. Z. Solovetchik. Known for his brilliant mind, he was a fastidious observer of the Jewish law, and approached each decision with a tremendous amount of focused thought and extreme tension.

One of his hardest decisions came at the beginning of World War Two, when German planes were bombing Warsaw. He needed to decide where the safest place would be for the community to stay during the bombing. Thousands of lives depended on his decision, and the Rabbi's tension while weighing the options was unbearable.

When the bombing started everyone began trembling, frightened to the point of hysteria. Everyone, but the Rabbi. Someone asked him, "If you were so tense before the bombing, I expected you to be a total wreck by now. And yet you are so calm!"

The Rabbi answered, "Before the bombing, we were given the task and responsibility to make the right decision. The tension was unbearable. Once the bombing started, our responsibilities have been discharged. It is solely God who is making the decisions. And my trust in Him is complete."

The Rabbi was expressing the attitude of a person who lives within the world of God. So long as the baton of action has been handed to him, it is his responsibility totally. No amount of effort or strain is excessive. But as soon as the baton is handed back to God, and man no longer has any course of action, then no matter what the result is, there is no reaction of frustration, rage, anger, disappointment, or even nervousness. At this stage, such reactions belie a lack of belief in the larger overwhelming Divine that is the encompassing structure of the Universe. As great as the tension and strain was on the Rabbi beforehand, because at that stage he was in charge, so calm was he afterwards because God was in charge.

Facebook is Radicalizing Us
Korach 5782: Visit to Lift the Spirit
That Time The Ivy League Found A Way To Limit Jewish Enrollment
Would You Rather Be Right or Happy?
Comments
MOST POPULAR IN Current Issues
Our privacy policy