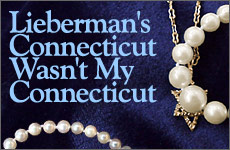 I was a Jewish kid who didn't know what it meant to be Jewish, who was painfully, earnestly trying to fit in by concealing the Jewishness I knew nothing about.

My Connecticut was Joseph Lieberman's Connecticut, except in one respect. And that made all the difference.

On Saturdays in the fall, when all the red and orange elms along Route 7 glowed like fire and the New Canaan Rams played against Stamford High, the cheerleaders jumped up and down as if our lives depended on it, and exhorted the bleachers with all their might: "Two-four-six-eight, who do we appreciate!"

On Saturdays in spring, as the dogwoods bloomed, we crammed for the SAT's, the college entrance exams.

And on Saturdays in summer, we'd cruise down Elm Street as the crickets sang, and our existential anxiety and longing found a voice in Neil Sedaka's "Breaking Up Is Hard To Do."

And in what grand event did it culminate, all those long hard years of childhood and adolescence in the adjoining suburbs of Stamford and New Canaan? What awaited at the summit? When did we finally learn our worth, where did we and everyone else find out how we'd done, climbing the precariously steep social mountains in his hometown and mine?

At the Senior Prom.

The senior prom was the ultimate measure of one's popularity and success.

That was the ultimate measure of one's popularity and success. Get a good date, have the time of your life at the dance, then all you had left to worry about was an acceptance letter from a good college.

So Joseph Lieberman's Connecticut was just about like mine, but from what I've read about him in the weeks since he was nominated for Democratic vice-president, it seems his childhood might as well have taken place on a different planet.

For I was a Jewish kid who didn't know what it meant to be Jewish.

While I was painfully, earnestly trying to fit in by concealing the Jewishness I knew nothing about, he seems to have been securely anchored in his essential identity and enjoying the world around him.

Another way of putting it, more succinctly, is that I'd never heard of Shabbat.

What would life have been like if, on Friday night, I hadn't gone to Teen Canteen at the Y.M.C.A, but had instead gotten all dressed up to please God (instead of the boys) and had joined in for dinner together with my parents and sisters, with candlelight and song?

What would it have been like to get all dressed up on Friday night to please God instead of the boys?

What would it have been like if on Saturday, instead of working on his weekly magazine article or going to the Field Club to play tennis, my father had ceased and desisted from his incessantly busy schedule and stayed home to just be -- with us?

It's something hard even to imagine. To have our much-adored and hard-working Daddy and Mommy to ourselves from Friday night to Saturday night? To not compete for attention with his writing pad and her vegetable garden, his golf clubs or her shopping at Safeway? What would it have been like?

The most immediate benefit would have been the most obvious, psychological one: If parents demonstrate once each week that the family takes precedence over everything else, by erecting a firewall against interruptions and distractions, their children can't help but get the subliminal message that they themselves are important.

In the last decade or so of his life, my father lost a good amount of sleep thinking, in the middle of the night, about how the demands of his career had taken him away from his family too much, and wondering relentlessly what would have been if he could have managed things differently. If only he'd known that he could have made up for the rest of the week, and all the constant responsibilities his work incurred, with just one day out of seven.

More far-reaching was the benefit that would have come about in regard to our Jewish identity.

IDENTIFYING WITH THE VICTIMS

In those decades, the single most important factor in being Jewish seemed to be the Holocaust, yet what child is eager to identify with victims?

I knew virtually nothing about Judaism, or religious observance, or Jewish history, and my ignorance was in exact proportion to my sense of shame. My murky sense of identity and insecurity were such that when a school friend asked in seventh grade if it was true that I was a Jew, I replied, "No, I'm Unitarian," and my cowardice so disgusted me that it took years to get over the self-contempt engendered by the denial.

Not until I become observant did I utter the three-letter word -- Jew -- without fear.

Not until I started becoming observant, as a young woman, did I utter the three-letter word without fear.

The most profound benefit would have been in the larger perspective that Shabbat creates in one's mind.

The ancient rituals and mundane restrictions of the Jewish Sabbath -– the candle-lighting and singing, the father's blessing of the children, the refraining from the telephone, from cooking, from writing, from driving – serve to remind us that there is a larger reality than any particular human being's angle on it.

In other words, I -- the little suburban girl struggling desperately for success and acceptance and popularity and good grades and cool clothes and who knows what else -- might have discovered that there's more to existence than the traumas and tribulations of life as we know it.

I would have known what Joseph Lieberman as a teenager must have known -- when he had to stay home one Friday night in June. He had been crowned King of Stamford High School's Senior Prom -- socially speaking, what greater honor was there? -- but he didn't attend, because it was Shabbat.

There’s No Good Way to Kosher an Alaskan King Crab

Elie Wiesel and the Radicalization of a Hassidic Girl

A Jew's Quest in the Peruvian Amazon

My Palace, My Sukkah
The Connection between Israel and the Jewish People
Grit and Torah
Why We Can’t See True Reality
Comments
MOST POPULAR IN Spiritual Odysseys
Our privacy policy