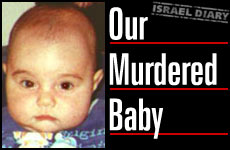 Infanticide shakes Israel to the core. The world lets it pass unnoticed.

A 10-month-old baby girl, on the playground, her head placed in the sniper’s scope, shot dead in her father’s arms.

This cowardly, beastly act tore a hole in every Jewish heart. The pain was compounded by the drama of Shalhevet’s mother, crouched for hours on the floor of the playground, not allowing the burial society to touch her dead baby.

All of Israel is shaken. Why? Because this is not about targeting settlers. It is about targeting Jews. All Jews. I am reminded of the words of PLO secretary general Marwan Barguti, who calmly told MBC Saudi television why the PLO would justify a 1995 attack that killed 21 people at a bus stop at Netanya: "This is an area that we have yet to liberate."

So this week, as we were still quivering from the murder of 10-month-old Shalhevet, the news struck of a terrorist bomb in Jerusalem's busy Talpiot industrial and shopping area.

A few hours later, another suicide bomb, this time in the capital's French Hill neighborhood.

The attacks were barely touched by the foreign press. When Palestinians fired shots this week at my neighbor's house in suburban Modi’in, the incident was not reported by the media, anywhere.

That Shalhevet’s murder was not the top international headline, I could understand -- had the media not a few months ago made the unfortunate death of a Palestinian boy, caught in crossfire, top news for many weeks. That incident left a lot of questions unanswered, the most important being what was he and his father doing in the heart of crossfire shooting, and how the media came to be perfectly placed to photograph it.

The day of Shalhevet’s murder, speaking at the opening meeting of the Arab League summit in Jordan, UN Secretary-General Kofi Annan said the world has every right to criticize Israel for occupying Arab land and for its "excessively harsh response" to the Palestinian uprising.

Annan uttered not one word critical of the Palestinian terrorism and street violence.

Meanwhile in Hebron, in the aftermath of Shalhevet’s murder, the IDF general in charge of the area, Amnon Cohen, was not available, because he was still mourning the murder of his father, Baruch Cohen from Efrat, gunned down by Palestinians on the road last week.

Scores of Jews have been killed by Palestinians in recent months, and about 500 Jews are victims since Oslo began. But the murder of Shalhevet was the hardest to bear. What kinds of beasts target a baby girl with sniper fire? Is there any cause that could justify such cruelty? And in Hebron of all places -- city of Abraham, Isaac, Jacob, Sarah, Rebecca, Leah. Like Shalhevet, didn’t our greatest ancestors take their first steps and speak their first words there?

For us, Shalhevet’s murder reveals a stark reality. Our hopes for peace, for the next generation, have been drowned in the brutal hatred fomented by the Palestinian leaders and their media.

As Nobel laureate Elie Wisel recently said of Arafat: “I accuse him of murdering the hopes of an entire generation. His and ours.”

Shalhevet’s murder is bewildering. The great Rabbi Yizrael Zev Gustman once said of himself that “it is impossible to depress me or humiliate me.” Why? Because Rabbi Gustman was holding his only son in his arms when the Nazis shot his son dead. Nothing, Rabbi Gustman said, could ever match that horrible feeling.

So although Arab terrorists make no distinction between killing of a grandmother in Netanya, a new immigrant at the bus stop in Holon, or a teenager on the Internet, the body of this 10-month-old baby is still the heaviest one to carry to the grave.

With thanks to Harvey Tannenbaum

Netanel Felber's Message: Don't Give Up
Chukat 5782: Let’s Play the Blame Game!
The Sin of Moses: The Two Ways to Communicate
In Aftermath of Chicago’s July 4th Shooting, Local Moms Provide Countless Points of Light
Comments
MOST POPULAR IN Israel
Our privacy policy