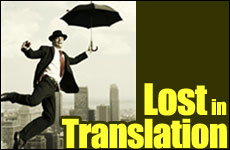 A business trip to French speaking Montreal taught me a lesson in Jewish unity.

I like business trips. You stay in nice hotels, get your expenses paid for, and get to watch movies on the plane that you have already seen on 1000 foot screens, but now you enjoy them on a twelve-inch monitor, or rather, six inches - because the bald man with the large head blocks half of the screen. That's why when the opportunity comes up, I usually jump at the chance.

"Teresa is going to book a flight for you," my boss said authoritatively.

"No problem, where am I going?"

Montreal is a great city -- I've been there before as a tourist. But on my previous trip I noticed something about the place. What was it again? Right -- they speak French.

"What exactly am I going to be doing?" I asked hesitantly.

"I think so," my boss replied, seemingly unconcerned.

"Paula, I don't speak French," I confessed. Maybe she assumed that I did because of my penchant for eating chocolate eclairs.

"There's no one else who can go, and you've been working on this file and know the players."

"Okay, well can someone from our Montreal office accompany me," I asked in a last ditch effort.

"Sorry, we are short staffed. We have to have someone attend, and it's got to be you. But don't worry -- nothing happens at these pre-trials anyway."

As I got off the plane in Montreal I couldn't help but notice how...well...French everything was. Signs were in French, people spoke French, and the residents even looked French. I am not sure how exactly, perhaps because they were better dressed. I also noticed that their license plates carry the motto "Je me Souviens," which translates as "I remember." I asked my taxi driver what they were remembering and he responded, "I remember what the English did to the French." I am not sure what the English did exactly, but I take it they weren't remembering the time we all bought them ice cream sundaes.

I am not sure what the English exactly did to the French, but I take it they weren't remembering the time we all bought them ice cream sundaes.

I arrived at what the taxi driver informed me was the court house (the sign outside could have said "pogo sticks for sale," and I wouldn't have known the difference). I went to the information booth, showed them my court documents and they pointed me towards courtroom #5.

The participants filed in and we sat around an enormous boardroom table. Someone walked in, made some sort of announcement and everyone stood up. A woman in her 50s entered and I assumed that this was the judge, so I rose as well. She made a few introductory remarks, and what she was describing sounded succulent. I wanted to order it all.

I counted 20 people at the table. This was one of those trials with lots of parties and lots of issues, so the judge suggested that everyone introduce themselves. One by one the participants stood up and made a brief introduction, and suddenly I was angry with my parents for only giving me one first name. They all had names like "Jean-Jacques Philip" or "Claire-Marie." I felt so inadequate. Occasionally, someone would insert an additional comment after their name, which would usually illicit a laugh from the crowd. I guess it lost something in the translation.

I was the very last person to stand up. For a brief moment, I contemplated saying, "Je suis un grand pamplemousse," which if I recall correctly translates to, "I am a large grapefruit." That is the only French expression that I have retained from school. I wondered if that intro would also have had the crowd in stitches. Just in case, I decided to go with the more conservative, "Hello, my name is Richard and I am here on behalf of XYZ corporation."

I got the feeling that all of the sudden they were all doing a lot of "remembering."

The pre-trial began and sure enough I didn't understand a word. I don't know if I was hoping for a Splash-like scene where the mermaid just watches TV for a few hours and then suddenly starts speaking English, but it didn't happen for me. When the judge adjourned for lunch I went up to her and asked if I really needed to be there. After all, I was adding no value. She denied my request, saying that she wanted me present "just in case." In case what? I turn into a mermaid?

After we returned from lunch I took out a book from my carry-on bag and began reading in the courtroom. Right next to the judge. I had no choice. I was bored out of my mind and getting hungry just listening to them talk.

The proceedings finally wound up around 5pm, at least I think they wound up, because everyone left. My flight was set for 8pm, so before I went to the airport I decided to visit one of the Jewish neighborhoods of Montreal, grab a bite to eat and find a synagogue where I could pray the evening service.

I entered the shul with some trepidation, fearing that like many other things on my trip to Montreal, perhaps their prayer service would also be foreign to me. Fortunately, I found the same prayer book with the same prayers that are used by the Jewish people throughout the world. And these prayers are the very same ones that our people have been uttering for thousands of years.

While on the plane home, I reflected on the irony. There I was in Montreal, a modern North American city, with people who were educated in similar institutions, who practice the same profession, and who probably enjoy many of the same pastimes that I do, yet I had so little in common with them -- so little that we could not even communicate. The Jewish people on the other hand have every reason not to have anything in common -- we have lived in disparate lands, have spoken different languages, and have developed different customs, yet we have so much in common, and remain so close.

I have always thought that our common history and ability to remember this history is one of the things that has kept us together over the years. Ironically we Jews and the people in Quebec live by a similar creed -- we remember. As for my business trip to Montreal -- I have a feeling I will always remember that too.

Traveling with My Father

A Good Friend
Morality and Abortion: Three Views
There Are No Limits
Adam and Eve Were Vegan
Comments