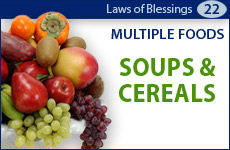 A hodge-podge of ingredients produces some complex rules.

In this class we'll continue our discussion of ikar v'tafel, by tackling two of the more complex issues: soups and cereals.

Let's start with a simple chicken soup. The bracha for any plain broth is Shehakol. This applies also to broth that contains a small amount of vegetables, since the ikar is the soup. So a chicken soup that includes bits of carrots and onions gets a Shehakol. Since the vegetables are added only to enhance the soup, they do not warrant a separate bracha.1

The bracha on vegetable soup is Ha'adama. Since the vegetables are the main ingredient, the broth is considered tafel and does not receive a separate bracha. 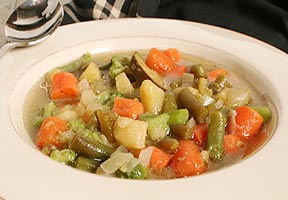 Now let's explore deeper: You cook up a yummy vegetable soup, but decide that for lunch you only want the broth and not the vegetables. Should you say Ha'adama or Shehakol? Generally, when a soup (i.e. water) absorbs the taste of vegetables that are cooked in it, the bracha on the soup becomes Ha'adama.2 However, this rule is subject to the following conditions:3

When all three of these conditions are met, then the soup broth itself becomes Ha'adama. Otherwise, it is Shehakol.

In the last class, we learned that when soup nuts are added to soup, two brachot are required. By contrast, when a soup is cooked with noodles, the Mezonot said on the noodles covers the liquid as well. 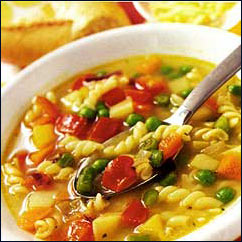 The difference between these two cases is that the noodles were cooked together with the soup, as opposed to the soup nuts which were simply added after the soup is cooked. As we've learned, when a solid and a liquid are cooked together, they become one entity, requiring only one bracha. So essentially, noodles cooked in a soup are treated no differently than a barley-vegetable soup, whose bracha is Mezonot.

However, not so fast. If you also desire the soup and it is the majority, then this requires two brachot: first on the soup, then on the noodles.5 (In situations of doubt, you could recite a Shehakol on some other food, having in mind to cover the soup-broth as well.6)

Now here's an amazing paradox: We said above that if you cook a vegetable soup, and decide to eat only the broth, the bracha will (usually) be Ha'adama.

And yet... we learned in class #6 that when a fruit or vegetable is pureed, it loses its bracha (Ha'adama or Ha'aitz) and becomes Shehakol. Therefore, the bracha on a soup made from vegetables that dissolved completely in the liquid is Shehakol. This includes split pea or tomato soup, as long as there are no chunks of vegetables remaining. If pieces of vegetable are still discernible, then Ha'adama is recited.7 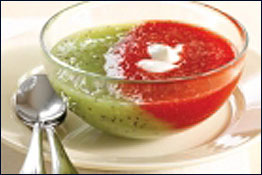 Just like vegetable soup, fruit soup receives the bracha of the fruit contained in the soup. When there are both ha'adama and ha'aitz fruits, the bracha is determined according to the majority type.

Unlike vegetable soup, however, the bracha on the liquid soup when eaten alone is Shehakol. The reason for this is that fruits are not generally used to make soup; therefore, the water that the fruits are cooked in does not acquire the bracha of the fruits.8 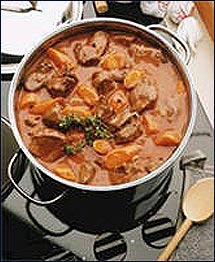 Let's apply some of the principles we've learned to the case of cholent, the ubiquitous Shabbat stew. Cholent made with barley, meat and potatoes is considered one food, and requires only one bracha. According to the rules of ikar v'tafel, the bracha should be determined by the majority ingredient. Nevertheless, since cooked barley is Mezonot, which has preferential status, the bracha on cholent is Mezonot, regardless of what is the majority ingredient.9

However, if the pieces of potato and/or meat are so large that you eat bite-fulls of these with no barley, then the meat and potatoes would require their own separate brachot.10

"Hey, Mom, pass me some of those double-toasted multi-grain crispy-chewy sugar-coated flake-pop-loops!"

With over 100 varieties of breakfast cereals on the market today, when it comes to saying the right bracha, it really helps to read the ingredients and know the principles involved. We've already discussed many of the relevant issues throughout the course – for example in class #6 regarding grains whose states have been altered, and in class #9 regarding what process is required for a grain to have the bracha Mezonot. And of course, since breakfast cereals typically contain dozens of ingredients, we have learned how to handle that vis-a-vis the rules of ikar v'tafel.

At this point, we now have enough information to systematically discuss the various types of breakfast cereals, and to understand what bracha to say and why. 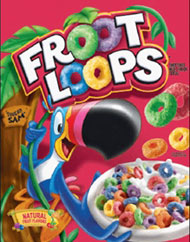 Wheat Flakes – The bracha is Mezonot on cereals made by cooking wheat, then shaping them and toasting/baking. (Wheaties and Shredded Wheat)

Bran – The bracha on a cereal (All Bran) made solely from bran (the outer shell of the grain) is Shehakol.12 Many bran cereals, however, have wheat flour or oat flour added, which makes the bracha Mezonot. (Raisin Bran, Bran Flakes)

Rice Krispies – These are made by cooking the rice and then toasting. As such, the bracha is Mezonot. This applies also to Cocoa/Fruity Pebbles and to Special K (which is made from ground rice that is cooked).

Corn Flakes – We learned that corn flakes are manufactured in two different ways:

Corn Flour – The bracha is Shehakol for any cereal made from corn flour (Corn Chex). A few caveats: 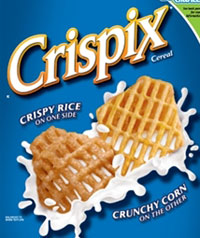 Ikar v'Tafel – Crispix cereal has a composition of crispy rice on one side of the square, and crunchy corn on the other. Since neither is the ikar or the tafel, two brachot are required: First say Mezonot and eat from the darker (rice) side, then say Ha'adama and eat from the lighter (corn) side.

Puffed Cereals – Honey Smacks and Sugar Crisp (now called Golden Crisp) are essentially whole wheat kernels that are "popped" (or "puffed"). Since they are not cooked (i.e. unprocessed or slightly processed), the bracha is Ha'adama.16

Granola – We learned in class #9 that granola consists mainly of oats that are steamed and then baked. This process does not have the effect of cooking. Since the grains are considered still in their original form, the bracha on granola is Ha'adama. (If the oat particles adhere to one another, then the bracha would be Mezonot.) Note that most granola bars are produced from cooked oats, and thus the bracha is Mezonot.

Wheat Germ – The bracha on wheat germ depends on the processing: cooked wheat germ is Mezonot; toasted wheat germ is Ha'adama (since the heating is only applied to deactivate the enzymes, not to cook the germ).17

A chart including the proper bracha on various cereals appears at the end of this course, as well as class #44.

A Final Word: The After-Bracha

Here is a nice summary of ikar v'tafel, offered by Rabbi Bodner:20

This concludes class #22 and the topic of ikar v'tafel. In the next class we'll learn about the important topic of unauthorized brachot.