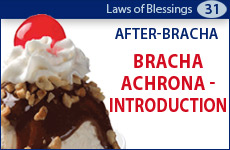 The guidelines for saying bracha after finishing to eat.

Until now, we've been learning about bracha rishona – the blessing we say before consuming food or drinks. This is not where the story ends, however, because in most cases, we need to say another bracha after we finish eating. This is called bracha achrona – literally, the final blessing, or colloquially called the "after-bracha."1

Before eating, when you're hungry it's easy to say, "Thank God – let's eat!" The blessings we say before the meal are an expression of that gratitude. But after the meal, when you're stuffed and have no desire to see food ever again (wishing that your pants had an elastic waistband), that's when you specifically need to be reminded to express gratitude to God and deepen that connection.2 This is one explanation of the verse, "Yeshurun [the Jewish people] grew fat and kicked" (Deut. 32:15); after being satiated, there is a natural tendency to feel a bit of an independent rebellious streak.3

In this class, we'll learn that there are different types of bracha achrona, depending on what type of food you've eaten. (The prescribed bracha achrona is required even if, for some reason, you ate without saying a bracha rishona.)4 And we'll need to take into account how much and how quickly you ate that food, to determine whether or not you should be saying a bracha achrona at all.

How much did you consume, and how quickly?

We learned earlier that a bracha rishona is recited before eating even a tiny amount. However, when it comes to a bracha achrona, you'll need to have done a halachic "act of eating." This is conditional on:

Furthermore, the rules will be different for solids and for liquids, as we'll now see.

(a) QUANTITY: To say a bracha achrona, you have to consume at least a kezayit of food (literally: the size of an olive).6 In today's terms, this is estimated as slightly less than one fluid ounce, or 30 cc.7 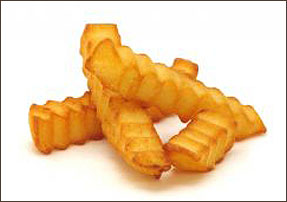 Since different foods are not  rectangular in dimension, it is not always easy to precisely estimate the volume of a kezayit. As a reference point, here are some common examples:8

In the examples mentioned above, the foods are pretty solid and dense. But it's not always so simple determining the size of a kezayit.

To determine how much food is needed to say a bracha achrona, let's examine some cases:

If the air holes are small enough to be "intangible" (i.e. not obviously noticeable), then that piece of cake is regarded as a kezayit – the small air holes contribute toward the calculated volume. 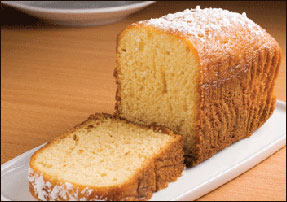 However, a piece of "sponge cake" is so puffed up that in measuring the kezayit we do not count the air holes, but would need to eat extra to compensate for the loss.10

One more case: You have a piece of cake that is a kezayit, but then you compress it to less than a kezayit. Even though it still represents the same quantity of food, since this cake is now "smaller than a kezayit," you do not say a bracha achrona.11

(b) TIME: In order to be called an "act of eating" that requires a bracha achrona, the kezayit of food must minimally be consumed in kiday achilat pras (literally, "the time it takes to eat a portion" – referring to a small meal). Practically speaking:

As mentioned earlier, liquids have their own set of rules, since the act of drinking is conceptually different than the act of eating. So when consuming liquids: 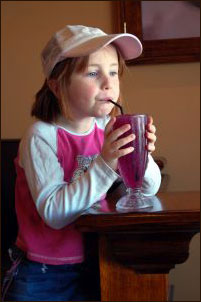 (a) QUANTITY: The minimum measurement to qualify for a bracha achrona is one revi'it (lit: "quarter of a loge," a Talmudic measurement).14 In modern terms, a revi'it is measured as 4.5 fluid ounces, or 133 cc.15

Other opinions say that drinking as little as one fluid ounce (30 cc) – i.e. the same kezayit measure that we use for solids also qualifies for saying a bracha achrona.16 Therefore, to avoid getting into a situation of doubt, it is best to drink either less than 1 oz, or more than 4.5 oz.17

(b) TIME: In order to be called an "act of drinking" that requires a bracha achrona, the revi'it must be consumed kiday shetiyat revi'it (literally, the time it takes to drink a revi'it). To avoid any halachic doubt, you should drink the 4.5 ounces  more or less straight, only taking one short pause in the drinking, or at least continuous sipping within 30 seconds.18 If you did not drink that quickly, you would not say a bracha achrona on the drink.19 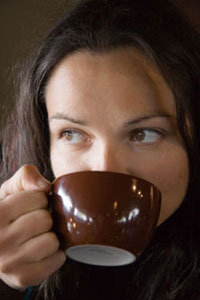 A common application of this halacha is when drinking hot coffee or tea. These are usually drunk in small sips, and as such a revi'it is not consumed kiday shetiyat revi'it.20 Therefore, according to the prevailing opinion, a bracha achrona is not said. In such a case, however, there are two suggested options:

What are the rules for a food which began as liquids but were then congealed into creams, such as yogurt or ice cream – or for frozen foods which melt in your mouth?? Are they regarded as a solid (that requires a kezayit consumed in 3-4 minutes), or  or are they a liquid that requires a revi'it in two helpings (which wouldn't be possible for such foods)? The answer is: The answer is: This too is unresolved and out of doubt one should not say a bracha achrona. However, if the food is frozen or thick enough that it does not pour and you ate it in 2 minutes, then you can certainly say a bracha achrona.23

Now what about a clear broth soup? Even though it is eaten with a spoon, it follows the rules of a liquid.

We just learned that if you consume between 1 and 4.5 ounces of a drink, it is not clear whether or not you need to say a bracha achrona. Here are some other cases where your obligation is uncertain:

How should we approach these situations?

The simple answer is that in case of doubt, you cannot say a bracha achrona.24 This is based on the principle of safek brachot l'hakel – in cases of doubtful blessings, don't say the blessing.25

Of course, it's best to avoid getting into these situations in the first place. So try to eat and drink a measurement (shiur) which clearly obligates a bracha achrona, and be aware of how much time it takes to be consumed! 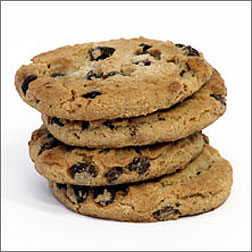 Mike just ate a cookie, but isn't sure if it was the size of a kezayit. In order to resolve the doubt, Mike should consume more cookies (or another mezonot food which requires the same bracha achrona), making sure it is clearly a kezayit in volume, and do so within the proper time of 4 minutes or less (kiday achilat pras).26

What if there are no more cookies (or no other mezonot foods) available? Don't worry, there is still a good option available: Get someone else who is obligated in this particular bracha achrona to say the bracha, while having in mind to cover you as well. We will learn about this extensively in class #38.

Sometimes, you may find yourself in doubt as to whether or not you said a bracha achrona – life is busy and it's easy to forget! Again, the best solutions are to have someone else exempt you, or to eat a new food requiring a different bracha rishona but the same bracha achrona. Failing this, don't say the bracha achrona if you are in doubt.27

Okay, this is enough material to digest for one class (pun intended). In our next class, we'll learn how to determine which bracha achrona to say, particularly when you've eaten a variety of foods.

36. Time and Space
Scientific Curiosity and the Divine Encounter
Mind Over Milkshakes
Love the Convert
Comments
MOST POPULAR IN Jewish Law
Our privacy policy
Aish.com Is Looking for Great Writers