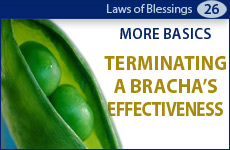 Certain actions can signal your intention to stop eating.

How long does a bracha last? If you say Mezonot at breakfast and you want to eat a piece of cake later in the day, is your original bracha still in effect? When does a bracha "run out"?

Essentially, a bracha has no specific time limit. Theoretically, you could start out the day saying Shehakol on water and continue eating "shehakol" foods all day without reciting another bracha.1 Practically, however, this is almost never feasible. The reason is because as soon as you "decide you are finished" eating (or drinking), your bracha loses its effect. As we learned previously in class #18, just as a bracha is only effective for those foods which you intend on eating, similarly a bracha only lasts as long as you intend to continue eating. Once you are "finished" eating or drinking, you may not eat or drink any more without saying a new bracha.

Intent to End the Meal

Beyond this, hesech hada'at occurs as soon as you perform a step that precedes a bracha achrona. For example, once you wash Mayim Achronim, the ritual hand-washing that immediately precedes Birkat Hamazon (Grace After Meals), this indicates that you have decided to end the meal.3

Mayim Achronim is a definitive action that ends the meal. But consider the following cases: 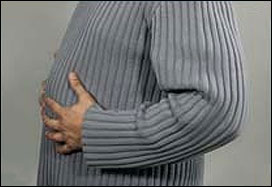 Since you have basically decided to stop eating,6 is that considered a hesech hada'at? If you then change your mind and decide to eat a little more, is a new bracha required?

In some of these situations, where you've signaled the end of the meal and then change your mind, you could technically resume eating by saying a new bracha. But since the rabbinic authorities differ over the nuances of these halachot, it is best to complete the after-bracha, and then say a new bracha rishona if you wish to eat more.7

Some authorities are of the opinion that even a mental decision is considered a hesech hada'at.8 Even though you have not yet begun the bracha achrona or even announced your intent to do so, the very decision that you no longer want to eat terminates the effectiveness of your bracha rishona. Although this opinion is not unanimous, in practice, once you have decided not to continue eating, it is best not to eat any more until after saying a bracha achrona9 (and then, of course, a new bracha rishona).

What if you doze off to sleep while eating? This is not considered hesech hada'at, and you may continue eating without a bracha.10

If, however, you consciously decide to take a nap, it is considered hesech hada'at and a new bracha is required before eating again.11 Of course, you really shouldn't be in this situation in the first place – you should have said a bracha achrona before going to sleep! 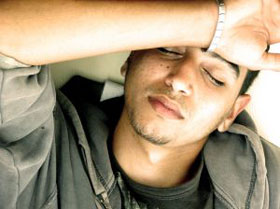 Note that the halacha here is different than our previous cases of hesech hada'at. In the other cases (e.g. making the decision to stop eating), you'll need to say a bracha achrona and then a bracha rishona before eating again. In the case of a nap, however, you only need to say a new bracha rishona to continue eating.

What if you head over to the sofa during a meal and sleep for 20 minutes – is that considered a doze or a nap? The halacha defines "dozing off" as done in a sitting position, while "napping" is done in a lying position.12

We learned in class #19 about Da'at Ba'al Habayit – the idea that since a guest does not know what foods are going to be served, his brachot automatically cover any other foods requiring that bracha.

Similarly, when a guest thinks he is finished eating, or announces, "Let's say a bracha achrona," it is not considered a hesech hada'at, since he would continue eating if the host offered him more food.13

This same criteria applies, for example, to a husband: If his wife offers more food and he feels uncomfortable refusing, then he could continue eating, even though he had already decided to stop.14

This halacha cuts both ways, however. If you are a guest and the host announces, "Let's bentch," then you are required to stop eating15 – no matter how much you're hoping for the last bite of chocolate cake.

Actually, there is one option: If you had specific intention to continue eating, you may continue as long as you avoid any misunderstanding and announce to the others presents that you have no hesech hada'at and want to continue eating.16 While it's not the most comfortable thing for a guest to do, it will get you that last bite of chocolate cake (or sip of water, as the case may be).

This concludes class #26 on Hilchot Brachot. In the next lesson, we'll learn about another kind of hesech hada'at, called shinuy makom ("change of place").

43. 100 Blessings Each Day
Blocked Goals and Anger
Why the Mezuzah is Placed on a Slant
Faith: the Axis Upon Which the Wheel of Science Turns
Comments
MOST POPULAR IN Jewish Law
Our privacy policy