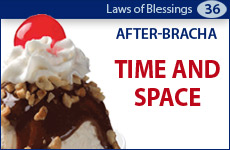 An after-bracha is subject to restrictions of when and where.

We learned in class #26 that if you eat continuously (with no hesech hada'at in between), no new bracha rishona is required. It follows, therefore, that one bracha achrona will also cover the entire eating session.

Mike began his marathon 6-hour work session by eating pretzels and drinking water. He continued nibbling throughout with no hesech hada'at. When Mike finally turns off the computer to leave, he will say Al Ha'michya and Borei Nefashot.

But it's not always so simple. In this class, we'll discuss the important rules regarding the limitations of time and location in saying a bracha achrona.

You may recite an after-bracha as long as you still feel the effect of the food or drink in your stomach; i.e., you have not yet become hungry again since eating the food. (In halacha, this is a specific point in the digestion process called z'man ikul.) After eating a big meal, this effect can last for hours.1

Regarding drinks, the moment you no longer feel the effect of the drink (i.e., you are thirsty again, which can occur rather quickly on a hot day), the after-bracha has been "lost" and you may not recite it until a new revi'it is drunk. That's why it is important to say the bracha achrona as soon as you finish drinking, even if you might decide to drink again later.2

But what if you got caught up with other things and you didn't say a bracha achrona right away? Here the halacha differentiates based on whether you had a snack or a heavier meal:

If you ate a fairly light snack – whether of bread or other foods – the amount of time you have to say a bracha achrona depends on when you ate your last bite of food:3 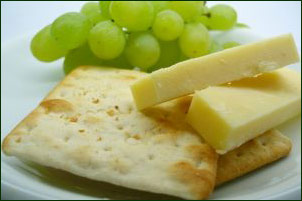 Mike ate an apple, and an hour later realized that he forgot to say a bracha achrona. Mike should now get some other food requiring the after-bracha of Borei Nefashot (e.g. lemonade), say Shehakol, drink it – and say Borei Nefashot with the apple also in mind.

If, for some reason, this option is not available, you can still say a bracha achrona for up to 72 minutes after the last bite.

The above rules apply to a lighter snack. However, if you ate a large quantity of food – i.e. to the point of satiation – then the rules are as follows:

Mike finished eating supper at 7:00 p.m. and feels full. At 9:00 p.m. he feels somewhat hungry again. The z'man ikul in this case is two hours, and after that time Mike can no longer say his bracha achrona.

First of all, it is always preferable to say a bracha achrona before leaving the place where you ate. This is important because when the food and the dirty dishes are in front of you, your mind is on the meal and its accompanying bracha achrona. But once you leave, it is easy to forget... and before you know it, the time limit has passed.7

Even if you plan to remain in the same place, it is a good habit to say the bracha achrona immediately after eating, before becoming involved in other activities.8

As background to this discussion, we need to know how "original location" is defined. Here is a summary of the principles we learned in class #29: 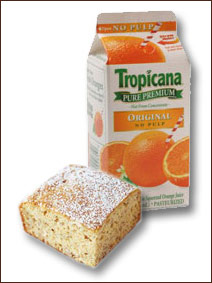 As we said, it's always best to say your bracha achrona before leaving the place where you ate. But let's discuss what happens if you did change locations:

You popped out to a café for a mid-morning snack of orange juice and banana cake. You are now obligated to say Al Ha'michya (for the cake) and Borei Nefashot (for the juice). However, you rushed back to the office for a meeting without saying any after-brachot.

As a general rule, you should never leave without saying a bracha achrona.14 Exceptions to this are:

Al Ha'michya and Birkat Hamazon are a whole different story. In class #30 regarding the laws of shinuy makom, we learned that Birkat Hamazon and the Three-Faceted Blessing (Al Ha'michya, Al Ha'gefe or Al Ha'aitz) must be recited in the location where you ate your meal.17 Even if you left that spot, you are obligated to go back and say the bracha achrona in the location where you ate.18

So in the case of the café where you ate banana cake, no matter how big a rush you are in, you need to say Al Ha'michya before leaving the café.

If You Mistakenly Left

What happens in the event that you did not say Al Ha'michya (or Birkat Hamazon, as the case may be) at the café and now you're already back in the office?

The above rules apply to Birkat Hamazon and Al Ha'michya. The halacha is a bit more lenient with regard to Al Ha'aitz and Al Ha'gefen, the bracha achrona if you had dates or wine at the café. In this case, if you mistakenly left, you can go ahead and say a bracha achrona at the office without eating any more fruit or drinking wine.22 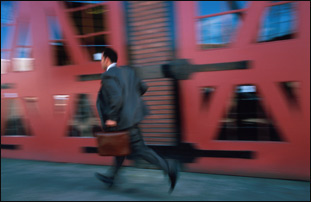 For those who are always rushing from one place to another, there is a more elegant solution. We learned previously that when saying Hamotzee, if you originally intend to finish your meal in a different location, then as long as you have some bread (even less than a kezayit) in the second location, it's 100% fine to bentch there.23 For example:

In the morning you are in a rush to catch the train. You'd like to eat a bagel, but you won't possibly have enough time to eat and bentch. So when saying Hamotzee, simply have in mind to finish your bagel on the train and say Birkat Hamazon there.

This "stipulation" only works with bread, but not any other foods.

One final halacha: If you are eating outside, you need to bentch within 4 cubits (approximately 7 feet) of where you ate.24 So if you were eating on a park bench, before you wander off for a walk,bentch on the bench!

This concludes class #36. In the next class, we will conclude the laws of bracha achrona.

One Drink Too Many: My Journey of Breaking Free from Alcohol
The Scandalous History of the Aleppo Codex
Who was Two-Gun Cohen?
Why Really Everyone Believes in Free Will
Should Jews Support Ukraine?
The Jews of Cuba
Comments
MOST POPULAR IN Laws of Blessings (Adv.)
Our privacy policy