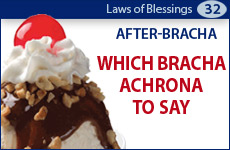 In the last class, we began learning the rules of bracha achrona, the blessing said after consuming various foods and drinks. We established that to be obligated in a bracha achrona, you need to have consumed enough volume within a proper period of time. Let's do a quick review:

Once it's clear that you have satisfied this requirement, you now need to work out which particular bracha achrona to say.

There are three possibilities:

The Three-Faceted Blessing (Bracha Mai'ain Shalosh) – so called because it resembles the first three blessings of Birkat Hamazon – is said if you ate a minimum quantity of either:

However, the text of the bracha varies slightly depending on which of these food types you have consumed. Colloquially, the bracha achrona for each type is referred to by how the text starts:

For wine and fruits, the closing words of the Three-Faceted Blessing differ depending on whether the produce grew in Israel or in the Diaspora,6 due to the extra holiness of the Land of Israel which affects even the produce.7 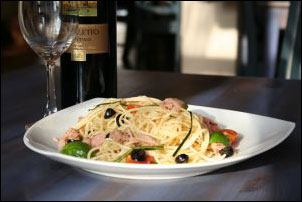 The Three-Faceted Blessing has an extra phrase inserted for Shabbat, Rosh Chodesh and holidays. If you forgot to add this line, post facto the bracha is still valid.8

Let's say you've consumed a sufficient quantity of more than one of these products. For example, you had a large plate of pasta with some tasty white wine (within the required time frame).9 Rather than making two separate after-brachot, you should say one Three-Faceted Blessing, combining the opening and concluding texts of both Al Ha'michya and Al Ha'gefen.10

In this example, the beginning of your bracha achrona would sound like this:

And the end of your bracha achrona will sound like this:

When combining these into one blessing, the various phrases are said in this order of priority:

What about where you needed to say more than one part – e.g. you ate pasta and drank wine – but in saying the bracha achrona you mistakenly said only the words for Al Ha'michya. In such a case, you need to say another full bracha of Al Ha'gefen. However, if you realized your mistake in the middle of the first bracha (before reaching the "Baruch Ata Ado-noy" at the end), you should go back to the words Al Ha'michya and correct your mistake.12

The after-bracha for all other foods is Borei Nefashot. This covers, for example:

The meaning of the blessing Borei Nefashot is that God gives life to all creatures, and fulfills our basic nourishment needs like bread and water.17 Beyond this, we thank God for giving us the "luxury package":18 To supply the body's need for nourishment, God could have created tasteless vitamin pills, or have put all the vitamins into something bland like oatmeal. Instead, with great kindness, God created oranges and bananas so that we get our vitamin C and potassium in the most pleasurable form possible.19

• Recall that we learned in class #8 that saying Borei Pri Ha'gafen on wine will generally cover other drinks whose bracha is normally Shehakol. Similarly, if you drank enough wine to obligate the saying of Al Ha'gefen, then you do not say a bracha achrona on any other drink (e.g. lemonade) that would normally warrant its own Borei Nefashot.20 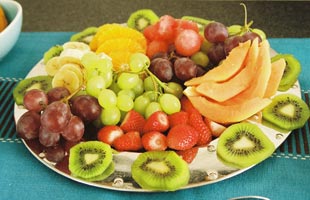 • The bracha of Al Ha'gefen also covers any grapes that you ate, post-facto.21

• Similarly, if you ate enough of the "five fruits" to obligate the saying of Al Ha'aitz, then you do not say a bracha achrona on any other fruit that would normally warrant its own Borei Nefashot.22

Jody attended a lecture where they set out a tray of fruit – dates and orange slices. Jody ate wholesomely. For a bracha achrona, she said Al Ha'aitz on the dates, which also covered the orange slices.

This assumes that Jody ate a kezayit of dates independently. If not, and the kezayit is only reached with the help of the orange slices, then she should say only Borei Nefashot (and not Al Ha'aitz).23

At the next lecture in the series, Jody was happy to see that the fruit trays – in addition to the dates and orange slices – also included pineapple chunks. Jody ate lots of everything. For a bracha achrona, she said Al Ha'aitz on the dates, which also covered the orange slices. She also said Borei Nefashot – because the pineapple, whose bracha rishona is Ha'adama, is not covered by the bracha achrona on the dates.

This concludes class #32. In our next class, we'll learn what bracha achrona to say when you are eating a variety of foods mixed together.