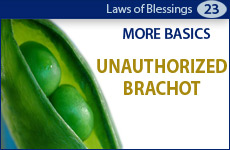 An unnecessary bracha is a problem of "saying God's Name in vain."

In the previous classes we learned about ikar v'tafel. Now let's move on to a related topic, one that touches on the essence of all brachot.

The third of the Ten Commandments tells us not to utter God's name in vain.1 This refers not only to swearing falsely in God's name, but also to mentioning God's name in the form of a bracha when halachically inappropriate.2 There are two types of improper brachot:

A bracha levatala is a bracha said in vain – i.e. it is said for no reason, or its purpose is not fulfilled.4 This violates the prescribed conditions that the Sages set for brachot.

You hold up an apple, carefully saying the words "borei pri ha'aitz," and then realize that the apple you are holding is completely rotten and inedible.

This is a bracha levatala because it ends up serving no purpose.5 So what should you do in such a situation? Later in this class we will discuss a method for how to "correct" a bracha levatala.

A bracha she'ayna tzricha is an unnecessary bracha – i.e. it was said on a food that was already covered by a previous bracha.6 Although the bracha is in one sense "fulfilled" (i.e. the food is eaten), nevertheless the bracha is unnecessary and hence improper.

You begin your meal with bread, saying the bracha Hamotzee. You then take a piece of chicken and say the bracha Shehakol.

Since the bracha on bread covers other foods contained in that meal – e.g. chicken – your second bracha was totally superfluous, a bracha she'ayna tzricha.

Beyond this, one is not even allowed to cause a bracha she'ayna tzricha to be said.7 This means that you may not say a bracha when it could have been avoided, as in the following case:

You sit down to a meal and first say the bracha Shehakol on the chicken. You then proceed to say a bracha on the bread.

Since the bracha on the bread would have covered the chicken as well, you should have said Hamotzee first and avoided the bracha Shehakol altogether. By reversing the order, this caused an unnecessary bracha. 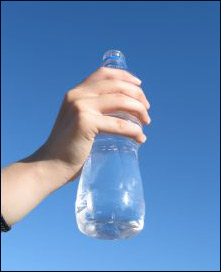 You come home from a long day at work and smell delicious home-made bread. "Dinner will be ready in five minutes," your wife calls out. You grab a drink to quench your thirst, saying the bracha Shehakol.

Had you waited until starting the meal, the bracha Hamotzee on the bread would have covered the drink as well. Does this mean that you should have waited, as not to cause a bracha she'ayna tzricha (the extra Shehakol)? The answer is no. Since the bread was not ready yet, and you were thirsty right now, you were not obligated to wait to take a drink.

It is important to note that the rule of "not causing an unnecessary bracha, when it would have been covered by another bracha" has the following exception: One may say a bracha on an appetizer that precedes bread, e.g. a grapefruit, since this is the normal sequence of a meal.9

You pour yourself a cup of apple juice, say the bracha Shehakol, and lift the glass to your mouth when suddenly... it slips from your hand and spills all over the floor. 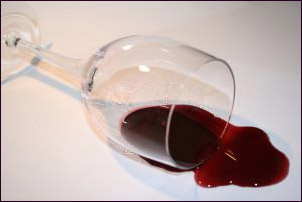 What can you do in order to "save" this from being a bracha levatala?

1) The simplest advice is to pick the cup off the floor, and drink the few drops of apple juice remaining in the cup.10

3) If this is not possible, you could take another food that was "covered" (as in #2 above) by the first bracha.12

4) Finally, if none of these options exist, you should recite the following phrase, known as Baruch Sheim:13

As a praise of God, Baruch Sheim compensates, so to speak, for the previous dishonor to God.14

The above guidelines apply if the bracha levatala has already been said. But what about a case where you've begun a bracha, and in the middle realize that it's unnecessary? Here are the rules:

What happens if you are in doubt about whether you've already recited a bracha?

Mike sat down to enjoy lunch with his best friend. They become so engaged in animated conversation, that Mike suddenly stopped and said, "Hey, did I say a bracha yet on the pretzels?"

If you are in doubt whether or not you said a bracha, you may not say a new bracha "just in case." By doing so, this would create a possible bracha she'ayna tzricha.16

So here are some good solutions:

When teaching children to say brachot, one is permitted to say the name of God in order to show the child the correct pronunciation.22

Similarly, when teaching an adult, the name of God may be uttered when necessary. For example, you could say a bracha word-for-word along with someone who doesn't know how to do so on his own.24

By the way, any time you hear someone else saying a bracha, it is proper to answer, "Amen." This is an affirmation of the blessing as a praise of God.25 (More details in class #38.)

Laws of Blessings
previous
Article #23 of 44
next
Like What You Read?  Give Jews around the world the chance to experience engaging Jewish wisdom with more articles and videos on Aish. It would make your mother so proud and as a nonprofit organization it's your support that keeps us going. Thanks a ton!

37. Bracha Achrona: After the Fact

38. Being Motzi Others
Meet the Real You: Yom Kippur
Why Bats Sleep Upside Down and The Secret of Yom Kippur
Kubaneh, Yemenite Bread with Spicy Tomato Sauce
Comments
MOST POPULAR IN Jewish Law
Our privacy policy
Aish.com Is Looking for Great Writers

Meet the Real You: Yom Kippur
Why Bats Sleep Upside Down and The Secret of Yom Kippur
Kubaneh, Yemenite Bread with Spicy Tomato Sauce
Vayelech 5783: Regret and Repent
Rabbi Sacks: Focus On the Important, Not the Urgent
Put Your Foot Down: Are Human Feet Poorly Designed?
Everything Bagel Pizza
Jews and Weight Loss
Scientist Asserts Earth Was Designed
Save the Children: Yvonne Nèvejean and Queen Elisabeth of Belgium
1 2 3 … 2,913 Next »