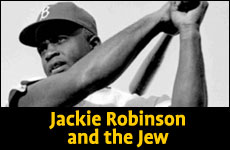 The new movie, “42,” the inspirational story of Jackie Robinson who heroically broke baseball’s color barrier, brought it all back to me.

I admit it. As a kid, I was a crazy Brooklyn Dodgers fan.

An immigrant, a little boy who fled from the horrors of the Holocaust, I couldn’t get enough of the game that was then clearly the national pastime. I desperately wanted to become a real American, and I quickly learned that, in the immortal words of Bill Veek, “For Americans there are only two seasons – winter and baseball.”

My father, a long bearded, scholarly, pious and traditional Jew had a hard time understanding my obsession with baseball. As the Rabbi of a congregation, he thought it more than strange when I would beg him to include the Dodgers in his prayers. He would try to have me explain to him why I felt it was so important for my team to win at something that was no more than a game, concluding his bewilderment with the proverbial question, “But is it good for the Jews?”

They were the underdogs – probably the main reason why a Jewish kid like me identified with them so strongly.

Yet living in Brooklyn I couldn’t help but absorb at least some of the culture of my neighborhood. Even a yeshiva boy knew growing up meant sharing the joys, and far more often the pains, of rooting for a team affectionately known as the Bums of Brooklyn. Yes, in the early ‘40s the Brooklyn Dodgers were mainly inept, hapless and helpless. They were the underdogs. And that was probably one of the main reasons why a Jewish kid like me identified with them so strongly.

Anti-Semitism was an ever present reality in those days. Walking to yeshiva through an Italian neighborhood would regularly mean taunts and curses, if not actual beatings, for me – just as my beloved team had to bear the scorn and prejudice of fans fortunate enough to have more respectable clubs representing them.

Even though I lived in Brooklyn there was nothing to stop me from becoming a fan of the despicable New York Giants or, God forbid, the even more hated New York Yankees. But that would’ve been almost akin to spiritual conversion. You don’t give up your faith just because it’s difficult to be a Jew – and you certainly don’t change your baseball allegiance just because your home team is going through a terrible season.

My Dodgers were underdogs who suffered at the hands of those physically stronger and more adept. As a Jew how could I not empathize and idolize them?

And then came 1947 and the daring move by Brooklyn Dodger owner Branch Rickey to sign Jackie Robinson to play as the first African-American in the major leagues. It marked the end of segregation in professional sports but for Brooklyn it turned out to be something far more meaningful.

At the end of Robinson's rookie season with the Brooklyn Dodgers, he had become National League Rookie of the Year with 12 homers, a league-leading 29 steals, and a .297 average. In 1949, he was selected as the NL's Most Valuable player of the Year and also won the batting title with a .342 average. As a result of his great success, Jackie was eventually inducted into the Baseball Hall of Fame in 1962. And the Dodgers won pennants in 1947, 1949, 1952, and 1953.

For the first time the long-suffering cries of Brooklyn Dodgers fans at the end of every season of disappointment to “Wait until next year” – a mantra with an almost eerie parallel to the Jewish hope for salvation expressed annually by the words “Next year in Jerusalem” – seemed no longer appropriate. Next year was this year. The Brooklyn Dodgers were winners.

But my Jewish connection nonetheless became even stronger. True, we were no longer underdogs; my emotional connection was no more based on a sense of mutual recognition of enmity from “the others” for a team it was fashionable mock and to ridicule. But how could I as a Jew not empathize with the incredible courage of the star player of my team who was taunted and tested, loathed and isolated, physically injured and harmed – just because he was a member of a racial minority. His “disability” was color; mine was religion. And so of course I rooted for the Dodgers all the more. In a sense they were “the Jews” of baseball.

And Jackie Robinson became my second favorite player on the Brooklyn Dodgers.

Yes, in spite of my adulation of the talents of clearly the best player on the team as well as my admiration for Robinson’s struggle to cure baseball’s bigotry, there was another player I chose as my all-time hero. And that is a story I need to share because of the way it brought my obsession with baseball to an incredible conclusion.

The Dodgers not only had an African-American on the team, they had an actual Jew. Sure, there had been some Jews in the major leagues, a rare few with exceptional records. We knew all about Hank Greenberg, the Jewish first baseman for the Detroit Tigers whose nickname was “the Hebrew Hammer.” We were in awe of the famous story of how, in 1934, out of respect to Jewish tradition he refused to play on Yom Kippur even though the Tigers were in the middle of a pennant race and he was not in practice a religious Jew. But Greenberg was not a Dodger. He was a member of our tribe but not of our team.

I needed a hero from the club I idolized. Not just Jackie, but a Jew. And finally Goody Rosen, the son of Russian Jewish immigrants, a left-handed centerfielder of no more than moderate ability – in baseball terms, “he had trouble batting his weight” – joined the team and enjoyed the rabid and total devotion of a Rabbi’s son.

Here I need to tell you what my total support as a fan meant. I was too poor to be able to afford buying a ticket to get into Ebbet’s Field. The closest contact I had with my heroes was to peddle my bicycle from my home in Borough Park, a one hour trek, in order to camp out in the parking lot adjoining the outfield fence. From there I could hear the roar of the crowd, feel some of the excitement of the game, and stand in wait for an opportunity to retrieve the rare but possible ball that might be hit out of the park.

I desperately wanted a major league baseball. But not just any baseball. My dream, my fantasy, was to salvage a ball knocked out of the park by my “Jewish brother”. A home run ball by Goody Rosen would indeed be a miracle – especially since they were so very infrequent – but with the optimism of youth I persevered in my mission.

And of course I was never successful. My dream remained unfulfilled.

Fast-forward two decades. I am now a Rabbi with a congregation of my own. I have many serious responsibilities. One day I officiate at a funeral for a prominent person who met an untimely death. I eulogize him as befits the good life that he led and attempt to offer some comfort by referring to Judaism’s belief in life after death.

The mourners are grateful for my remarks. Other people step forward to tell me how much my words meant to them. One of them, a stranger to me, takes a little more time than the others to convey what my talk meant to him. He expresses to me how much he admires my faith and my ability to communicate my thoughts with such spiritual impact. I find it extremely humbling and complimentary to have him tell me, “I envy you; I wish I had your talent.”

Shortly after he leaves, a member of my congregation says to me, “Do you know who that was that was just talking to you? He used to be a major league ballplayer who played for the Brooklyn Dodgers. His name is Goody Rosen.”

And that’s when I realized that in the grand scheme of things when I add up my blessings from God, the gifts of my faith and my heritage are worth more than even a World Series grand slam home run – although I never did get that ball I wanted.

The Last Jedi and the Force of Family

Star Trek and God
In the Shadow of David and Goliath
Where Do the Laws of Nature Come From?
Saadiah Gaon, Rashi and Maimonides: How Three Rabbis Revolutionized Judaism
Comments