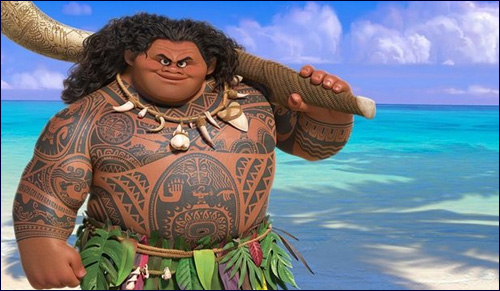 1. The movie has some catchy tunes. 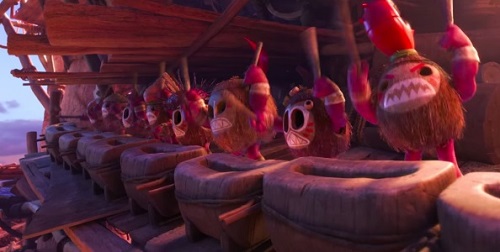 Moana, the new Disney princess movie about battling climate change, has all the standard Disney movie songs – the Introduction Song, the Yearning Song, the Song That the Villain Came Up With for Some Reason, and the Goofy-Personality Song. It should be enough that the people who haven’t stopped singing that song from Frozen can finally just Let It Go.

But unlike Frozen, which took place in the land of Freezing Our Tuchus Off, Moana takes place in Hawaii, which is Ancient Polynesian for, “Land that has a huge surplus of vowels due to a shipping mix-up with Eastern Europe.”

The movie places a large emphasis on Polynesian god characters, who in this fictional world actually exist. I guess if I accepted a talking snowman, I can make my peace with a shape-shifting mountain-man with tattoos that dance around.

I refer here to Maui -- a mischievous demigosh with an enormous fish hook that he has to carry around because there’s no way to sheath that.

3. If you can shape-shift into any animal you want, 90% of the time it’ll be a giant bird. 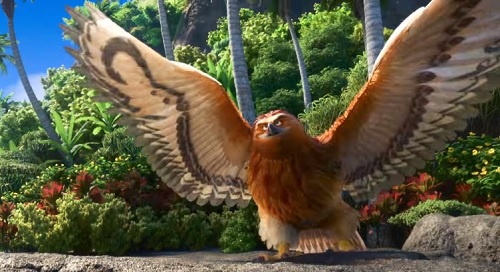 And he’s not the only god, obviously. There’s also a giant crab guy, a goddess named Te Fiti who is also a lush green mountain who likes to sleep, and a huge lava monster named Te Ka. Also, the ocean is alive.

So there are issues with the movie, at least on the surface. But like the ocean, there’s a lot beneath the surface.

4. Polytheism is no picnic. 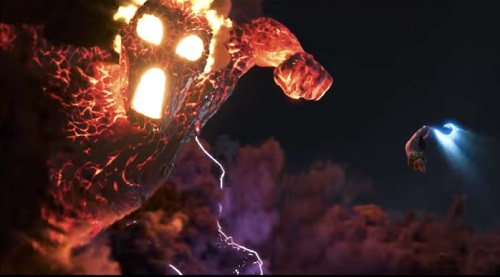 If one God is good, more gods should be better, right?

Not if you follow Greek legends. Those gods are always cranky about something.

In the prologue, Maui steals Te Fiti’s heart, which is small enough to fit on a necklace. Because when we steal something, it’s wrong, but when a god does it, it’s “mischievous”.

And these are the type of gods that need appeasing. Te Fiti is losing sleep over the whole thing, and every island in the area is getting infected by a general blackness that kills crops and drives away fish. Every island is just collateral damage. Including the one Moana lives on.

5. If you’re going to steal something, don’t then go and lose it.

Our actions have consequences, and sometimes they affect other people. You have to step up and make things right.

So basically, it’s one of those movies where two people who don’t get along go on a journey until they do. On a boat. With a chicken.

6. This boat isn’t big enough for the two of them. 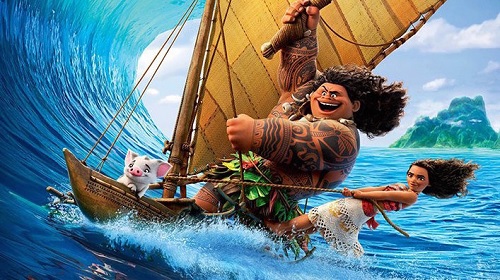 But that’s how these movies work. The only way it can be big enough is if the two learn to get along and stop singing songs about themselves.

7. Try to get along. Friends are important.

And Moana gets along with everybody, in general. She was the type of kid who could wander down to the ocean and make friends with it.

For the most part, she seems to be like every other Disney princess -- except that she has two parents, thank gods. She also looks out for everyone, including the village crazy lady who dances on the beach and happens to be her grandmother. When she sees a baby turtle trying to get to the ocean, she helps it. And she even has some amount of patience for Heihei, a rooster who is either mentally challenged or incredibly cross-eyed.

But now she’s 16, her island is starting to get infected, and her BFF, the ocean, wants her to take out a boat, find Maui and set things right. But she can’t leave the island. 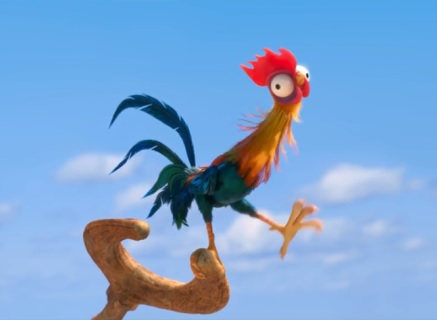 Her father is the chief of Motunui, where the citizens weave bananas into coconut baskets or whatever it is they do, and compose 16-year-long montage songs about how they love to live there. They might as well, because the law is that they can’t leave -- for safety reasons -- due to a bad sailing experience the chief had when he was younger.

Yet the ocean keeps calling to her. Should she go against her parents? What about the good of the village? And what if she suddenly finds out that her father has already broken tradition from HIS parents?

9. Know where you come from. 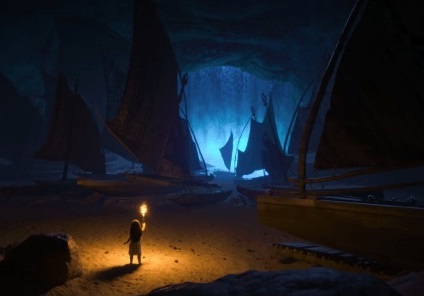 Thanks to her grandmother, Moana finds out that her ancestors were voyagers.

Also, her ancestors liked to sing. (That’s where she gets it from.) They even sang about voyaging while they were voyaging, so they wouldn’t forget.

“We set a course to find a brand new island everywhere we roam,” they sang. “Oy vey oy vey! We keep our island in our mind. And when it’s time to find home, we know the way.”

We can relate. We have a homeland that we keep in our minds, but we wander everywhere. Our ancestors were wanderers too. Besides for the 40 years in the desert, Abraham himself was a wanderer.

At least he didn’t sing.

Moana had an inner call to voyage out, which was apparently residually there from her ancestors. She needs to return to their ways to save her land. So she ventures out alone, besides for the chicken that accidentally stows away in her glove box and keeps trying to fall off the boat.

Her first step is to find Maui, whom she comes across pretty much by accident, because years of being helicopter-parented did not teach her how to sail a boat.

Maui had lost his hook and become stranded on an island for like a thousand years, to the point where he was so bored that he started talking to his tattoos.

Maui considers himself a hero for the various feats he did, and doesn’t realize that his actions had consequences. He has no need for this little girl and her demand that he get on her canoe.

11. Everyone needs companionship. What if there’s something in your ear?

Moana needs him to teach her how to navigate the ocean and not just find things by randomly crashing into them. And he needs her to learn to be a hero again. You scratch my back; I scratch yours. Even though Maui feels that if he needs to scratch his back, he already has a fish hook.

But the two don’t get along, because that’s how these things go.

12. There’s nowhere to go when you’re mad at someone on a tiny boat.

You kind of have to stay there and work out your differences and go where the other one wants to go. You’re all in the same boat.

Maui isn’t crazy about going, especially since he can’t easily return the heart because of the crazy volcano monster. Especially without his hook.

13. It’s what’s inside that counts. On the outside, you’re coconuts. 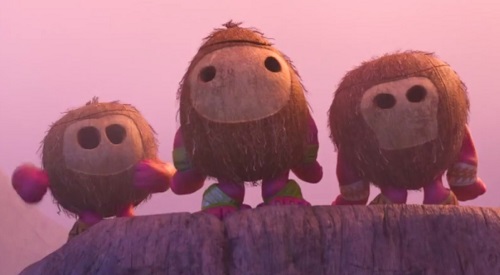 Maui has a tough outer shell. His powers are, for the most part, contained in his fish hook, and his entire life story is inked onto the outside of his body.

“And what does Moana have to offer?” he wonders. “She’s a princess!” According to ancient Disney tradition, princesses wait around to be saved.

“If you wear a dress and have an animal sidekick, you’re a princess,” he counters. In other words, you are one on the outside.

“No,” she says. “I’m the daughter of a chief.” In other words, a future chief. One with a sense of responsibility.

But when they finally fight the lava monster, Maui’s hook gets broken. And with that, he gives up.

And now it’s up to Moana to defeat Te Ka.

Well, Moana and her suicidal chicken.

What Moana figures out is that Te Ka actually IS Te Fiti, albeit with a temper and operating on zero sleep. So now all Moana has to do is remind Te Ka who she is on the inside. She can’t be defined by something someone did to her a thousand years ago.

Ultimately, the movie is about teshuva (returning). Moana needs to return to her roots, Maui needs to return what he stole, and Te Fiti needs to return to who she was before for Moana to even have a shot at fixing things. You can’t fix things when you’re angry. The other person can never make it right because your anger is blocking him. And throwing fireballs.

What does it mean to be chosen?

At the beginning of the movie, the ocean chooses Moana. Why? She has no idea. And the ocean won’t tell her.

“Why did you bring me here?” she asks in a fit of desperation. “I’m not the right person. You have to choose someone else.”

But it does crash her boat on the right island to find Maui and give her all the life experiences she needs to see the solution in the end. It’s back there, pulling all the strings.

But not everyone could get there on the same experiences. After all, Maui had them too.

“Maybe the ocean chose wrong,” he tells her.

Other gods. What do they know? 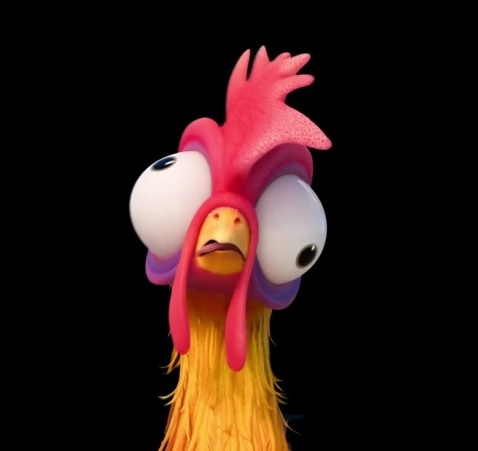 Moana has the empathy needed to figure out that Te Ka could be reasoned with. And the ocean figured this out when it saw how she helped the turtle. Moana’s strength lies beneath the surface.

Similarly, we Jews are descended from wanderers with vast amounts of empathy, and our strength lies below. Sometimes the world may seem like it’s against us, but we are always the culmination of our whole journey until this point, and we have a mission. We don’t always understand what God is doing, but he’s seen where we need to go and he’s steering us there. He’s the wind in our sails.

We are the daughter of the chief.

X-Men: Days of Future Past