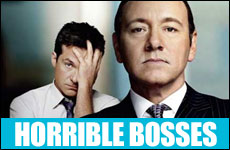 As bad as your boss may be, at least you have one…

A recent study found that 80% of all employees identified their bosses as lousy managers. The rest didn’t have time to respond to the survey during working hours, and there was no way we were going to survey them after working hours, because we do have a life outside of work, you know.

80% of all employees identified their bosses as lousy managers.

But maybe your boss thinks you don’t. Maybe he assigns you several tasks in an amount of time in which it’s mathematically impossible to complete those tasks. Maybe, when he assigns duties, you can pretty much hear him assigning blame:

Sometimes you feel like you just want to kill him.

I’m speaking metaphorically, of course. But this is the plot of the film Horrible Bosses. Horrible Bosses is about good people bumbling around trying to do bad things that they’re bad at to bad people. (“He has a peanut allergy; let’s put whole peanuts in his shampoo.”)

Of course, the bosses in this movie aren’t regular bosses. These are spectacularly evil people to begin with. Our heroes are faced with the choice of enduring them or being unemployed in today’s job market, so they decide to kill them. One character is a dental hygienist, though, so I don’t know what he would have to gain by killing the dentist he works for. Won’t this cause the entire practice to collapse? No one’s coming in just to get their teeth brushed.

There have always been bad bosses. Pharaoh, for example. For one thing, he was an anti-Semite. He also made everyone work 24/7 for 210 years, he didn’t give out recommendations, and then there was his horrible maternity plan. He showed up on the first day, pretending he was going to work with us, but then we never saw him again. And then one day he said, “From now on, you’re all going to make your own office supplies.” What was that about?

But then Moses came along. (He wasn’t the CEO, but he was our immediate supervisor.) He cared for the people, created new holidays, and fixed the water cooler at his own expense. He gave us credit when we did well and went to bat for us when we didn’t.

But some people kept complaining. They said, “I wish I had my old job. It was hard, but there was less travel involved. And I didn’t have a whole book of like 600 company rules.”

My point is that every boss seems like a bad boss. So objectively, it’s hard to tell.

(Now I’m not saying your employer is Moses even though he can squeeze water from a stone, he’s not great at public speaking, and sometimes it feels like he’s leading you in circles.)

Basically, a lot of us hate our bosses for the same reason we’re annoyed by our in-laws: We don’t always agree with them, but we can’t ignore what they say. They stick their noses into everything, and they somehow manage to ruin every single holiday.

But at least you have a boss. That’s better than the alternative.

I lost my job to the economy a few years ago. Unemployment checks kept coming, but those didn’t give me a job -- they were just giving me fish to go with my lemons. But for whatever reason, people like my writing enough that I’m able to somehow hustle a living from it. So I’m doing okay, although I’m kind of always hanging on by my fingernails, which isn’t easy, because I don’t have any fingernails, thanks to the stress of not having a job. It’s a vicious cycle, really.

But at least I don’t have a boss, right?

Yeah, that is nice. Of course, every client I deal with is kind of my boss, and I work basically every night and weekend. I can’t rest on past achievements, but I do have to work to fix past mistakes. And worst of all, I have no one to hate.

So here are some strategies for dealing with your boss, most of them gleaned from the movie. I’m not going to suggest killing anyone, because I assume here that you don’t work for Pharaoh, even if your boss might actually benefit from having 10 plagues visited upon him.

The last thing you want is for him to be right. At some point, your hard work will pay off…I think.

There is nothing more satisfying than complaining behind your boss’s back, so long as he’s not standing behind you at the time. So don’t do it at work. Make sure you have a group of friends – the movie recommends that there be a suave friend, a“regular” friend, and a friend who’s slightly socially off and who always ends up sitting in the back seat. Misery loves company, and it will make you feel better to talk to people with similar problems. The group will also help to put it in perspective and make sure that it’s actually the boss who’s the problem, and not you.

You could be 100% right, but if you tell your spouse what she’s doing wrong, all that will happen is she’ll tell you 10 things you’re doing wrong. The key here is to understand that, most of the time, your boss is not actually out to make your life miserable. He’s just stressed, and nothing makes you feel better when you’re stressed than passing that stress down to everyone around you. And you’re the one who keeps showing up and sitting outside his office all day.

The truth is, he might actually be horrible at being a boss. Not many people are hired off the street to be a boss. No one says, “Well, as a child I was always told I was “bossy”, so I probably have the makings of a good boss.” No; they’re hired to do something else, and they do that well, so they get promoted. It’s all about the Peter Principle, which says that, basically, as long as you’re good at what you do, you’ll keep getting promoted, and the minute you hit a position you’re not good at, you’re going to stop, and you’ll be stuck in that position for most of your career, getting increasingly frustrated at your employees, because you can do their jobs in your sleep, which is why you’re not allowed to do them anymore.

That said, schedule a meeting to talk to your boss, and make sure not to accuse him or get emotional in your arguments. It’s entirely possible that he’s aware that he can do better, but he can’t focus on it because: A. He didn’t take “bossing’ in college, and B. He’s busy getting flack from upper management about not doing as well as they did when they were in middle management.

If none of these techniques work, you should definitely drop subtle hints that you aren’t happy. Like you can see the movie a bunch of times and leave ticket stubs all over the office. Maybe then he’ll be more likely to take tips.

But whatever you do, do it professionally, because it’s a bad time to be unemployed. It’s a desert out there. I can attest to that.

Superman: The Mensch of Steel

Wisdom of Spider-Man
Near Death Experience Panel
The Western Wall: The Heart of the World
Ask the Right Question: Tisha B’Av
Comments
MOST POPULAR IN Jewlarious
Our privacy policy
Aish.com Is Looking for Great Writers