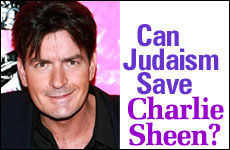 Charlie Sheen is now claiming that he’s Jewish. No we are not kidding.

When someone converts to Judaism, or newly identifies themselves as a Jew, it is generally perceived by the Jewish community as a positive thing, something to be celebrated. Yet when “Two and a Half Men” star Charlie Sheen recently identified himself as Jewish, the Jewish community began sitting shiva – they went into mourning. Okay, perhaps that’s a bit of an exaggeration, but the community did quite understandably greet this news with something less than jubilation.

The Jewish community wasn’t the only entity that’s been disappointed by Sheen. Production on his show was stopped in late January after top executives from CBS and Warner Bros. confronted Sheen about his private life. And Warner Bros. fired Sheen from his show on March 7th.

No one can accuse Charlie Sheen of hiding his private life. After all, Sheen has made no secret of embracing a, shall we say, “wild” lifestyle. Messy divorces, accusations of violence toward women and trips to hospitals and rehab have been staples of his life for over two decades. In the past few weeks, Sheen has been everywhere, coining catchphrases in TV sit-downs ("winning," "tiger blood," "Adonis DNA"), tweeting about his philosophies and live-streaming his life online.

In terms of his current relationship with the Jewish community, however -- last month, he lashed out at the Anti-Defamation League, which charged that Sheen exhibited “borderline anti-Semitism” in referring to his producer, Chuck Lorre, by his Hebrew name, Chaim Levine.

During a morning phone call to the Access Hollywood Live show March 4, Sheen told hosts Billy Bush and Kit Hoover, “My mom [actress Janet Templeton] is Jewish. Here’s where it gets confusing – we don’t know who her father was. But she is, in fact, Jewish. So, I guess that would make me Jewish, and my children Jewish. And Brooke [Mueller], my ex-wife, is Jewish. So, I guess I should have rolled that out, too.”

Has your head stopped spinning yet? Okay, let’s say that Charlie was doing some spin control and decided to identify himself as Jewish to take some of the heat off his accusations of anti-Semitism. And let’s say, for the sake of argument, that Charlie decided, for a change, to do the right thing and embrace his supposed Jewish faith. What would the upside be for him? Could it help his current situation? Could Judaism, in fact, save Charlie Sheen? I believe so. Here’s why:

The great 12th-century Rabbi Maimonides put together "13 Articles of Faith" that he believed every Jew ought to adhere to. These have been widely accepted as a proper expression of the Jewish faith and they still appear in Jewish prayer books today. Two of these Articles are “God knows the thoughts and deeds of men,” and “God will reward the good and punish the wicked.” Not bad starting points for Sheen, his conscience and his moral code, in his process of Judaic transformation – unless, of course, in his current state of mind, Sheen feels that he himself is good, his perceived enemies are evil, and God is totally in his corner and supportive of his every thought, deed and utterance. But with Charlie Sheen, that may sadly be the case.

A fundamental Jewish belief about human beings is that they are created in the image of God. Clearly, Sheen is ahead of the game here – he clearly considers himself divine. But the Jewish belief does not mean that we look like God, for God is incorporeal. The general rabbinical interpretation of this concept is that humans have the ability to reason. Of course, Sheen’s reasoning abilities may have been compromised a tad through his years of abusing his mind and body in various fashions. Still, according to this view, the yetzer tov is the moral conscience that reminds a person of God's law when one considers a specific action or choice. And this would be very valuable to Sheen, assuming that he doesn’t already consider himself to be God. Which again may sadly be the case.

But anyone who knows the Torah knows that it contains a lot of rules – 613 of them in fact, and anyone who knows Sheen knows that he likes breaking rules. So who knows, he may be better off with another religion. In fact, it wouldn’t be surprising if he’s already started his own religion – Sheenism, where religious services require a two-drink minimum.

Judaism is much more focused on actions than beliefs. What’s important is the mitzvot or commandments. And, of course, that’s where Charlie has his work cut out for him. The Torah and Talmud alike focus on the purpose of earthly life, which is to fulfill one's duties to God and one's fellow man. Succeeding at this brings reward, failing at it brings punishment. Whether rewards and punishments continue after death, or whether anything at all happens after death, is not as important. The punishments have obviously already started for Charlie, what with his being fired from his show, not to mention the harm and ill will he has caused his family, co-workers, and the American public.

If Sheen was to fully embrace Judaism, he would no doubt run across a little something called the Torah, Judaism's most important text, which contains stories and commandments that could teach Sheen even more about life and death than he already appears confident he knows. Perhaps there’d even be a twinge of guilt about having broken one or more of the Ten Commandments or the 613 mitzvot.

There is a story in the Talmud where the great rabbi Hillel was asked to sum up Judaism while standing on one foot. He replied: "Certainly! What is hateful to you, do not do to your neighbor. That is the Torah. The rest is commentary, now go and study." Hence, at its core, Judaism is concerned with the well-being of humanity. That’s the central message for Charlie Sheen, and one that might help him in his current situation.

In fact, the process of moving from self-concern to humanity-concern may have already started. Better sit down for this one. If he is to be believed, Charlie Sheen is now going to be focusing his “Tiger Blood” energy in one of the last places you'd expect: the ongoing Haitian relief effort. Speaking with "Access Hollywood" earlier this month, Sheen said that he and his friend Sean Penn were planning a trip to Haiti and that he wants to help focus the attention of the world back on the devastated Caribbean nation.

No, that’s not a joke. Sheen really said that and Penn confirmed it. Granted, the odds of Sheen’s possible success in turning his life around may seem insurmountable at this point. There are a lot of “ifs” to consider. If Sheen really wants to turn his life around; if he’s sincere in not wanting to hurt his friends, fans and family; if he might consider embracing at least the central precepts of Judaism and applying them to his life; then perhaps we might owe him another of the core concepts of Judaism – forgiveness. And then, for both Charlie and ourselves, that would indeed be, in his own words, “Winning!”

There are those who quite naturally doubt Sheen’s sincerity or motives for self-identifying as a Jew. But whatever those motives may be, one thing is clear – if Sheen does, for whatever reason, embrace Judaism, or at least its concepts, it will most definitely change him for the better and it may even save his life.

Alexander and the Jews
Deep Breaths
What Happened to the Truth?
The Japanese Everything Bagel Spice Recipe
Comments
MOST POPULAR IN Jewlarious
Our privacy policy