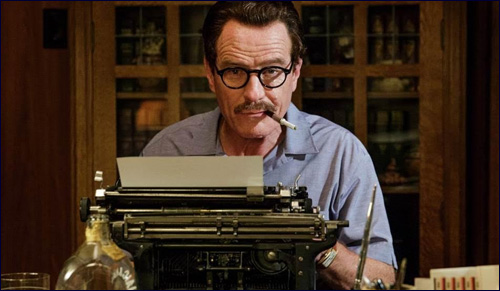 Working underground due to the infamous Hollywood blacklist didn’t prevent this writer from producing hit after hit.

From the time he began writing movie screenplays in 1935 till the time his career came to a temporary halt in 1947, Dalton Trumbo had become one of the most prolific and successful writers in Hollywood. His credits included “Thirty Seconds over Tokyo,” “Five Came Back,” “Curtain Call” and “Kitty Foyle,” for which he earned an Academy Award nomination. His anti-war novel, “Johnny Got His Gun” also won a National Book Award in 1939.

But Trumbo was tripped up by the anti-communist fever taking hold at that time. As the most famous of the “Hollywood 10,” – writers subpoenaed to testify in front of the U.S. House Committee on Un-American Activities (HUAC), he refused to answer their infamous question: “Are you now or have you ever been a member of the Communist Party?” For his defiance of the committee, including a refusal to name anyone else he knew who was a member of the Communist Party of the United States of America, Trumbo (as well as several other writers) was convicted of contempt of Congress. He served ten months in federal prison.

“Are you now or have you ever been a member of the Communist Party?”

The new biopic about this talented and prolific writer, Trumbo, stars Bryan Cranston and Diane Lane as Trumbo’s wife, Cleo. The movie focuses on the writer’s career during the 13 long years of the Hollywood blacklist when hundreds of writers and actors were accused of Communist party affiliation, their careers suddenly squelched by the Hollywood studios who felt they could not afford to alienate the public by hiring talent associated with “the red menace.” (The movie does not make a clear enough distinction that the blacklist was an unofficial creation of the studios; there was no governmental “blacklist.”)

After his release from prison, Trumbo sells his ranch and moves his family closer to Hollywood, where Trumbo’s career goes underground. Still very much in demand as a writing talent, Trumbo begins writing under pseudonyms, often at breakneck speed, to fill a growing roster of clients. In several scenes, Trumbo is tapping furiously away on a little typewriter on a raised table over his bathtub, as he chain smokes, sips Scotch and pops another amphetamine to ramp up his output, mostly for low-grade screenplays demanded by a couple of producers of cheesy entertainment. Having to work so much harder for so much less stresses the Trumbo marriage, as well as the writer’s relationship with his three children. Diane Lane’s Cleo is patient and supportive, eventually having to give her husband a lesson about what’s really important in life.

As the title cards read at the opening of the movie, “During the 1930’s, in response to the Great Depression and the rise of Fascism, thousands of Americans joined the Communist Party of the United States. After the U.S. allied with the Soviet Union during World War II, many more joined the S.P.U.S.A. . . Screenwriter Dalton Trumbo, a long-time champion of workers’ rights, became a member of the Party in 1943. But the Cold War cast a new light of suspicion on American Communists.” But unfortunately, Trumbo adds nothing to our understanding about why so many thousands of people did join the CPUSA at this time, nor does it recognize that many good people were concerned about the growing influence of Communist ideology in American society.

Trumbo and the other characters in the film tainted by Communist association are viewed as heroic from beginning to end. Those working to reveal communist influences are viewed as jingoistic, simplistic, anti-Semitic and sometimes felonious. (In some cases this was true: Trumbo runs into J. Parnell Thomas (James DuMont), the former chair of the HUAC committee, when both are in federal prison. “Now we’re in the same boat,” says Thomas, who was convicted of tax evasion.

“Except that you committed a crime and I didn’t,” Trumbo retorts. But this is not correct: the HUAC’s investigation may have been awful, but it was lawful.

John Wayne (David James Elliot)’s conservative politics are given a smackdown by Trumbo. In one scene Trumbo reminds him that he had worked as a war correspondent during the war while Wayne was “stationed on a film set, wearing makeup, shooting blanks.” In fact, Wayne had wanted desperately to serve, but was 34 at the time of Pearl Harbor and had a deferment due to both age and family status. He also toured U.S. bases and hospitals in the South Pacific in 1943 and 1944. This is another example of how slanted the movie is, how utterly lacking in context.

Helen Mirren is terrific as the publicity-loving, powerful Hollywood gossip columnist Hedda Hopper. She is not only obsessed by the idea of Communists in Hollywood and constantly threatening to “out” anyone in the industry who leans “red,” but is revealed as an anti-Semite as well. In a scene with Louis B. Mayer (Richard Portnow), who so far refuses to fire any talent suspected of Communist affiliations, she taunts him by calling him by his real name, Lazar, and tosses off the Yiddish names of other Jewish studio heads. Turning away from him, she asks, “What else can you expect from an industry run by kikes?”

Fears of Communism in the U.S. did become extreme, ruining many careers and perhaps even lives. Trumbo actively supported Hollywood unions (most of which had been organized by the CPUSA using alias names), and at one point, he bragged that certain anti-Communist books had not been made into films, including Arthur Koestler's classic Darkness at Noon and The Yogi and the Commissar; Victor Kravchenko's I Chose Freedom; and Bernard Clare by James T. Farrell, also author of Studs Lonigan.

Kirk Douglas’s courage to insist on giving Trumbo screen credit for “Spartacus” is widely credited with having finally broken the blacklist.

When Trumbo first joined the party, the ruthless nature of the Soviet regime was already well established. Yet there is not a single scene in which Trumbo and his colleagues or friends air second thoughts about their party ties, or about how they’d like to see American society evolve. The only nod to the irony of one of the richest screenwriters in Hollywood joining a political party whose goal would be to destroy the capitalist system that has enriched him is when one of his friends observes, “You talk like a radical but you live like a rich guy.”

And when Trumbo’s young daughter asks him to explain what it means to be a Communist, he explains it by asking her if she saw a classmate who was too poor to have brought a lunch, would she A) share her lunch or B) tell the kid to get a job. Presenting communism as simply warm-hearted liberalism is extremely dishonest.

Despite Trumbo’s having to work incognito, the seeds of his eventual return to the public begin, and this is where the movie begins to shine. In a delightful scene, he is watching the 1953 Academy Awards at home with his family, and presenter Kirk Douglas announces the award for Best Story to Ian McLellan Hunter, for “Roman Holiday.” Nobody knew that Trumbo was the real author. In fact, Trumbo won two Academy Awards for screenplays he had to write under pseudonyms. The second time was in 1956, when the Best Story award went to “Robert Rich,” for The Brave One.

More producers come to him to fix their ailing scripts, including Kirk Douglas (Dean O’Gorman) who comes to the Trumbo home in need of a script for “Spartacus.” Soon after, director Otto Preminger brings Trumbo the screenplay for “Exodus,” which also requires literary liberation. In these scenes, we are ready to watch Trumbo come back into the limelight and take credit for the work he actually wrote.

Douglas’s courage as executive producer to insist on giving Trumbo screen credit for “Spartacus” in 1960 is widely credited with having finally broken the blacklist. Once Douglas broke through, Preminger followed, with Trumbo getting screen credit for Exodus. With brave action, the blacklist was finally over.

Shtisel and Judaism: Three Themes in Season 3
Near Death Experience Panel
The Western Wall: The Heart of the World
Ask the Right Question: Tisha B’Av
Comments
MOST POPULAR IN Jewlarious
Our privacy policy
Aish.com Is Looking for Great Writers