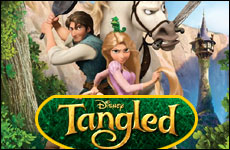 What would your life be like if you lived forever?

For the longest time, Walt Disney Studios made movies about princesses, and they were really good at it. There was a princess who had one parent or fewer, and a handsome prince would swing by and rescue her from whatever it is that plagues princesses – an evil queen, a wicked stepmother, or a French guy with a ponytail. But then Disney teamed up with Pixar, raised the bar, and Disney, on its own, hasn’t been able to make a really popular movie since.

But that hasn’t stopped them from trying to live on. In the past 15 years, they’ve made movies about bears and cows and they even produced a string of forgettable computer-animated movies, such as whachamacallit, and that one with the dog. And then they said, “Hey! Why don’t we just go back to making orphaned-princess movies?

Hence Tangled. Tangled is based on Rapunzel – the classic story of a girl who no one ever notices, because she’s locked in a tower, and then one day she lets down her hair, and it turns out there’s 70 feet of it.

But they had to add some story. Watching a girl sitting around a tower and waiting to be rescued is not an exciting way for audiences to spend an hour and a half. It would be like if Sleeping Beauty had spent her entire movie asleep.

Also, kids’ movies have to have a moral, and the only moral the original tale taught us was the benefits of not getting a haircut.

Plus, Disney had to answer a bunch of questions that were ignored by the original story, such as:

So they added a whole back story about someone named “Gothel”. Gothel, voiced by Donna Murphy, is a woman who doesn’t want to grow old. So she spends her entire youth looking for a magic flower that, if sung to, can heal all wounds and reverse aging. Kind of like Wolverine, if it were a musical.

It’s never clear what is going on in Gothel’s life that is so exciting that she wants to keep it going. But for hundreds of years, she uses the flower to keep herself alive, until one day the local queen has some pregnancy complications, and someone recommends the flower, which fortunately is covered by her health plan. So the king turns the entire kingdom upside down until he finds the flower, and the queen gives birth to a healthy baby named Rapunzel, who has way more hair than any baby I’ve ever seen. And as it turns out, her hair has inherited the power of the flower, although it loses that power once it’s cut.

So Gothel does the next logical thing, and kidnaps Rapunzel. She locks the child in a tower, safe from barbers and stylists, pretends to be the girl’s mother, and raises her through paranoia and believable mother-daughter squabbles.

“Great,” she says after one argument. “Now I’m the bad guy.”

Rapunzel thus grows up in the tower, entertaining herself mainly by brushing her hair, which has become an all-day thing. She also has time to make up songs, such as one titled, “When will my life begin?” She longs to leave the tower and see, up close, the parade of lights that appears in the sky every year on her birthday.

But Rapunzel’s life can’t begin, because Gothel doesn’t want her own to end.

“I’m not getting any younger here,” Gothel says impatiently at one point. Everybody wants to live forever, but nobody wants to grow old.

When people complain about getting old, someone always says, “It’s better than the alternative.” But what if there was a third option – kidnapping a child with magic hair that allows you to live forever?

Life is only worth anything because it’s finite.

But here’s the truth: Life is only worth anything because it’s finite. Nothing that is infinite has any real value. Imagine if someone tried to bottle water and sell it.

And besides, the older you get, the faster time moves. When you’re a kid, every school day seems like forever, but when you have kids of your own, you can’t believe it’s already the summer. By the time you’re ninety, time moves so fast that you seem to be moving in slow motion. And for someone like Methuselah, we’re guessing the last 500 years were a blur. Isn’t each day worth less when you have more of them?

Rapunzel wants nothing more than to leave the tower for one day – her birthday. But Gothel asks, “Didn’t you just have a birthday?” Birthdays mean nothing when you’re hundreds of years old. They’re only a big deal because they’re finite.

In the end, Gothel is so upset about getting old that she falls out the window. But is that really something to be upset about?

Society looks at old people as being outdated, like technology. Their memory is full, they move slowly, and they sometimes make strange noises when you’re waiting for them to boot up.

But in Jewish culture, people are worth more than that. The old are revered for the wisdom they offer. When you’re young, you don’t have as much wisdom, so G-d gives you looks (and virility) to make up for it.

Life is made up of stages, but people don’t want to move on to the next stage of anything. We stay in a low-paying job we hate because we’re afraid of what a new job will bring. At night, we postpone going to bed, but in the morning, we don’t want to get out of bed.

Age is nothing but a new stage. It’s not worse, it’s new. Being up is not worse than being in bed. You get to do things that you would never be able to do if you were asleep, all the while telling people, “I’m sorry, I’m still asleep.” It’s the best of both worlds.

Living forever isn’t all it’s cracked up to be. It’s not about how much time you have, but what you do with it. Rapunzel, who wants nothing more than to move on to the next stage of her life, does get to go out on her birthday, and in that one day, she meets her bashert, sees the big city, and convinces a tavern full of thugs to follow their dreams. And there’s one thug -- the oldest of the bunch -- who has a long white beard and no teeth and spends most of the movie wearing a diaper, and he’s always smiling. He definitely seems happier than Gothel.

Now isn’t this an ironic theme for Disney to bring up? If you spend too much time trying to hang on to the past, your future won't be worth much.

Defiance
Don’t Believe in Other Gods Versus God is One
Seeing Without Eyes
Why Shouldn’t We Eat Whatever We Want?
Comments
MOST POPULAR IN Jewlarious
Our privacy policy
Aish.com Is Looking for Great Writers