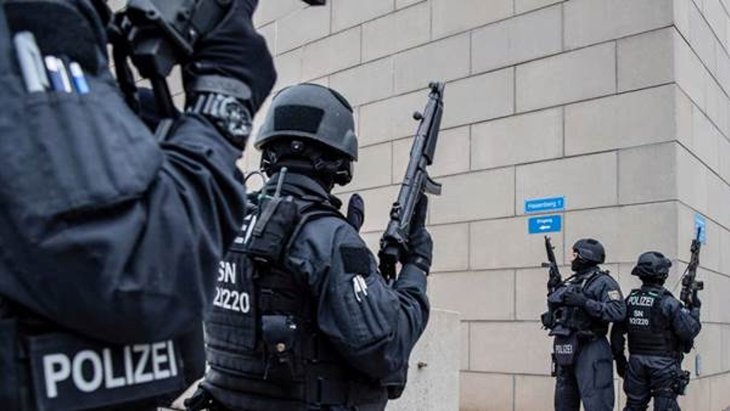 Living with danger and embracing a Jewish life.

What are you truly living for? What is worth the risk of living a Jewish life today?

The latest terror attack on a synagogue forces us all to ask that of ourselves. On Yom Kippur, the holiest day in the Jewish calendar, a murderer once again decided to attack a synagogue and inflict mass casualties on praying Jews.

The neo-Nazi murderer, whose name I won’t dignify by writing here, spent the morning of Yom Kippur in a now-familiar ritual, preparing his homemade arsenal and streaming his movements live on social media. He drove a short distance to a synagogue in the eastern German city of Halle, and delivered a rambling rant about Jews supposedly being “at the root of the problems” in Western societies before exiting his car, intent on killing Jews.

Thank God, he was thwarted by the synagogue’s heavy wooden doors which were bolted shut. He tried opening smaller doors, which were also locked, then started throwing home-made bombs over a wall into the synagogue’s property. Inside, congregants saw their would-be murderer try to break down the building’s doors on security cameras. After barricading the doors and calling the police, member Max Privorotski recounted to local journalists, the congregants continued to pray the Yom Kippur service, beseeching God for safety and life.

When the killer realized he wasn’t able to enter the synagogue, he shot a middle age woman walking by, killing her in cold blood. Still streaming his attack on social media, the killer drove a few streets away; spying a Turkish restaurant, he muttered that “would do”, and entered the store. A man inside the restaurant can be heard begging “No” before being shot to death.

This 35-minute murder spree was viewed thousands of times on social media before being taken down. Local police arrested the murderer and have said his attack shares hallmarks of other far-right attacks, including the rampage at the Tree of Life Synagogue in Pittsburgh which killed eleven people almost exactly a year earlier.

A few hours after the attack, I walked to my own synagogue for the Neila service, the last of five beautiful services on Yom Kippur. I hadn’t yet heard news of the terrible attack in Germany, but like Jews all around the world, I was already concerned about the threat of violence. A group of young boys played outside. Many of the boys were my son’s friends, and I briefly thought of going back home and telling my son he might want to come join them.

Then a familiar thought came to me: why risk it? Increasingly, evil people around the world view Jews as targets. Raging hatred has made it feel even more risky to be visibly Jewish than even a few years ago. I’ve had this thought over and over through the years. What if today’s the day for another attack? Will the roiling hate that fills the internet and some corners of the media spill out into real world violence, God forbid? Living a Jewish life now feels like a dangerous choice, our schools and synagogues need to be guarded like fortresses.

My daughter and I entered our shul and I felt ashamed I felt relief that my son was safe at home instead of playing in front of the synagogue, visible to all. I want my son to be part of a warm Jewish community. We make a statement every day that we are willing to live with the risks of being Jewish today in order to pass our precious Jewish heritage on to our children.

Just then, an alarm went off. Our shul’s state-of-the-art security system had been activated. As everyone implemented our prepared response, I stood there with my daughter, listening to crying children. An elderly woman had to be laboriously helped by two people. “Are we targets?” one woman whispered. I looked around at my community, and realized: Yes, we’re all targets. Thank God this was a false alarm, but the fact that Jews today have to go to extraordinary lengths to keep ourselves safe and still face danger every day means that we are all targets indeed.

Years ago I met Rabbi Noah Weinberg, the founder of Aish HaTorah in Jerusalem. He was one of the most profound thinkers I’d ever encountered, and one statement he made in particular has always stayed with me: “Until you know what you are willing to die for you have not yet begun to live.” It’s only when we know what we’re willing to feel risk for, whether family or community or Jewish life, that we understand what’s truly important to us, what guides us in life.

Standing in our synagogue with my arm around my daughter, gazing at my Jewish community all around me, I vividly knew what we all are willing to risk our lives for. I don’t mean to imply, God forbid, that any level of danger or violence is acceptable. The people who target Jews and others are vile murderers and we must do everything in our power to protect ourselves and thwart them. Yet continuing to live a proud Jewish life is the ultimate answer to the hatred others direct against us.

The horrific attack on the synagogue in Halle and on two innocent people nearby is another attack on all Jews, not only in Germany, but around the world. We have many responses to these tragic murders. We must pray for the victims of this rampage. We must do all we can to protect ourselves and safeguard our Jewish institutions. And we must never let the hatred and danger directed at us deter us from living Jewish life to the fullest.

We need to stand up to live proud Jewish lives. This Sukkot, as we dwell in our sukkah, our "shelter of faith", let's remember God's protection as we joyfully celebrate being Jewish. May 5780 bring Jews everywhere safety, security and peace.

Arson at the Delaware Chabad House

Why the Jews?
Were Adam and Eve Jewish?
How I Learned to Love the Multiverse
10 Big Jewish Inventions
Comments