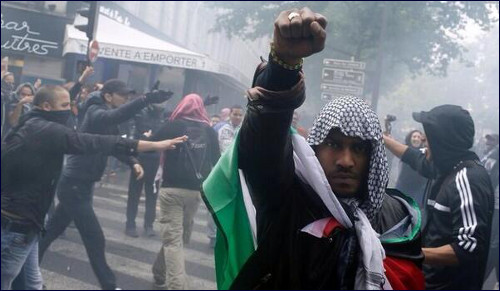 In the heart of Paris, calls to kill the Jews inflame a violent mob. An exclusive Aish.com interview.

“It was a meeting for peace – peace for the Israelis, and peace for the Arabs.” That’s how Monsieur Serge Benhaim described it in an exclusive interview with Aish.com.

President of the one of the largest synagogues in Europe, Monsieur Benhaim and his colleagues wanted to do something to help promote peace in the Middle East. They decided to hold a special community wide service at Synagogue Don Isaac Abravanel la Roquette in Paris.

Located in Paris’ fashionable 11th arrondissement, this Orthodox, Sephardic synagogue is a vibrant place. Hundreds of people throng its Shabbat services each week; many members are families with young children.

As the day of the prayer service approached, the mood in France darkened. Anti-Israel rallies were planned for Paris and the French city of Lille; some of the language being used to describe the events was violent.

“On Friday morning we also heard that there would be an anti-Israel rally nearby at the same time,” Monsieur Benhaim recalled. Ominously, the organizers were planning a march through central Paris, ending at the Synagogue Don Isaac Abravanel.

“I told the police it would be dangerous, and asked them to change their route or to shorten the Palestinian walk and finish the walk far away from our synagogue,” Monsieur Benhaim said. The police assured him there was no need to worry; they had the situation under control.

In the heart of Paris a speaker shouted “Death to the Jews!” then the Arabic call “Allah Akbar,” repeated by thousands of people.

Tensions continued to rise. Saturday night, a Molotov cocktail was thrown at a synagogue in the Paris suburb Aulnay sous Bois and two armed men were arrested as they approached the entrance of another synagogue in the 20th arrondissement of Paris. On Sunday, July 13, 2014 as the anti-Israel rally in the heart of Paris began, 8,000 Parisians flocked to hear denunciations of Jews and the Jewish state.

Jonathan Simon-Sellem, a French-Israeli journalist who was at the scene, wrote later that he couldn’t believe his ears. In the iconic heart of Paris, the Place de Bastille, a speaker stood at a microphone shouting “Death to the Jews!” then the Arabic call “Allah Akbar,” repeated by thousands of people. In nearby restaurants and cafes, Parisians observed the events without saying anything. The mob’s incendiary words went unchallenged. As the demonstrators moved through the streets of Paris, there were calls to kill Jews and to trash Jewish shops. A replica of a Hamas missile that hit an Israeli nursery was paraded and widely applauded by the crowd. 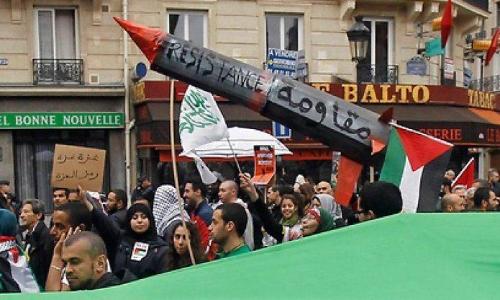 Meanwhile, in the nearby Synagogue Don Isaac Abravanel, hundreds of men and women, many with babies and children in tow, were streaming in for the peace service. Despite their nervousness at the nearby demonstration – and with renewed assurances from the French police – the synagogue organizers felt ready to start. In addition to the police presence, the Consistoire, France’s central Jewish communal organization, had lent the synagogue a dozen unarmed security guards for the day. They were supplemented by about 50 members of a Jewish youth group – also unarmed – who had volunteered to help defend the synagogue from any threats during the service.

“So we start our meeting – 400 people – women, children,” Monsieur Benhaim explained. As the congregants started praying for peace in Israel, the anti-Israel demonstrators were getting closer and more provocative. Minutes into the service, at 6pm, a battle broke out outside between demonstrators and police, a mere 300 meters from the synagogue.

Police stemmed the march, diverting it down a boulevard away from the synagogue. Then a mob of 1,000 protestors doubled back, marching on the synagogue. “We heard a big cry and ‘Allah Akbar’ by one thousand people,” Monsieur Benhaim said.

Congregants watched in horror as protestors – many armed with knives, axes and broken bottles - stormed the building.

Congregants watched in horror as protestors – many armed with knives, axes and broken bottles - stormed the building. The synagogue’s security guards rushed to keep out the intruders. For a few long moments, they fought alone; five sustained light injuries. Then they were relieved by police.

The battle outside raged for hours. Another nearby synagogue was pelted with stones. “So we closed the synagogue and we asked everybody to stay inside until everything would be okay,” Monsieur Benhaim said. He heard the mob outside “all the time singing ‘Allah Akbar’ and ‘Kill the Jews’ – if you can call that a song.” Congregants were particularly concerned that police secure a nearby metro station, to stop them being attacked as they and their families made their way home at night.

Cooped up in the synagogue for hours, the congregants turned their attention to the children, making their comfort and security their number one priority. Synagogue officials showed some short films about Israel; others led the children in song. People brought out toys and games, somebody found soft drinks. It wasn’t until 9:30pm, hours after the battle of the Synagogue Don Isaac Abravanel started, that police secured the area and congregants were finally allowed to leave the building and go home.

In the aftermath of the siege, France’s president and major ministers were quick to condemn the attack. France’s Interior Minister Manuel Valls denounced it “with the greatest force.” Police were posted at the synagogue the following day, Bastille Day in France. French officials rushed to assure France’s Jews that they will be protected. But after the siege of his synagogue – one of the major Jewish institutions in Europe - Monsieur Benhaim isn’t so sure. For him and many others, the attack on the Synagogue Don Isaac Abravanel is a turning point.

“People were really afraid. They didn’t dream of such a situation; people coming to a synagogue to fight and perhaps to kill people. The last time Jewish people have been endangered was the Second World War with the Germans…. A synagogue was something that was very respected; synagogues, cemeteries, schools or hospitals were something holy. This attack is something very new.”

Monsieur Benhaim believes that the politicians and police want to protect the Jewish community, but given the increasing threat and constant anti-Semitic harassment the community faces, they lack the resources. “Now we are afraid they are trying to kill us. Molotov cocktails. Toulouse two years ago (when a gunman shot dead three children and a father outside the Jewish school) . Every day we have a problem. Every day young people coming out of school are pushed and attacked.”

“I don’t wear a kippah in public any more. Nobody goes in the street in a kippah. We stopped two or three years ago. Now we wear a cap.”

As a community leader, Monsieur Benhaim has seen this phenomenon first-hand. “Before the question was ‘Do we have to go?’ Now the question is ‘When should we go?’” As a leader in the community his role is changing too. “Before Jewish leaders were talking about security, but now we’re talking about leaving. Before our job was thinking of ways of keeping Jews in France… But now some Jewish managers start to ask if our duty is not to prepare our community to leave France.”

Changing a Tire for a Stranger

Desperate for a Donor

Closing the Gap
The Blue Beyond
Great Place to Live
Is Eating Supposed To Be Spiritual?
Comments
MOST POPULAR IN Current Issues
Our privacy policy