Seven Ways You Can Help Israel 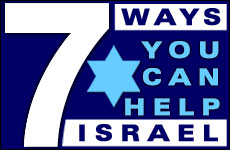 Israel needs your help. Here's what you can do.

A plane is about to land, and the pilot suddenly has a heart attack. The co-pilot takes over, but can't take the pressure and faints. With no time to spare, one of the hostesses grabs the microphone and screams "Can anyone fly a plane?"

A man gets up from Row 6 and says, "I can't fly a plane, but I'm willing to follow instructions from the control tower."

He rushes into the cabin, links up with the control tower, lands the plane safely and saves everyone on board. He becomes an international hero.

Airline pilots are not heroes. It's their job to land planes safely, but sometimes, in emergencies, they need the help of the simple passenger.

In Israel today, the army and the Government are doing their jobs. They're doing all they can.

But there is no guarantee they will land the plane safely.

They need your help...

Because every single Jew is on that plane called Israel...

They have been proven for almost 4,000 years:


Not as complicated as landing a plane, but immeasurably more effective.

Rabbi Elchonon Wasserman, one of the greatest Torah leaders in Eastern Europe during the Holocaust said this before he was murdered by the Nazis:
"In times of trouble, anyone who can strengthen themselves and doesn't transgresses the command of "standing by while your neighbor's blood is being spilt." Literally. Because every effort by every single Jew has the power to prevent bloodshed and save the Jewish people. And if someone has the capability and doesn't do anything, he's an accomplice to destruction, preventing the preservation and salvation of the Jewish people with his own hands."

Fellow Jews! Now is the time to follow instructions... (choose one, two, or however many you want -- they all work if done from the heart!)

Pray like you've never prayed before. Think of those poor soldiers caught in the hands of Hezbollah and Hamas terrorists...

Think of their mothers and fathers... yes, stop reading this now and think...imagine yourself in that position...

Think of the children and families shaking from fear in shelters in Sefad, in Haifa, in Nahariya... These are people like you and me, whose only ‘crime' is being Jewish...

Yes cry! There's nothing wrong with crying... and genuine tears can reach the Throne of Heaven!

And if you do, then dedicate your learning to Israel, take on something new every day, vow to focus more... something!

When Jews are attacked, when Jews are being killed, the entire Jewish people is under threat. Our history is full of it. When we stray from God we suffer and when we return to Him our fate improves. It's that simple.

Make God real in your life... Do what's right.

Who's gonna get us out of this?

Every Jew must surely realize we only have the Almighty to rely on... He's proven His belief in us for thousands of years... after all, the Jewish people are still here... He believes in you -- all you have to do is believe in Him...

Give, give, give... money, clothes, food for the soldiers... helping unfortunate families in your community... donating 10% of your income to a good cause... just do it!

Oh, and there's the seventh way you can help...

I, Pencil: The Movie
Seeing Without Eyes
Why Shouldn’t We Eat Whatever We Want?
The Power Of Prayer
Comments
MOST POPULAR IN Current Issues
Our privacy policy
Aish.com Is Looking for Great Writers