The Synagogue Attack: But It Couldn’t Happen Here 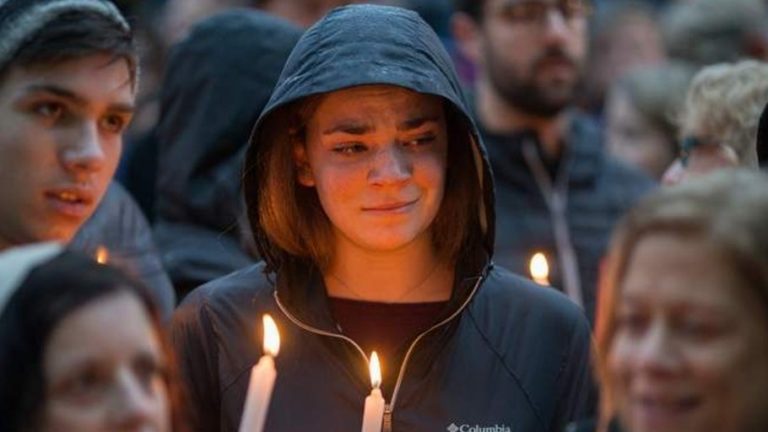 One of the deadliest attacks on Jews in the history of the United States has happened. It’s time to wake up.

The stench of anti-Semitism is thick in the air. And it stinks.

After the candle light vigils are over, the emotional speeches by politicians and community members given, the memorials and flowers left at the doors of devastation, we must ask ourselves, “Now what?”

I was born upon the ashes of the Holocaust. For years the stories of my grandparents, aunts, uncles and cousins were my story. My siblings and our children carried their holy names knowing that we have been gifted with life so that we may live for them. They perished in the gas chambers but we endured. We triumphed over the Nazis who wished to stomp us off the face of the earth.

Along with our names we carry an awesome responsibility. So we kindle our Shabbos candles for them, celebrate our holidays, study Torah, love our people and transmit a legacy to the next generation as they would have if they had survived.

With time, a complacency has set in. The years before my dear mother’s passing, she repeated the following lines to all who would listen:

“Listen to me. I’ve seen this before... The world is on fire and we are sleeping.”

“I know what I’m talking about, kinderlach. Listen to me. I’ve seen this before. I can’t be silent. We are getting a wake-up call. The world is on fire. So much is happening just like it did when I was a little girl. And we are sleeping. We are just sleeping.”

Some may have listened, others shrugged. Some said this didn’t seem to apply to them. None really thought that anything terrible could truly happen here in these glorious United States of America where freedom rings. Jews here are safe. We are comfortable. We are happy and prosperous. This is not Europe, after all.

But then one of the deadliest attacks on Jews in the history of the United States happened. We have arrived.

The day comes when things will never be the same. We wake up to the radiant sun and the sky is still blue but life is forever transformed.

My mother described the day she came home from school in March, 1944 and called out, “Mommy, I’m home!” There was silence. My mother, a first grader at the time, found her mother in the kitchen crying.

There was only silence. My mother’s heart began to pound. My grandmother stared at her little girl but couldn’t manage to utter a word.

“The evil Nazis have come. They want to kill us.”

My grandfather’s gentle voice called from the background. “Don’t tell the child such terrible things!”

But my grandmother was always known to cut to the truth. She responded, “There’s no sense in hiding the facts. She will have to find out sooner or later.”

The Nazi occupation of Szeged began.

One night a heated discussion took place in my grandparents’ home. A Jew had escaped from Poland and told grisly tales of Jews being gassed and thrown into burning ovens. No one believed it possible. This was still a country of culture, music, and art. The world was civilized. The man was probably insane.

October 27, 2018 – the massacre occurs in the Tree of Life synagogue as the shooter bursts into Shabbat morning services with an AR-15 style assault rifle and three handguns. A baby naming ceremony is taking place. The shooter shouts anti-Semitic slogans and begins firing.

11 Jews are slaughtered because they were Jews.

Anti-Semitic incidents rose 57 percent in 2017 with 1,986 documented events, and many of these increases were seen in high schools and college campuses. There is Jew-hatred, Israel hatred, boycotts and bashing of Israel while the world ignores travesties of justice taking place throughout the world. Students are afraid to identify themselves as Jews. There are open shouts and web posts calling for the killing of Jews.

This is not about gun control, security guards, self-defense courses or a discussion on politics. This is about our Jewish people and the future of our nation. It is about our children and our children’s children. Are we sleeping while history is happening before our very eyes?

“I am a different Jew today than I was yesterday. I hope that the Jew I am today will be stronger.”

Sophie Levin, a sophomore at Allderdice HS whose mother and grandparents attend the Tree of Life synagogue said that the mass shooting changed her. “Anti-Semitism was something that happened in history that happened in other places,” she said. “I am a different Jew today than I was yesterday. I hope that the Jew I am today will be stronger.”

Dear Sophie, I am speaking to you and to the young beautiful souls of your generation.

You are growing up in a world filled with hatred. Too many times there was silence when Jewish blood was spilled. The world is ready to say Kaddish for us, to create a memorial, to write us off in the history books. Our brothers and sisters in Israel are fighting for their very life each day. Bombings, massacres, stabbings, underground tunnels to kidnap us have become the norm. The U.N. debates our right to exist. Here in the U.S. it has become easy to shout virulent slogans against our people, saying, “We are not against Jews, it is Israel that we have a problem with.” A convenient way of saying, “We hate Jews.”

You say that you are a different Jew today and that you hope to be a stronger Jew. I applaud your words.

Here’s my hope. I hope that you know that being a stronger Jew means that you live with the faith of your bubbies and zaydies who walked before you. I hope that you forge the path ahead by knowing where you have come from. We are a nation that has survived destruction of our temples in Jerusalem, exile, pogroms, crusades, inquisition, gas chambers and savage terrorism. We have traveled the four corners of the earth; we are weary and yet the Jewish spark still burns within our hearts. It will never be extinguished. This is a promise from God, but it’s up to us to keep the flickering flame strong.

It is up to us, up to you and your generation, to define the strength that keeps the Jewish people going. It is the connection to our Torah and the timeless wisdom that lies within that is our oxygen. It is the love and lack of judgment between Jews that brings us to unity. No shooter asks which type of Jew you are.

May God watch over us all and grant us peace.

My Disturbing Visit to US Campuses

My Inspiring Uber Ride in LA