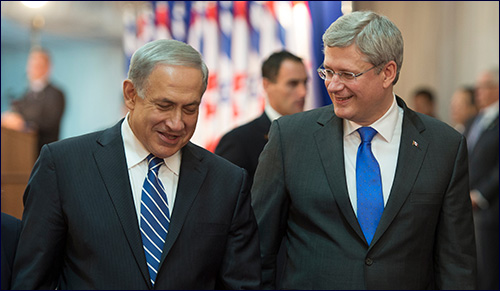 Curious why Canadian Prime Minister Stephen Harper is so supportive of the Jewish State? Here are some answers.

Canadian Prime Minister Stephen Harper has distinguished himself as Israel’s best friend on the international stage. His recent trip to Israel highlighted not only his close relationship with the Jewish state, but his close friendship with Prime Minister Benjamin Netanyahu.

Harper wants to create media stories about Canada that are not Rob Ford related.

Many commentators have wondered what the source is of this passionate support. It certainly isn’t political – there are far more Muslims in Canada than there are Jews. Some have speculated that it stems from the teachings of his father who was a veteran of World War II, while others point to his personal faith. Well we at Jewlarious have some ideas of our own and we thought we would share them with you.

The author is a Canadian and a Torontonian. He voted for Stephen Harper and Rob Ford.

An Interview with the Chief