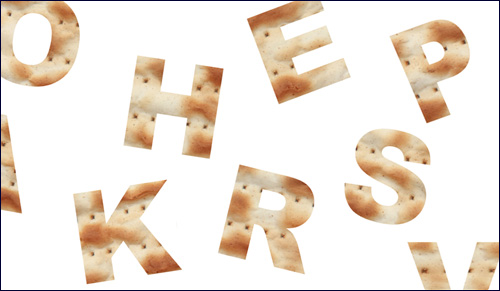 Afikomen Omen: Noun. The unfortunate curse of never being able to locate the hidden Matzah.

A Seder Sedater: Adj. One who tries to calm young children down when they become bored and hyperactive at the Passover table.

Yada-Yada Haggadah: Verb. Any family who Seinfeld’s their way through the Seder

Haggadah Prada: Proper Noun. A Fashionista who mistakes the Seder for a designer runway. Uncle Sol’s Visa bill is grateful that Aunt Sarah is such a Haggadah Prada.

PassOver the River and Thru the Woods, To Grandmother’s House We Go!” Noun. Title of the song gleeful children sing on the way to Bubbie’s Seder.

Gefilte-Dish: Noun. The opportunity before the Seder begins to dish about all the family gossip. Not to be confused with . . .

Gefilte-Wish: Verb. Praying that your family shouldn’t have to be such an acquired taste. (Usually occurs before introducing a new fiancé)

Manischewitzation – Noun. A general manifestation of everything from soup to sponge-cake originating from this Kosher for Passover product line. I ran out of time and couldn’t prepare a home-cooked Seder, but luckily the table still had that Manischewitzational glow.

Dayenu Die-Out: Verb. The tendency to lower your singing volume to a muffled mumble when the familiar chorus departs into the trickier second verse, only to have your voice Delightfully Dayenu Dominate when the highly recognizable refrain returns.

Exodus Exerciser: Adj. One who uses Passover (and the lack of carbs) to jumpstart their summer fitness routine.

The Shady Shank Shuffle: Verb. Sneaky little dance maneuver the hostess does when she realizes she neglected to roast the lamb bone for the ceremonial Seder plate and substitutes a dried out chicken leg instead. Can also be called Shawshank Redemption.

Afikomen Omen: Noun. The unfortunate curse of never being able to locate the hidden Matzah.

Bitter Herb: Proper Noun. Nickname for any resentful relative named Herbert. After their divorce, Bitter Herb still showed up at our Seder.

Theology Theatrics: Pl. Noun. The act of utilizing props (ping-pong balls symbolizing hail, red food coloring in water as blood, etc.) and costumes (dressing up as Elijah) to lend some entertainment to our ancestors’ story.

S.O.S.: Acronym. Splitting Of Seams. But the real miracle is when your pants don’t totally burst after second night Seder.

A Maror Borer: Proper Noun. Incessantly talking about the first time you gobbled bitter herbs, not knowing it was actually horseradish. We get it….steam came out of your ears!

PassOver The Rainbow: Verb. When Dorothy meets Miriam, Aaron, and Moses, she guesses she isn't in Oz anymore.

GefilteGuffaws: Verb. Holier than thou guests might do this if they glimpse you removing your store-bought bland chopped fish from a big jar.

Haggadah-Hassle-Haggle: Verb. Occurs when the disorganized (or lazy!) host sets the table with four different kinds of haggadahs, resulting in desperate cries of “what page are we on?” Surely there is no greater Seder shame than being lost when called upon to read aloud.

The Ten Condemnandments: Pl Noun. Those who condemn and criticize the Charlton Heston movie as being historically inaccurate.

Locate-a-(Seder)Plate: Just a cute game I invented to coax my kids into searching for our family heirloom platter which is buried somewhere in our Jewish cabinet. I pitch it as an opportunity to sharpen their afikomen detective skills and so far they buy that.

A TearjerkerShirker: Proper Noun. Someone who stubbornly refuses to dip their parsley into the salt water, claiming their doctor advised them to lower their blood pressure. How much sodium can tears of enslavement contain?

Matzah Monsoon: Noun. A glimpse of the upcoming week inside your child’s lunchbox. (If you run out of sandwich ideas, don’t go to Google.com, instead try the new search engine – Kugel.com!)

Yada-Yada Haggadah: Verb. Any family who Seinfeld’s their way through the Seder to appease growling stomachs.

BrisketerFix-iter: Adv. The cocky act of giving unsolicited advice to an inexperienced hostess, which results in a moister main course. Usually involves adding a secret ingredient (warm water?) to the pan drippings.

The FourSonsScorePuns: Verb. There’s always a comedienne in the bunch when quoting The Wicked Son.

The Dayenu Diet: Noun. A Weight Watcher approved eating program with the gentle motto, “That should have been enough!”

The Forty Questions: Noun. Incessant inquiries the youngest child makes the next day, i.e. "Why did Uncle Morty drink so much wine?" or "Why wasn't grandma talking to grandpa?" Huh? Huh? Huh??"

Afikomen Affidavit: Noun. An explicit legal form elderly grandparents have notarized so nobody forgets where they hid the matzah. Zayde signs the Afikomen Affidavit so after an hour of searching, he will be able to retrieve it safely from the cabinet where he keeps his dentures.

Afikoaffluency: Adj. A rich Uncle who makes finding the Afikomen so worthwhile, even adults hunt for it.

Exodus For The Rest Of Us: Verb. A mass exiting, wherein everyone’s extreme disappointment over glimpsing their umpteenth coconut macaroon translates into, “Let’s get outa here already!” They dream of visiting . . .

Leaven Heaven: Noun. The place where all delicious and real desserts ascend to during Pesach.

Put Me In Coach!