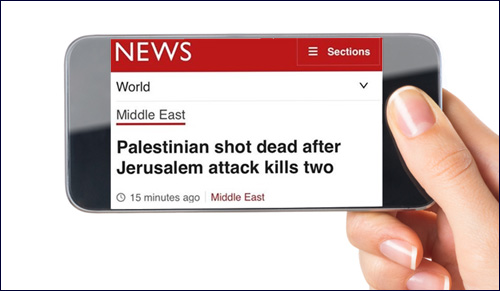 The Palestinians have launched a new brutal wave of terrorism directed at Israelis and this time the tactic of choice appears to be stabbing attacks. Scores of Israelis have tragically been murdered and as of yet there appears to be no end in sight. As usual, the Palestinians have found willing accomplices in their new terror war: the world media.

One would think that reporting a story about a Palestinian terrorist who begins stabbing innocent Israelis and then is shot by Israeli police should be relatively straightforward. We’re no Associated Press, but how about “Knife Wielding Palestinian Stabs Israeli Bystander; Police Shoot Attacker.” If only it were so easy.

Media outlets around the world are distorting the truth in the current conflict to outlandish proportions. Take a recent October 15th, story in the LA Times for example. The article was reporting a few incidents in one day where Palestinian terrorists stabbed Israeli civilians and police officers. The headline read, “Four Palestinians Killed in Israeli Violence.”

Thankfully there are media watchdog organizations that are doing their best to hold media outlets accountable for such outrageous reporting.

But this got us thinking. What would newspaper headlines look like if the same lack of context, distorted worldview and outright misreporting that are used when reporting the Israeli-Palestinian conflict were applied to reporting other historical events. Here’s our take.

1. May 2, 2011 – Americans Kill Saudi Father While Asleep in His House with Wife and Children in Abbottabad, Pakistan

The Lost Art of Babysitting