Which Tribe Do You Belong To?

by Gila Manolson and Nir Menussi 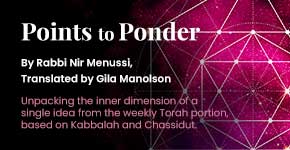 One of the most captivating topics in psychology is that of personality types. That each of us is different and unique, we know. That we’re all human, governed by the same basic psychological laws, we also know. But could there also be a middle ground between our universal humanity and our specific individuality? Some level to our identity which tells us what kind of person we are?

This is where the theories of personality types come in, assigning us to distinct psychological groups – virtual "soul families," each with its own set of characteristics. Thus, for example, you may be a “leader,” an “adventurer,” an "analyzer," and so on. One approach divides us into four types, another into sixteen, and yet others into other numbers. These theories can be seen as modern incarnations of ancient systems such as astrology, which divides us into groups according to our zodiac sign, and on that basis makes assertions about our nature, purpose, and even fate.

In the Torah, too, we find the concept of personality types. It’s found in this week’s Torah portion, the last in the book of Genesis.

Light through a Prism

Genesis is called the “Book of the Patriarchs,” so it’s not surprising that it concludes with the death of the third Patriarch, Jacob/Israel, and the blessings he gives his sons.

With Jacob, nascent Judaism advances a level: While Abraham and Isaac each had only one son fit to follow in their footsteps, Jacob is unique in that “his bed is complete” – he leaves the world surrounded by a dozen sons who all swear to continue his legacy, each one going on to found one the Twelves Tribes of Israel (or in Joseph’s case, two tribes).

Two new things happen here: First, there are now several sons following in their father’s path; and second, all sons are included. The Divine covenant, originally revealed only to Abraham, begins to branch out, and, like a sunbeam passing through a stained-glass window, break into different colored beams. Yet no light particle is lost: All hues complete each other and join together to create a higher unity – a whole that is greater than the sum of its parts.

This fact is reflected in the fact that Jacob is careful about giving each and every son a blessing that will strengthen him. Even Simon and Levi’s blessings, which sound like curses, have always been interpreted in a positive light (and indeed, later on in history, both these sons become important tribes, with Moses, Aaron, and Miriam, as well as the entire dynasty of Levites and priests, coming from Levi).

In thus blessing his sons, Jacob rectifies having given a “coat of stripes” only to his most beloved son, Joseph, which aroused the jealousy of the brothers. One commentary describes the coat as having different colored stripes. According to this, we can say that, in the beginning, Jacob bequeathed all his “colors” to Joseph (and therefore all the brothers’ sheaves bowed down to his in his dream), but now he realizes that every child must receive his own individual 'color'.

The blessings aren’t equal in length: Judah and Joseph each receive five long verses; Gad, Asher, and Naftali are each given one short verse; and Shimon and Levi share one blessing. The blessings are equal, not quantitatively, but qualitatively – each son receives exactly the right words for him to be able to realize his mission and purpose.

Connecting the Child to His Tribe

Later in Jewish history, ten of the twelve tribes broke away and ended up scattered among the nations. Virtually all Jews today are descended either from the tribe of Judah or that of Benjamin. But an important midrash explains that, spiritually, each of the blessings given by Jacob applies to all of the tribes, and therefore to all of us.

It’s written (Genesis 49:28) “And he blessed them,” so why does it say immediately afterwards “each one was blessed with his own blessing”? [This seems to be redundant. Answer:] Jacob went back and included them all together… to fulfill what was said, “All of you is beautiful, my beloved, and you have no blemish” (Song of Songs ).

Two points emerge from this idea: First, each of us has within us an aspect of every tribe; and second, each of us may be connected to one specific tribe and be its spiritual “child.”

This concept underlies an entire topic in Kabbalah, originating in Sefer Yetzirah, according to which the twelve tribes correspond to the twelve months of the year and also to twelve “senses” – unique spiritual abilities that shine or are strengthened during these months. Each one of us is therefore connected to the tribe and sense associated with our month of birth. In other words, there are twelve (or with Joseph's sons, thirteen) Jewish personality types, that each one of us belong to one of them, and to whom we can all connect during the yearly cycle.

This concept also imparts an important and deep principle in educating children. We all know the verse in Proverbs, “He who spares the rod hates his son.” On a simple level, this means that one who refuses to punish his child in fact hurts him. But Chassidism suggested an additional, original interpretation. The Hebrew word for “rod,” shevet, also means “tribe.” According to this, the verse can be read as saying that he who spares – i.e. prevents – his child from connecting to his or her soul tribe hurts his child!

(We could say that the literal meaning of the verse refers to the external aspect of education, whereas the Chassidic interpretation refers to its internal aspect – connecting each child to his or her spiritual root.)

Point to Ponder: Each person belongs to a particular family of souls, a spiritual tribe. Our self-realization very much depends on identifying our tribe and connecting with it. But our spiritual tribe isn't necessarily that of all of our children. When raising our child, we need to ask ourselves what their spiritual root is, and how to best facilitate their bond with it.

For those interested, the following chart illustrates the connections between the tribes, months, and senses (starting from Nissan, defined as the first month of the year):

Clarification: The idea that you are connected to the sense and tribe associated with your month of birth isn’t graven in stone. If you feel more connected to a different sense, maybe that’s your tribe. What’s important to remember is that all of us are included within all the tribes and senses – ”All of you is beautiful, my beloved.”

Nir Menussi is an author, public speaker and teacher. He has written and edited several books on Kabbalah and Hassidut, and lectures widely in Israel and abroad. His work is characterized by its unique combination of scholarly knowledge, psychological depth, and clear, lucid explanations. He lives with his family in Israel.

Who's Running the Show?
Blessing on Chewing Gum
Was Rahab a Prostitute?
Extras In Our Own Epic
Comments
More Articles on Vayechi
MOST POPULAR AT Aish.com
Baked Brik Recipe
Our privacy policy