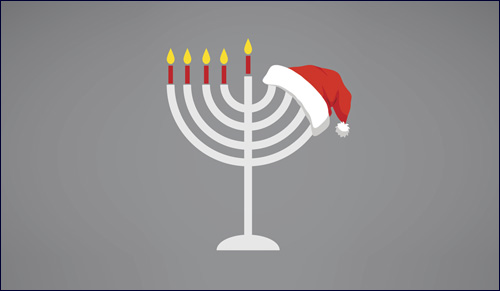 Jews differ with Christians on many critical points of theology, but we can focus on the threat we equally face for our survival.

I got a very interesting call the other day. It was a reporter for USA Today, concerning an article about Christmas and Hanukkah falling out on the same day.

Christmas, he said, has a fixed date -- December 25. Why does Hanukkah move around to different days, from Thanksgiving Day to late in December?

It was simple enough for me to explain to him that whereas our secular calendar is solar, consisting of a fixed 365 days a year (with the occasional additional of one day during a leap year to adjust the reality of the annual journey of the earth around the sun), the Hebrew calendar is based on the cycle of the moon. But because a moon year of 12 months only has 354 days and would cause our holidays to move from season to season, an adjustment was made to insert a leap month seven out of nineteen years in order to maintain the necessary correspondence between the moon calendar and the solar reality (and to ensure that Passover always falls out during the spring).

So that’s why Hanukkah can be as early as Thanksgiving or as late as Christmas. Jews observe a combination lunar /solar calendar unlike the Christian one which is totally solar or the Muslim one which is completely lunar, with its possibility for the observance of Ramadan possible in every season of the year.

The reporter thanked me and then pressed on with a final fascinating question: Since Christmas actually falling out during Hanukkah is quite rare, having happened only four times in the past 100 years, could you attribute any special meaning or significance to it? Is there a message implicit in two major faiths celebrating their religious traditions at the very same time?

Perhaps precisely because Christians and Jews both share a major moment for spiritual reflection, we might together focus on the contemporary threat we equally face for our survival.

The Hanukkah miracle is not about a military victory. The battle was not between competing armies fought over territory. It was a struggle between two competing ideologies, a clash of cultures whose goal was nothing less than determining the direction of civilization. Was the world to be dominated by the secular outlook of the Greeks, with its emphasis on the body and its pleasures, or would the Jewish stress on spiritual perfection and the soul become the defining measure of human kind?

The Maccabees did more than fight for the cause of their own religious freedom. It was not merely so that Jews could again worship in their temple, be able to observe their Sabbath, or circumcise their male children in accord with their religious precepts. It was so that the spirit of Hellenism not overwhelm the truths of Judaism. It was so that the voice of the soul would not be silenced by those whose sole delight was the cries coming from the Olympic amphitheater.

Oil refuses to be dissolved with other liquids; it does not lose its identity when mixed with water.

What was at stake in the story of Hanukkah was the survival of the very idea of holiness. Judaism taught that the purpose of life is that life must have a purpose. Hellenism preached that life has no purpose – so the only thing that is left is for human beings to “eat, drink and be merry – for tomorrow you will die.”

It is interesting that oil became the symbol of the Hanukkah miracle. Oil has a feature. It refuses to be dissolved with other liquids; it does not lose its identity, as other liquids do, when mixed with water. Just like the heroes of the Hanukkah story, oil does not “assimilate” but preserves its essence and rises to the top. More interesting still, the word for oil in Hebrew – Hashemen – when its letters become transposed becomes the Hebrew word neshamah, soul.

Jews differ with Christians on many points of theology. We do not agree on crucial issues, on the identity of God and the idea of the Messiah. But we do agree that we are bound by a commitment to morality, to a life of meaning and of purpose.

In an age when the secular spirit of Hellenism again threatens the spiritual sources of human survival it is good to be reminded that this year we can, at least for a short time in December, mutually celebrate life's meaning and purpose.

If There's Anything I Can Do

Thank You, Ma’am: A Personal Letter to the Queen
The 21st President of the United States: Failure or Inspiration?
Hiding Their Jewishness
The Jewish Pope: Following the Questions Home
Comments