What to Tell your Kids about Santa 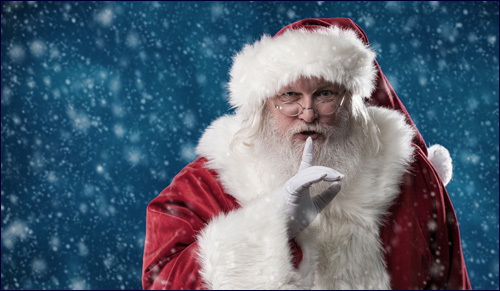 Let's go all traditional on this and use the time-held traditions of our people: sarcasm, inquiry, concern and knowledge (SICK).

Do I really want my little boy to think he's being ignored by a red-clad white-bearded fellow handing out puppies and ponies, iPads and iPhones and iWatches with abandon to everyone but him?

Over my dead, well-intentioned, Jewish-mother body will he wind up on a couch talking to different white-bearded sort over this Christmas mishegos.

On the other hand, not everyone in the neighborhood is a member of the tribe. Do I need phone calls from Mrs. Fitzpatrick, Mrs. Martinelli and Mrs. Drumpf shrieking that my brilliant son callously ruined their son's Christmas by telling him that Santa is not real?

I get it. I really do. When my son caught his father putting "tooth fairy" money under his pillow, I did what any self-respecting mother would do. I screamed at my husband not to take the kid's tooth fairy money. The kid never looked at his father the same way, but believed in the tooth fairy for years, (until he watched the Tooth Fairy movie with "The Rock" and wasn't buying it anymore).

Look, I have a heart. Just because I have to listen to that music everywhere I go and am blinded by the light at every turn doesn't mean I want to see any kid disillusioned. But does it have to be at a cost to my own kid?

The way I see it, we're in a bind. If we tell the kid the truth, he'll likely-at some point-blab. Guilt, phone calls, etc. If we say there is a Santa Claus but he only visits the goyim, we instill a permanent feeling of otherness and FOMO. Even if we say "But you get 8 presents and they get underwear."

What is the answer? Early movements for a Hanukkah Harry went nowhere. Inviting Santa in to a Hanukkah Bush proved a non-starter as well.

My radical solution is this. Let's go all traditional on this and use the time held traditions of our people – sarcasm, inquiry, concern and knowledge (SICK).

When he asks "Is Santa Clause real?":

Judi Zirin-Hyman has been a lawyer and has taught law to undergraduates, is a mother of twins who are college freshman and an eight year old who misses them, and is at work on her first novel – a contemporary lighthearted take on Tolstoy’s Anna Karenina. And she will share her favorite Hannukkah recipe, which her family has dubbed “Heart Attack on a Plate”, if you are very very nice to her.