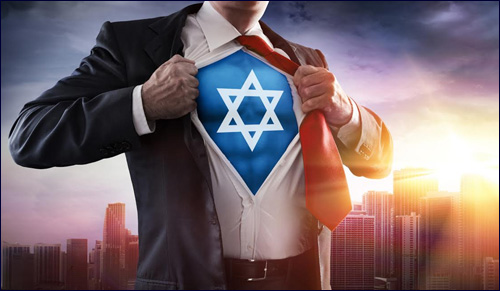 Move over Wonder Woman, there are some new Jewish Superheroes in town.

The popularity of superhero movies has proven empowering to a global audience. But just as TV today is “narrowcasting” to an increasing extent – that is, targeting specific niche groups with its programming, it can’t be too much longer before superhero movies start doing the same thing. In fact, as just one example, I predict that one day in the future, film students will be studying the genre of Jewish Superhero Movies. With the success of the Israeli Gal Gadot starring as "Wonder Woman", here is a selective survey of how other superheroes might look if they were produced with a substantially more Jewish orientation.

Supermensch was born Shmu-El on the planet Gornisht, before being rocketed to Earth as an infant by his doctor father Mo-Hel, moments before Gornisht’s destruction. Discovered and adopted by a Miami condominium sales couple, the child is raised as Chaim Leibowitz. Very early on, he starts to display various superhuman abilities which, upon reaching maturity, he resolves to use for the benefit of humanity through a “Supermensch” identity. Supermensch lives and works in the fictional American city, New Jerusalem. As Chaim Leibowitz, he is a journalist for the Daily Kreplach, a New Jerusalem newspaper. His love interest is Rivka Tannenbaum, and his archenemy is the, supervillain, Moe Schwartz.

Vonder Vomun was sculpted from chopped liver by her mother, Queen Maven and given life by the Goddess Grois-Halter, along with superhuman powers as gifts by the Hashem. Vonder Vomun’s training helped to develop a wide range of extraordinary skills in tactics, hunting and interior decorating. She possesses an arsenal of advanced technology including the Dreidel of Truth, a pair of indestructible phylacteries, a yarmulke which serves as a projectile, and other items I am not permitted to reveal. Vonder Vomun has a formidable cast of enemies bent on destroying her, such as Doctor Kreplach, the Accountant Assassin, Former Goyfriend, and Exploding Dreidel Maker.

Spider Macher is an orphan named Mendel Feinblatt, being raised by his Aunt Shirley and Uncle Chaim. He’s a teenager, having to deal with the normal struggles of adolescence and Hebrew high school, in addition to those as a costumed crime-fighter and part-time bar mitzvah tutor. As Aunt Shirley has never quite mastered her sewing skills, Spider Macher’s costume never quite fits right. Still, his super strength and agility have given him the ability to cling to synagogues and occasional JDates, shoot spider webs from his wrist-mounted web shooters in the shape of Stars of David, and react to danger quickly with his “spider-guilt”, enabling him to never enjoy the moment since he’s always alert to any danger for which his help might be needed.

Morris Rosenstein, a brilliant proctologist with a cloudy past about his family, is involved in an accident in his underinsured laboratory, causing him to become exposed to some gamma radiation and the unwanted affection from his physician’s assistant, Devorah Menorah. Morris discovers that since the accident, whenever Devorah comes on to him, he transforms into a giant tasty hamantaschen, with the result that everyone he meets wants to eat him. To distract himself from Devorah’s seductive ways, Morris takes on the persona of The Julk, and throws all his energy into fighting crime as well as building a security wall around New York and making Mexico pay for it. The Julk eventually convinces his mother to let him purchase a professional –looking costume, which so transform his look that he is asked to be on the cover of Better Homes & Superheroes Magazine.

At long last, Iron Man meets his match with a Superhero who initially starts out as his enemy: Iron Anne, so named because of the powered suit of armor she’s created for herself in the shape of a clothing iron, which conceals her true identity: Freida Blumenthal. Blumenthal is an inventive genius whose expertise in the fields of mathematics, physics, chemistry, and computer science makes Albert Einstein look like Jerry Lewis. Her powers include: repulsor rays that are fired from the spray openings of the iron, pulse bolts emitted from the self-cleaning area, an electromagnetic pulse generator activated by the Cotton setting, sonic blasts emitted from the Nylon and Rayon settings, and freeze beams Linen setting. If all else fails, Iron Anne has mastered the art of Ironing Board Throwing and has actually decapitated dozens of enemies in this fashion. Oh, and she’s currently single and is listed on JDate under a pseudonym I am unable to reveal for security reasons.

Batmanowitz’s secret identity is Moishe Schulstein, a wealthy American cardiologist, attorney, professor, governor, professional weight lifter, Green Beret, and owner of Schulstein Enterprises, a string of tallit factories on the East and West coasts. After witnessing, as a child, his parents being forced to listen to the music of Wayne Newton, Schulstein swore vengeance against criminals, an oath tempered by a sense of justice and periodic prostate problems. He trains himself physically and intellectually, and gives up fried food, sugar, and that Hawaiian shirt-wearing cashier at Trader Joe’s who keeps asking him, “What’s a hot Jew like you doing in a dump like this?” Batmanowitz is assisted by his butler, Yitzhak, Police Commissioner Dorfman, and the Boy Wonder – Sparrow. Though Batmanowtiz has no superpowers, he is able to succeed merely by judicious use of his genius intellect, physical prowess, martial arts abilities, detective skills, science and technology, vast wealth, intimidation, and indomitable will. If none of that works, he resorts to what Wolverinowitz confided was a sure-fire technique: weeping while begging for mercy.

Wolverinestein is a Jewish mutant (or “Jewtant”) who possesses animal-keen senses, enhanced physical capabilities, powerful regenerative ability, and three retractable bone claws in each hand. In other words, he really stands out in the synagogue. He is depicted variously as a member of the X-Men, Alpha Flight, the Avengers, and the Temple Beth Kodesh Men’s Poker Group. His brooding nature and willingness to use deadly force, and desire for matzoh brei mark him as a being described by Jewish actress Roseanne Barr as, “Probably my ideal man… Do you know if he’s single?”

Have We Gone to the Dogs?
It Takes A Lot Of Faith To Be An Atheist
How Instagram Brought Back This Nostalgic Soup
What Makes Eli Run?
Comments
MOST POPULAR IN Jewlarious
Our privacy policy