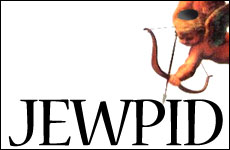 It's time for the Jewish people to bring some love into the world... by converting cupid.

We've all heard doomsday statistics of high divorce rates or the declining odds of finding a mate with increasing age. Singles jump from one relationship to another in an endless search for their beshert. Yet, the sought-after chemistry, that zing-thing that is falling in love, often remains elusive. Granted, many find happy and enduring relationships, but for many others, romance, like the economy, is in a recession. I decided it was time to get to the root of the problem. Go straight to the source. That's right—Cupid, the Prince of Love.

For many, romance, like the economy, is in a recession.

It wasn't easy, but I found him. While I can't reveal my sources or certain specifics, I can say he's hiding in a slum apartment in New York City. He'd taken a sabbatical which led to an extended leave of absence. In other words, no one's steering the love boat. Pretty much a recluse, Cupid was good enough to grant an interview to yours truly with the condition that I take no photos.

He answered the door wearing a tattered bathrobe, chomping on a cigar, and sporting chin stubble. His apartment was a mirror image of himself. The trash was overflowing. Take-out pizza boxes and Chinese food containers cluttered the dining and coffee tables. Dirty socks on the carpet. I'll spare you further details, but trust me. It was worse than a college-student apartment during finals.

The worst part, though, was that the light-my-fire angel was completely burned out. Textbook midlife crisis. Clinically depressed, perhaps. I inquired as to why he walked off the job. After all, he owed us an explanation. Here are some snippets from our interview:

Cupid: You wouldn't believe the pressure. In my field, there's no pleasing nobody. Maybe I'd been at it too long. I just wanted out.

Me: You sound jaded.

Cupid: I wasn't always. I'd been hooking up ladies and gents for ages and did a pretty good job, if I must say so myself. These days? It's tough. The whole industry has changed. The fights, the breakups, infidelity, divorce. The divorced were my most difficult clients. I felt like sayin', hey! Didn't I do a job for you already? What, it wasn't good enough the first time? And my commission the second time around was cut in half, and free if the split happened within the two-year warranty. These customers took up roughly 50% of my time. It's no way to do business. Then there's those who never connect. I really tried to help and, yes, I did achieve some success, but there's nothing I could do for that person who never steps outside the house. I wanted to tell them: Go to Starbucks, sit, relax, have a latte. Something. Give me what to work with. But direct client interaction was strictly prohibited. Go figure. I didn't make the rules.

Me: Correct me if I'm wrong, but you appear to be single.

Me: You get out much?

Cupid: Let's leave my personal life out of this.

Me: Okay . . . moving right along. Was there a single incident that pushed you over the edge?

Cupid: Let's just say I got a little too rough with the bow and arrow. My Superior ordered me to anger management classes, which were ultimately a success. So much that they were the ruin of me.

Cupid: I ended up a pacifist. Pro gun control, anti-war protests, the whole megillah. I can't shoot another arrow. It's not in me anymore. Goes against everything I stand for.

Me: I'm surprised. You're not anything like I expected.

Cupid: Marketing dreamed up the whole cutesy image. It's all PR. Really, I was nothing more than a glorified shlepper.

Me: Any closing comments?

Cupid: Just don't go blaming me if the goods turned out defective. Not my problem. Any product is subject to a certain amount of wear and tear. My job was to get people together. Period. What happened after that is not my headache.

Me: Have you ever been sued?

Cupid: Last time I checked, there weren't any torts for romantic negligence. Lucky for me since I didn't carry malpractice insurance.

Cupid isn't part of our mishpocha, but maybe he should be. Maybe he needs a makeover. A conversion.

Upon concluding the interview and agreeing to take a load of trash to the dumpster, one thing became glaringly clear. We need a new Cupid. And perhaps this is an opportunity for the Jewish people. Traditionally, Cupid isn't one of our mishpocha. His character is rooted in Roman and Greek mythology, not to mention that others have adopted and adapted him along the way. But maybe it's our turn. The role needs a makeover. A conversion, if you will.

If you think the role of Cupid isn't Jewish work, think again. We have a long history of matchmaking. Judaism considers marriage to be a mitzvah. This is right up our alley. If you share Cupid's newfound pacifistic nature, please don't buy into his love-hurts-so-chuck-the-arrows philosophy. Everyone knows love arrows make a slight pierce to open the heart so it can expand to make room for someone special. Right now, Cupid's not shooting and won't be any time soon. And as one songwriter expressed so well: "You ain't got that zing if you ain't got that sling/ Doo wop doo wop doo wop . . ." or something like that.

The time has come for one of our own to take the office of Cupid. We'll call him Jewpid. or if it's a her, Jewpidess, or something entirely different since there's the obvious rhyme issue with the word "stupid." We'll deal with that later. For now, the time is ripe. If America could elect an African-American President, the moment has arrived for a Jewish Cupid. The old one made a huge mess and we, the people, are ready for change.

People You See in Shul on The High Holidays

Passover in the South of France: My Behind-the-Scenes Report

WouldJew Believe #6
It Takes A Lot Of Faith To Be An Atheist
How Instagram Brought Back This Nostalgic Soup
What Makes Eli Run?
Comments
MOST POPULAR IN Jewlarious
Our privacy policy