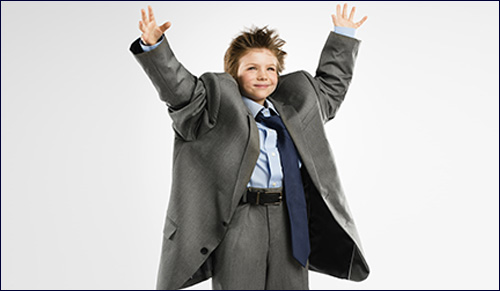 A few days after our daughter left for seminary in Israel, I called my friend Esther. I was still teary-eyed from our new status as empty-nesters, as our daughter is the youngest of our four kids. Now it was just my husband, me and the dog, whose cuteness barely compensated for the shedding. (I mean the dog, not my husband.)

“Don’t worry, they come back.” It sounded more like a warning than a promise.

“Esther,” I moaned, “we’re all alone now!” Who better to unload my sorrows on than Esther? After all, she had eight kids, all grown, and scads of grandkids.

“Enjoy it while you can,” she said with a wry smile. “Besides, they come back.” It sounded more like a warning than a promise.

Esther was clairvoyant. Jeff and I were happy empty nesters. We played music that we liked, danced in the living room with no fear that a kid would barge in and roll his or her eyes, and bought new furniture that was not kid-friendly, including a previously unthinkable beige couch and a glass topped coffee table with slightly sharp edges. I didn’t know where my kids were late at night in other cities or when they staggered home. Ignorance is bliss.

But then Esther proved correct again: They started coming back. First was our youngest son, who decided to help Jeff in the family business, which proved a godsend. I set a third place at the table.

Then our daughter returned from two years in Israel and reestablished residency in her room and the comfort of being reunited with the seventy-five pair of shoes she had not taken to seminary. An ambitious and creative cook, she helped me prepare terrific Shabbat meals and taught me to dress better. Now we set dinner for four.

I was sure this would cap it. Our two oldest sons had lived on the East Coast for several years; the eldest was married and the father of a toddler. While my daughter-in-law also hailed from Los Angeles and all four grandparents pined for our married children to return to L.A., living in Baltimore cost a lot less than living in L.A., so their return seemed unlikely.

But the married kids started to miss their parents, whom they began to view as eager babysitters who wouldn’t charge. A bitterly cold winter also took its toll. My son found a job in LA. When they announced their return, we were thrilled.

I offered to scout out apartments, especially since they were expecting baby number two shortly after their return. I figured they’d want to settle in as soon as possible. So imagine my surprise when my son sent an email blast to everyone in the family that said, “We’ve decided we are moving back in with my parents until we find an apartment that we like.”

I read that line twice. Not only were they returning to sunny L.A., they were moving back to my son’s room, even though he was bringing his family of three and 7/9ths. Instinctively, I moved the abrasive cleansers from under the kitchen sink and washed some plastic toys that I had saved from when my kids were little.

“Why don’t you seem happier?” Jeff asked me as we added the second leaf to the dining table. “Isn’t this the news we were dreaming of?”

“Of course!” I said, feeling shame-faced. “But after they get here, you’ll still go to work each day. Your life won’t change much. I, on the other hand, will have to take a writing sabbatical and while helping take care of our granddaughter and soon, an infant! It’s a paradigm shift. Do you know if we still have those baby-proof cabinet locks?”

Before we knew it, our house was decorated in Fisher Price and Little Tikes. The dog had to scoot around the high chair to get to his bowl, when he wasn’t hiding under the bed from our granddaughter’s efforts to “make nice.” Everyone began to wear shoes in the house lest they step on the Cheerios our granddaughter enjoyed sprinkling like Pixie Dust everywhere. My daughter-in-law was very helpful but she was understandably tired. Our lives were no longer quiet. They were loud, messy, chaotic, funny and exhausting.

One afternoon I decided to take a shower. Our 21-month-old granddaughter, a budding locksmith, was just tall enough to finesse the door knobs and busted into my private bathroom. There she stood, not quite two and a half feet tall, with our old beagle as an accomplice. Both were staring at me. Both were retrieved post-haste by an authorized adult member of the house.

As the mess and the toddler-induced chaos grew, our other kids began to whisper: “When are they moving out?”

I shrugged and smiled. I decided the world could easily wait for my next book as I pulled my granddaughter around the block in the red wagon I bought for her, and later, snuggled in bed with her for an afternoon nap. I hoped my MacBook would survive the torment it received from her pounding the keyboard mercilessly if I so much as turned my head away for a nanosecond. I began to regret the beige couches, especially because I learned that blue pen will never completely wash out, despite the most careful cleaning of the fabric. It was impossible to put almost every useful implement up on high shelves for this exceptionally curious child.

Eventually, the married kids found an apartment, only six blocks away. Day by day I watched as they moved their things out and fought down an unexpected feeling of panic. When they left to spend their first night under their own roof, I cried. What chutzpah, to wreak such joyful pandemonium in my life and then just leave?

“But we’re having chicken fajitas tonight!” I said in wild desperation as they buckled my granddaughter into her car seat. I had gotten used to having the next generation under our roof. Even though they were no only six blocks away and not 3,000 miles away, it seemed far.

After they drove away, I looked around their room. They left a lot of stuff behind. It was such a nice afternoon I decided to stroll over there to make sure they didn’t need the PJs with the owl theme or the package of diaper wipes. And also to tell them I had a vegetable lasagna in the oven, plenty for all of us. Why should my daughter-in-law have to cook on moving day?

By golly, they’ll wonder how they ever got along without me.

The Shushan Times
Who Was Josephus? The Controversial Backstory of the Famed Historian
Should I Break Up, Get Engaged or Keep Dating?
Time Is Your Precious Commodity
Comments
MOST POPULAR IN Jewlarious
Our privacy policy