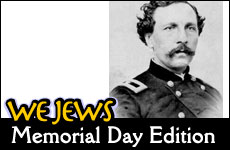 Fascinating facts about Jews who have served in the U.S. Armed Forces.

According to the Jewish War Veterans, We Jews have served in the U.S. Armed Forces far beyond our numerical proportion in the general population. More, we did so with distinction, receiving more than 52,000 awards, including the coveted Congressional Medal of Honor.

In honor of Memorial Day, here are but a few known but mostly unsung facts about our passion, our involvement, and our sacrifice.

LETTER FROM DANIEL: What I have experienced in the Army is far more profound than anything else in my life. I've learned that my mind can be my ally as well as my enemy. I had to teach myself how to be more flexible. I've learned how to push myself to my limits and, once there, continue. My biggest fear is not my death. It's the death of those whose parents and wives I'll have to see suffer. That's what makes me a solider. I want you to know that I love you and I will see you in a year from now. Love, Daniel

*The first Jewish officers in the New World fought in the French and Indian Wars. They were Jacob Judah, Michael Isaacs, Isaac Moses and Isaac Meyers. Meyers led a company across the Allegheny Mountains and served as captain.

*By 1775, there were about 2,500 Jews populating the colonies. Several hundred were of military age. There were at least 27 Jewish officers in the Continental Army.

*In South Carolina, about two dozen men recruited from a largely Jewish part of Charleston became known as a “Jews’ Company.”

There were about 2,000 Jews in America in 1776, and they were devoted patriots during the Revolutionary War:

*Jews also helped finance the War. Haym Salomon lent a fortune to the Continental Congress. The money was never repaid, and Salomon was bankrupt when he died.

*The Jewish Paul Revere of the South. "First Jew In South Carolina To Hold Public Office And To Die For American Independence” opens the inscription on a commemorative stone in honor of Francis Salvador, erected at the time of the bicentennial celebration of the Jewish community of Charleston, 1950. Salvador came to Charleston (Charles Town), South Carolina from his native London in 1773, and served with distinction in the creation of his state and his new nation. In 1775, he was the first Jew elected to public office as delegate to the first South Carolina Provincial Congress. A patriot, participating as a volunteer in an expedition against Indians and Tories, he was killed in an ambush near the Keowee River in 1776, thus also becoming the first Jew to give his life in the Revolutionary War

Brother Against Brother: The Civil War

Jewish-Americans fought in this most tragic of wars on both sides of the battlefield, blue and gray.

*The banking firm of Seligman Brothers provided financial support to the Union Army.

*Judah Philip Benjamin served both as Secretary of War and Secretary of State for the Confederacy. The Confederate States of America (CSA) had at least 23 Jewish-American staff officers.

*Surgeon General David de Leon of S.C. was the first Surgeon General of the Confederacy – and his counterpart for the Union was Dr. Jonathan Horowitz.

*When General Robert E. Lee surrendered to General Grant, present at the ceremony on April 9, 1865, was Benjamin B. Levy, one of a six (some say seven) Jews awarded the Congressional medal of honor

*The only known Hebrew military cemetery outside of Israel is the U.S. Cemetery for Hebrew Confederate Soldiers in Richmond, Virginia, where 121 Jewish Confederate soldiers are buried.

*Despite the fact that thousands of Jews fought in the Civil War, it was reported in “Jewish Soldiers in the Union Army” (North American Review, December, 1891), that few, if any, served. To set the record straight, social activist Simon Wolf not only responded with facts in an article of his own “The American Jew as Patriot, Soldier and Citizen" (published in The Washington Post soon after), but in 1895, Wolf, whose friends included both Grant and Sherman, published the names of 7,000 Jewish Civil War veterans.

A MOTHER’S GRIEF … Rebekah Hyneman's last letter to son Elias about the death of her other son.

Oh, my dear one. He died, God rest him without a struggle, without a moan. When he calmly told me he was dying and wished someone to read the prayers for him, I felt as if I could not endure it. He left a kiss for you with his dying lips and loved you to the last. May his pure spirit hover over you, my treasure, and turn aside every weapon that is aimed against you. Sorrowing Mother

*Elias Hyneman, a soldier with the Pennsylvania Cavalry, during the Civil War, could not get a furlough. One week later, his regiment participated in Kautz's Raid. Elias saved his comrades, but was captured and died in Andersonville.

The most famous and most photographed symbol of courage in battle is, of course, that of the U.S. Marines raising the flag atop Mount Suribachi on Iwo Jima. The photo, shot during combat, was taken by a Jew, Joe Rosenthal of the Associated Press. He was awarded the Pulitzer Prize for this remarkable achievement.

In the preamble to its National Constitution the purpose of the JWV is excerpted:

To maintain true allegiance to the United States of America; to combat whatever tends to impair the efficiency and permanency of our free institutions; to uphold the fair name of the Jew and fight his or her battles wherever unjustly assailed; to encourage the doctrine of universal liberty, equal rights, and full justice to all men and women; to preserve the memories and records of patriotic service performed by the men and women of our faith; to honor their memory and shield from neglect the graves of our heroic dead.

To those of all stripes who have given their lives for a principle, and to their families, there can be no higher mitzvah. Thank you.

My Life as a Jewish Cartoon

Sideways
Why My Iranian Mother Didn’t Want Me to Become a Religious Fanatic
The Jewish History of Prague
Why the Sexual Revolution was Bad for Women
Comments
MOST POPULAR IN Jewlarious
Our privacy policy
Aish.com Is Looking for Great Writers