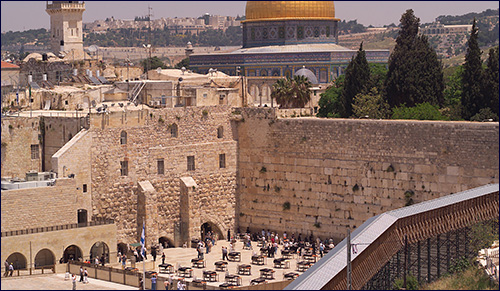 On my recent trip to Israel I came across some things that made me smile. Come look at my pictures!

5. Israeli men are remarkably comfortable with their feet

I just returned from a trip to Israel and there’s no better place in the world. To walk the same streets of our Biblical heroes, to speak their language, to eat their shawarma – it’s a true privilege. Sure, like any country, Israel has its idiosyncrasies, but I’m sure Israelis would have a lot to say about the current mayor of my home town of Toronto so who am I to judge. Nonetheless, I took pictures of a few of those “quirks” and now I’m sharing them with you. It’s your lucky day.

1. Bus drivers enjoy speaking with their friends in the middle of their shifts

In Canada where I’m from, I take the bus occasionally and the drivers seem quite preoccupied with their schedules, their routes, you know, bus driver stuff. In Israel… not so much. Bus drivers seem to be, well, enjoying themselves. They listen to the radio, get off the bus to buy snacks, and stop to chat with their friends. That’s what happened here. A short break to catch up on old times: 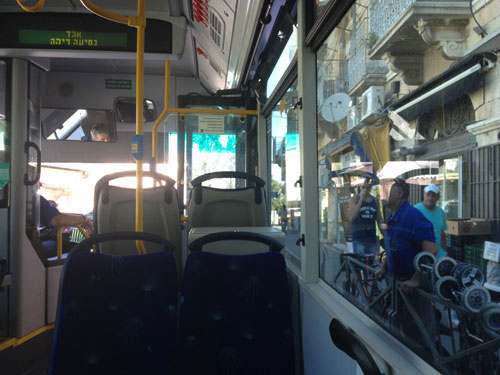 Every store owner likely thinks his products are so good that anyone would want to buy them. In Israel “anyone” apparently includes the messiah. For those of you who don’t speak Hebrew, this store is called “Pitzuchei Mashiach” or “Messiah’s Nuts.” I’m no Israeli marketing expert but I suppose what this is supposed to imply is that these nuts are so tasty that even the Messiah will want to eat them. I don’t know if the Messiah will like nuts when he comes, but if he will, I can vouch: they’re pretty good nuts. 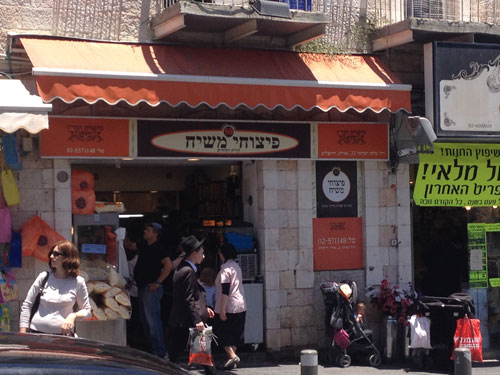 In North America, a pedestrian waits for the traffic signal to turn green and he crosses. But where’s the fun in that? Israeli streets on the other hand are usually composed of multiple increments so pedestrians can look forward to crossing one segment and getting held up by the other two. Personally, I recommend bringing a snack. At crossing one, why not try Messiah’s Nuts and at crossing two, how about Goliath’s Gobstoppers. 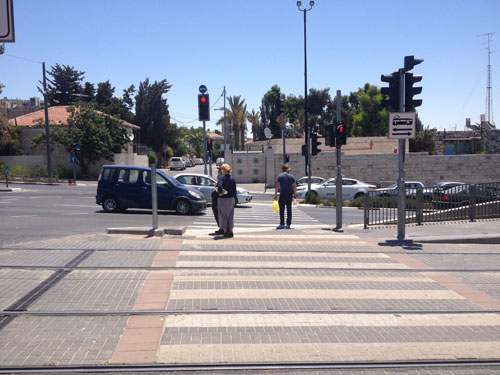 When I was in Israel it was 35 degrees Celsius (95 F) and I was sun burned and perspiring like a geyser. Not so for the Israeli ultra-orthodox public. Take a look at this rabbi here. He’s wearing approximately twelve layers, standing in the scorching hot sun, and not a bead of sweat. If this is not a proof of God’s existence I don’t know what is. 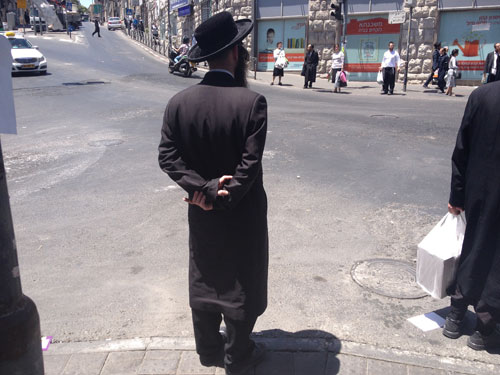 5. Israeli men are remarkably comfortable with their feet

I get it. Shoes and socks in the summer are a recipe for sweaty feet. But it takes a confident man to just let his toes hang out there for the whole world to see. Well, Israeli men are confident alright. Here’s a pic I took in shul one morning. Two guys and their feet. Ain’t no thing. 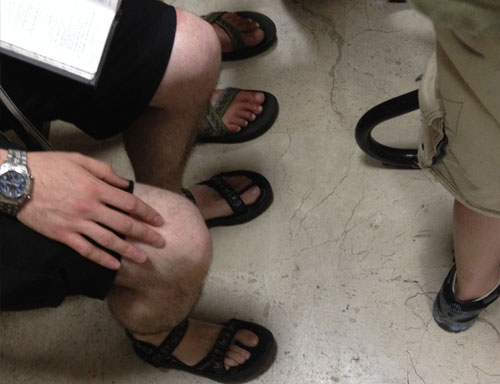 Who doesn’t love a refreshing glass of lemonade on a hot summer day, and when it’s served by cute kid, all the better. Well in Israel, you’ll have to quench your thirst on some rugelach and challah. Sure it’s “different” but it’s just as cute. 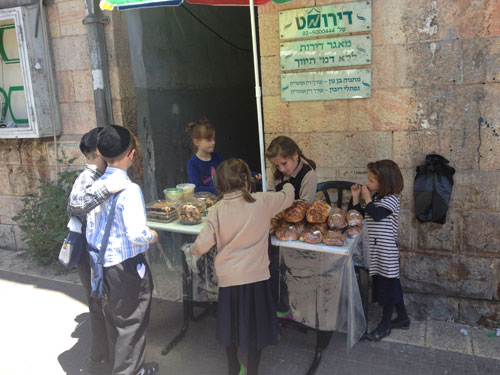 Itzik, I know your air conditioning wasn’t “broken.” Every taxi driver’s air conditioner in Jerusalem can’t be broken at the same time! Is this some kind of sick taxi conspiracy? Why can’t you guys just let us have a few minutes of cool down while you drive us to the old city? Why?! 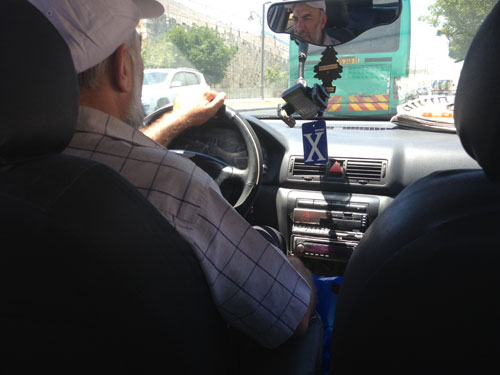 8. Flushing a toilet in Israel is a moral decision

Israel is a small country in the Middle East where water is scarce. Not surprisingly, conserving water is a patriotic act. So much so that every Israeli toilet has two buttons, one for a small flush and one or a big flush. So before you reach for that lever think long and hard and ask yourself: Do you really need such a big flush? 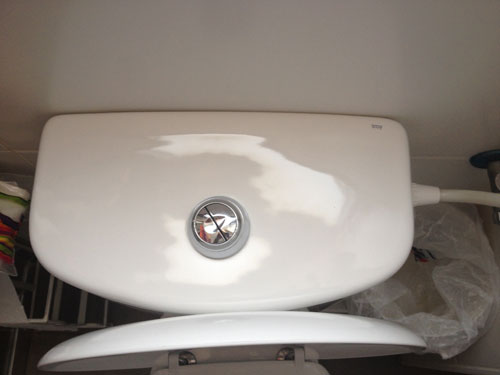 I arrived at the airport at 3am for a very early 5am flight. I could hardly open my eyes, let alone go shopping. The same can’t be said for my fellow Israeli passengers. I have honestly never seen that kind of excitement over any kind of shopping in my life. And these people were absolutely ecstatic to be purchasing chocolate and perfume at three in the morning. I looked at some of the prices and they didn’t look all that impressive to me. Maybe “duty free” loses something in the translation to Hebrew and they mistakenly drop the word “duty.” Any other ideas, because I am all ears. 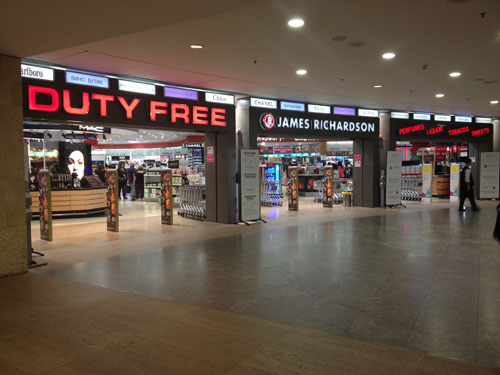 10. Israel is the Wild West of parking

Back home, I parked in a no parking zone for about 2 minutes while I ran into a store. When I returned, a parking ticket awaited me. In Israel however, you can park wherever your little heart desires. There’s actually an art to finding the most inconvenient spot for everyone else. Take a look at this fellow for example. This is Meah Shearim street which is perhaps the narrowest street in Jerusalem. So narrow that you wonder how a car can even navigate it. Well how about navigating it with a car now parked on the sidewalk: 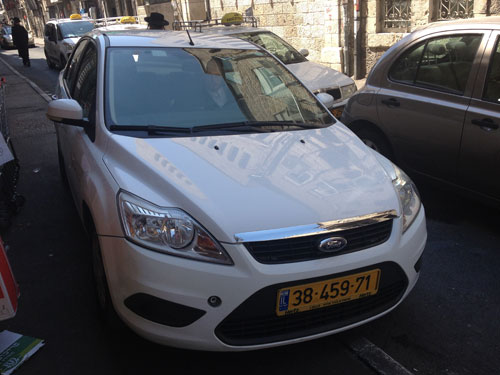 As a consumer in Israel you have two choices:

You have no other option. You may not, for example pay for a package of 12 shekel gum with a 50 shekel bill. That would require the proprietor to give you 38 shekels of change, which he will tell you that he doesn’t have. After you inform him that the smallest bill you have is 50 shekels (the equivalent of about $15, you high roller), he will then “discover” 38 shekels of change. Then he will yell at you. For buying products in his store. 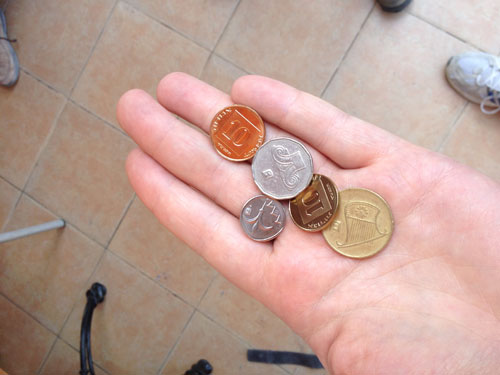 If you lived in a country where it costs around $150 to fill up your car with gas thanks to an Arab boycott, you’d get creative with transportation options too. Public transit in Israel is fantastic, and there’s nothing with a little walking, but how about a moped? It’s great on gas and is just as good as a car, except for the helmet hair. As a matter of fact, Israelis of all stripes love their mopeds including charedi Jews. If you bought into the stereotype that charedi Jews are meek and sit inside all day, don’t. This charedi Jew has a need for speed: 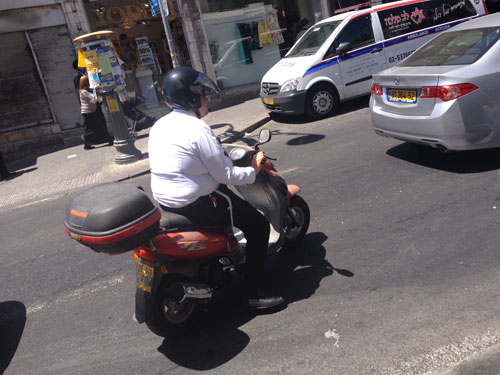 Have you seen those retirement commercials where you finally get to sit on the beach and travel the world. Ah, now that’s the life, right? Not in Israel. When you retire, it’s time to head back to the study hall and bone up on your Jewish studies. Come to think of it, this entry isn’t funny it’s actually kind of awesome. 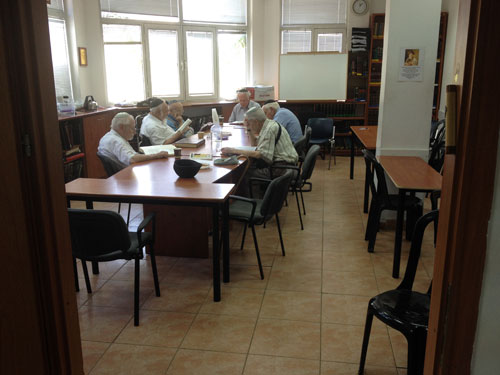 In one of Jerusalem’s most upscale neighborhoods there is a large piece of land which sells what appears to be jugs. Keep in mind that real estate in Jerusalem is exceedingly valuable. This property is probably worth many millions of dollars. Yet they sell…jugs. You’ve got to sell lots of jugs for that math to make sense. Yet every day I walked by this store and not once did I see any commercial activity. I guess the Israeli jug market’s just not what it used to be. 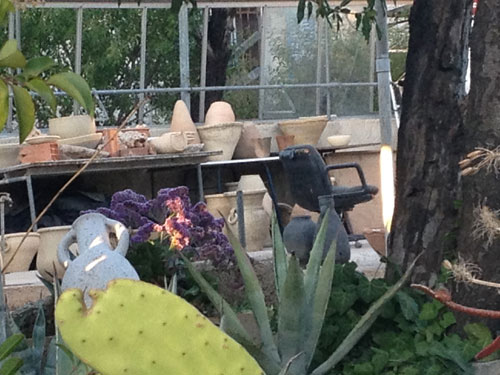 If Israel had a national cleaning utensil it would be the squeegee. In my travels around the world I have never seen it used anywhere else but it is beloved by Israelis of all stripes and it seems to work. Israelis are often compared to the sabra fruit – prickly on the outside but soft on the inside. I’d like to propose another analogy: Israelis are like the squeegee: their approach to life may appear different but they always get the job done. On second thought, let’s stick with sabra. 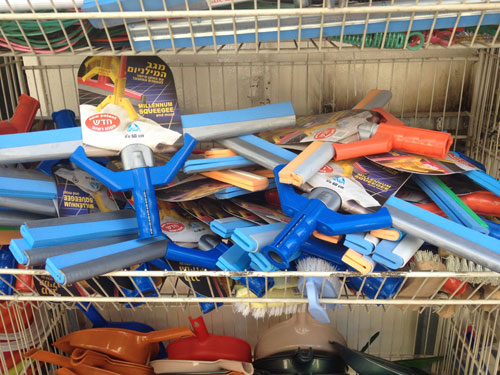 Not Your Typical Nice Jewish Boy
Should I Break Up, Get Engaged or Keep Dating?
Time Is Your Precious Commodity
A Constant World in Flux
Comments
MOST POPULAR IN Jewlarious
Our privacy policy