Walking Through the Valley of Death 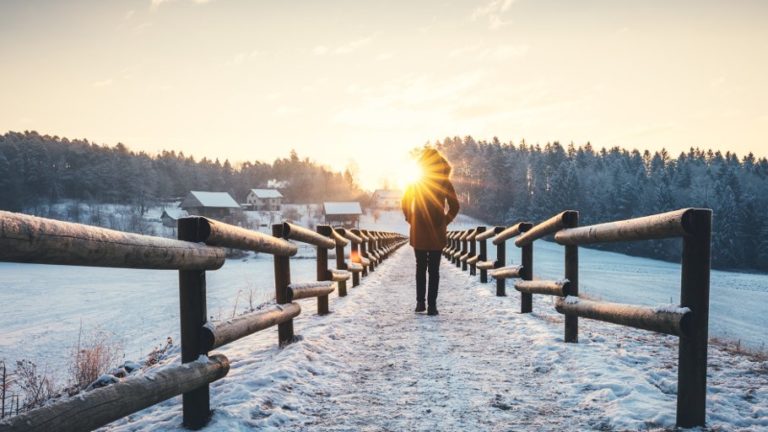 Violated as a teen, isolated and alone, a young woman discovers a way back to spiritual and physical health.

I was 15 when trauma overshadowed my life. I wasn’t yet able to comprehend the tortuous impact being violated had on me because I was a tough, “cool” teenager with that exterior façade built to protect me from harm. It had seemed that nothing could faze me ever.

I certainly wasn’t going to tell my parents, or even my closest friends. I just recoiled within myself and didn’t share the details because I was too embarrassed and devastated.

I tried to open up to only one friend, but two weeks after I confided in her, she moved to North Carolina when her father’s company suddenly transferred them. We were separated by a vast physical distance and too young to know what trauma was and that I needed help.

My parents could not tell that something was wrong because I still looked, on the outside, like their same aloof, rebellious teenage daughter. Lack of communication was my norm. And how could I tell my mother what had happened when she had grounded me for being out late the night before? In my immature mind, I viewed everything that had happened as my fault. Unrelenting guilt devoured me. I wore dark, baggy clothes to hide in; they resonated with the shattered way I felt inside. Suicidal, depressing thoughts engulfed me. The world was a scary place with evil people that couldn’t be trusted.

Depressing thoughts engulfed me. The world was a scary place with evil people that couldn’t be trusted.

A month before my sixteenth birthday, my friend’s mom lent me a book by Dick Gregory, “Cookin’ with Mother Nature.” His book testified how he lost over 200 lbs., going from morbid obesity to a slim, healthy athlete.

I don’t remember why I was willing to read his book. I didn’t care about anything. I was failing most of my classes in high school. Who cares what we eat? He wrote about the connection between the food we consume and how we feel. Could it be that all the sugar, candy, ice cream, junk food, French fries, pizza … my whole teen diet… could exacerbate how depressed I was?

Somewhere inside of me was a spark of life bursting to be reborn. My soul was desperate to emerge from the pit of despair where I was stuck for so long.

I had never stopped praying. I didn’t know Who else to turn to in those bleak days when I was feeling so alone. I don’t know what influenced me to pray, but from the very beginning, I did… “God… I feel so dirty, disgusting and yucky. I feel lonely and hopeless…. What’s the point of being alive in a world where people hurt each other?”

I knew I couldn’t control anything or anyone around me. I could only make choices about myself.

If I would take care of myself, maybe that meant I was worth something. Maybe my life mattered.

Something inside compelled me to choose life. Right then I decided to go “cold-turkey” from the junk-food diet, from smoking and drinking and drugs that I consumed and focus on eating fresh fruits for breakfast, salads for lunch, whole grains and vegetable soups for dinner. It was an inner physical cleansing that could cleanse my mind, heart and soul. If I would take care of myself, maybe that meant I was worth something. Maybe my life mattered.

And slowly, cautiously, tentatively, I started running in the morning before school. It was only ten minutes around the block, but it was a beginning of a new life.

This new routine evolved into going to sleep early and arising by 5:30 am. Ten minutes became twenty, then thirty, and eventually an hour in the awesome fresh morning breeze. Awakening before sunrise, hearing the chorus of chirping birds surrounded me with a buoyant feeling of renewal and rebirth. Running was like flying.

It began with that first step around the block: invigorated, revitalized and restoring that lost sense of self-esteem and self-respect. And off the “typical American diet” it seemed like my brain was coming out of a fog. I could learn, absorb, study and pass exams in school again. My grades in school went up. My communication with my parents improved dramatically as I tried to make up for how disrespectfully I had treated them. Though I sometimes laughingly wondered if I was running away from my problems or running into a new future, those morning runs were a soothing, therapeutic, meditative time of prayer, reflection and contemplation, a time of healing and reconciliation with my inner being and with God Who I had felt estranged from. It was during those walks that I sensed that God was always by my side, coaching me on. He had never left me though I had left Him.

Two years after I started running, three years after the trauma, I was diagnosed with life-threatening cancer. I was only 18 and I was sure that the early trauma was connected to my illness. How could my body fight back when I had wanted to die?

But everything was different now. I wanted to live!! I had to live!

I couldn’t run after major abdominal surgery, but I could walk, though at first it was excruciatingly painful.

I survived that cancer, but six years later I found out that the operation and radiation that helped save my life also made it impossible for me to have children without undergoing more invasive treatment. I didn’t want more drugs and more operations, but I walked through that challenge. Thank God, I walked through births and raising children.

I walked through cancer again when I was 44, 26 years after the first battle with cancer. Twenty-six years of precious life – the number that represents God’s Name of compassion. I walked through more surgeries, more radiation treatment and chemotherapy, feeling God’s tremendous love surrounding me.

Walking was my route of escape from the death dungeon I was entrapped in for one horrible year when I was 15. It was my way of claiming back my self-worth.

Walking almost every morning became my way of getting through a long list of ordeals, feeling God by my side, helping me always. I pray. I say Psalms. I say thank You. I pray that no one should feel alone. Support exists and God has many ways to help us.

It’s been 40 years since I first ventured around the block for ten minutes. Forty is that auspicious Biblical number of rebirth: of wandering in the wilderness for 40 years before entering the Promised Land; and 40 days between the beginning of the Hebrew month of Elul, until Yom Kippur, the annual season of teshuvah. Forty is the number that represents the power to lift a spiritual state, to be purified and transformed.

For me, every step is another opportunity to thank God and celebrate the precious gift of life, the life that I can hardly believe I am here to live.

*Note from the author. Looking back 40 years, I definitely needed post trauma counseling, but I did not have the awareness then to know how to get help or know what my options were.

If you notice that your child, loved one or friend is acting differently – sad, defiant, rebellious or withdrawn – they may be suffering from something that happened that they are afraid to tell you or anyone about. Reach out. Ask questions. Get help. Walking is a highly recommended endeavor that stimulates healthy production of beneficial endorphins but it is not a substitute for therapy.

Naomi Freeman is a freelance writer and support counselor for women in crisis. She has been living in Jerusalem with her husband and children for over thirty years.

My Adventures in Saying Kaddish

You've Got a Friend: A True Story about the Power of Connection
Megillah Gorilla Saves the Day
Challah Reuben “Grinder”
Big OnThe Little Things
Comments
MOST POPULAR IN Spirituality
Our privacy policy
Aish.com Is Looking for Great Writers